Electronic music and the past: Chema64, Kraftwerk revisited, and Gqom. 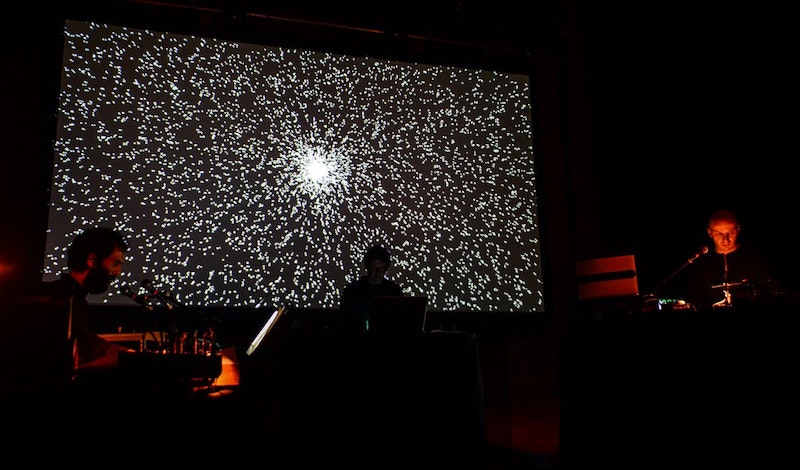 Electronic music with its bleeps, bloops and tortured sounds is still considered future music, made by computers for dancing robots in the coming dystopic utopia. And yet, no matter how electronica looks ahead, it remains mired in the past and tradition; electronic music has been around about 100 years now, and has its own branches, side branches, and deep roots. Making noises on the computer isn't just about the future; it's about which past's version of the future you're picking up—or which future's version of the past.

The 2015 album Viziers is an apt example. Chema64, located in Mexico, is a chiptune artist, which means he makes music entirely from videogame noises. You might think that would sound gimmicky or stilted… and it does, a little. But it's also kinetic and percussive and crazed. The opening track, "s u n s e t" is a wall of blaring, glitzy cyber-adrenaline, the sound you'd get if an entire arcade full of machines decided to form a metal band. The brilliantly named "Sailor Doom" is similarly revved up, but with a fey lyricism, like Aphex Twin playing Space Invaders on ecstasy. "Shadow Force" layers skittering laser sounds over a plodding, ominous beat as the pixilated forces of the conqueror land to turn the resistance into stylized exploding blots. The album is ridiculous but also sublime, a 1980s future of bad clothes and retro spacesuits. On Viziers, nostalgia is a machine to chop into bits, turbocharge, and reassemble for lift off.

Another jump into future past is Franck Vigroux and Matthew Bourne's 2015 album-length cover of Kraftwerk's 1975 classic Radio-Activity. Three decades on, Kraftwerk still sounds fresh: they've influenced not just electronic music, but also hip-hop, indie, and just about everything else. Vigroux and Bourne, contemporary classical composers, don't so much update the sound as examine the nooks and crannies in which it's currently jerking and sparking. Their version of the title song "Radioactivity" adds lots of psych fuzz and heavier bottom, revealing that beneath the adorable children's song ("Radioactivity/discovered by Madame Curie") there lurks a grimy, ominous threat. The clunkily lyrical "Ohm Sweet Ohm" is outfitted by Vigroux and Bourne with piercing high-pitched noises and drones—and still comes out sounding clunkily lyrical. Vigroux and Bourne's future is less cold, less doofy, and more aggressive than Kraftwerk's. But at the same time, their future is Kraftwerk's, because that's what they've made their vision out of.

The recently released compilation Gqom Oh!: The Sound of Durban, isn't as explicit about its connections to the past, but those connections are audible nonetheless. Gqom is a street-level, stripped-down version of house music, popular in Durban, South Africa, and as an export in London. The music is all repetitive bass and percussion; the tracks sound like they were put together in someone's basement, and often were. The echoing, sweaty thump comes across as a cyberpunk soundtrack, but also consciously references traditional music. Dominowe's "Africa's Cry" includes muscular chanting and a maybe human, maybe electronically-created yodeling wail; it feels like a drum circle attended by half-rusted through and dying robots. Formation Boyz's "Jungle Anthem" is built around a sampled or recreated drum figure, which it then loops over and over again, creating a trance pattern from a trance pattern. The performers are consciously reconnecting house, electronica, and techno to their roots in African (broadly) and South African(specifically) models, and then making the latest, hippest, low-fi future out of the materials they passed off to others and then took back. For Gqom, like Chema64 and Vigroux and Bourne, the binary data ahead is the binary data behind; it just sounds different when you re-encode it.