Inspired Alchemy of the Selected Smiths

The emotional articulation of Meat Is Murder and “This Night Has Opened My Eyes.” 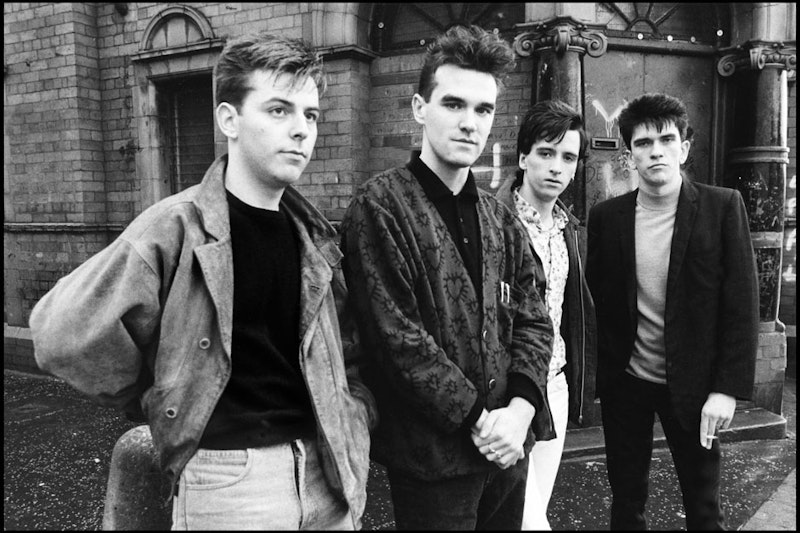 Despite covered frequently by artists of disparate dispositions, “This Night Has Opened My Eyes” by The Smiths always gets the short shrift in any discussion about the shooting star band. The Smiths were around for just five years, but were remarkable for their 1960s work ethic of at least one or two albums a year, half a dozen singles, and constant touring. Their white-hot run, undertaken without a manager or Brian Epstein-like sage figure, was cut short by the most clichéd and sadly common reason imaginable: lack of communication. People make fun of the Metallica documentary Some Kind of Monster, but I think every serious band that finds themselves in dire straits emotionally should take some cues from that movie and talk through their issues, with or without an outside observer. Just don’t film it. The Smiths arrived fully formed and dissolved without any indignity in embarrassing moments or ill-conceived new phases. Morrissey and Johnny Marr never talked about it—when a relationship becomes that toxic, it takes only the smallest of disagreements to have one or the other jump ship, desperate for freedom and change. Bitterness, stubbornness, and solo careers suffocate the chance of any reunion as years go on.

Since their inception in 1982, The Smiths have never left the cultural consciousness, and their resonance with teenagers and twentysomethings of a certain disposition across generations shows that they’re a band out of time. Personally, I don’t care for much of their music, and I’m not a huge fan by any means. The only LP of theirs that really does it for me is Meat is Murder, a flawless set from start to finish. I vividly remember my dad giving me a copy of the CD when I was nine, and insisting I listen to “What She Said” and the title track first. “What She Said” is a sonic explosion, and to my dad it’s gold, one of the best rock songs of the 80s. But the song “Meat is Murder” just stained me: the distant sound of buzz saws rise as one ominous reversed piano note repeats, and then come the heifer whines, preparing to die—and then Marr’s sorrowful and unresolved, cyclical guitar figure begins the death march. Even at nine, you’re already exposed to so much tempered horseshit about diet, exercise, human rights, and drugs, and that PG-rated PSA attitude is so easily dismissed by all kids, precocious or not. And it never works! Bring a junkie in and have them shoot up in front a class of elementary school kids—none of them will ever go near the spike. “Meat is Murder” is one of the most moving and fully realized political songs I’ve ever heard, in the same league as “This Land is Your Land.” It did nothing to change my diet, but Morrissey’s lyric isn’t as much a plea for peace as an assault on the listener. He knew how few minds he’d change, so he took to abusing his own audience for their complicity in industrialized violence against animals. On paper, it’s gauche and on the nose, but as always, the line is thin.

As far as preferred performances and versions go, the line between magic and a dead, flat sound is even harder to locate. “This Night Has Opened My Eyes” is my favorite Smiths song by a wide berth—it’s the only Smith number I have time for besides the entirety of Meat is Murder and “Girlfriend in a Coma.” For one thing, it dispels the myth of The Smiths’ rhythm section as nothing more than hired hands along for the ride—Andy Rourke’s slithering and suspicious bass line and Mike Joyce’s restrained drum take are as distinctive and essential to the song as Marr’s intricate guitar arrangements and Morrissey’s beguiling and impressionistic lyric. Though he lifted many of the song’s best lines from Shelagh Delaney’s A Taste of Honey, the final result is the kind of ineffable alchemy and seemingly effortless emotional distillation that only music is capable of. Morrissey sings with wonderfully affected woe and removed caution about babies left in rivers, on doorsteps, playing on swings, and a nebulous sense of grief and loss whose edges can’t be located and thus pervade like an invisible fog. Though it’s clearly about abortion and its complicated emotional aftermath (perfectly illustrated in the Tumblr-ready line “And I’m not happy and I’m not sad”), “This Night Has Opened My Eyes” is ripe for interpretation and projection, an inspired fusion of music and lyrics that articulates an emotional state that we all know but have no name for.

The canonical version of “This Night Has Opened My Eyes” was completed in one take for the late great John Peel’s radio show in 1983. A subsequent attempt to record the song in the studio proper yielded little—this version remains officially unreleased, and for good reason. Besides a couple of minor vocal flourishes, the song’s arrangement is identical, but somehow it sounds more like the product of a radio session than the languid, immaculately executed John Peel recording. Maybe it’s as much of a fluke as Marr and Morrissey meeting each other in the first place.

As much as I love “This Night Has Opened My Eyes” and Meat is Murder, the rest of The Smiths’ music still strikes me as absurdly maudlin or silly. “There is a Light That Never Goes Out” has that same dead, plastic sound that renders the above re-recording effectively useless, and Morrissey’s lyrics cross that line into schlock—I can’t explain why “to die by your side is such a heavenly way to die” hits me as Hallmark, but the preening synthesizers certainly don’t help. Even after 500 Days (of Summer) brought The Smiths to the forefront of pop culture again in 2008, everything I heard in the echo chamber that year was soap-opera Smiths, not the regal sound of Meat is Murder, or the complex alchemical emotional articulation of “This Night Has Opened My Eyes.” There’s plenty of time for my appreciation to bloom—I’m surrounded by Smiths super-fans: my dad, my brother, and my girlfriend love everything and know all the minutiae I can’t be bothered with. Finally, I know what it feels like to talk to me about The Smashing Pumpkins. It’s humbling to say the least.