Quick, what does bluegrass gospel have to do with heavy metal? 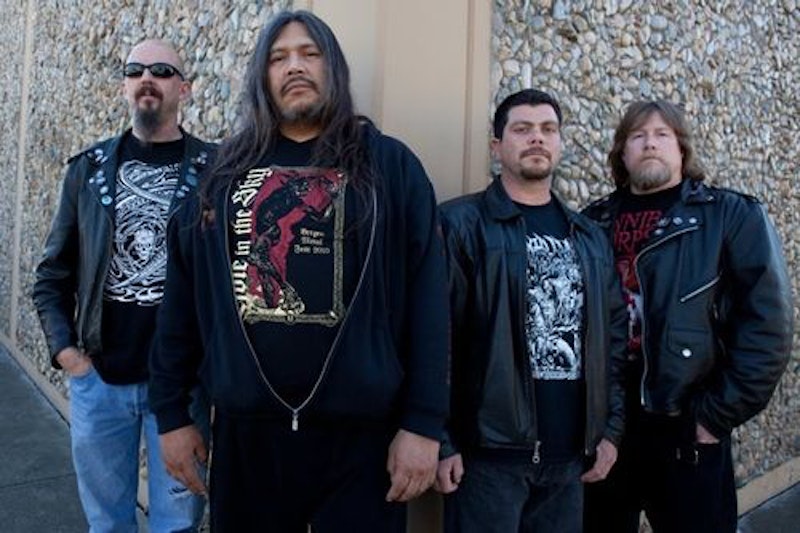 Everybody loves pop music that sticks it to The Man. Whether it's Dylan nasal-ing about how the times they are a changin’, Johnny Rotten extolling anarchy, or Public Enemy fighting the power, somebody (usually Greil Marcus) can be counted on to gush about the apocalyptic awesomeness of shaking your butt on behalf of the downtrodden.

Don't get me wrong; I love Dylan and Rotten and PE too, and I don't wish Greil Marcus on any of them. But it's hard to ignore the fact that, despite all their enthusiastic anarchy and change and power-fighting—or, more likely, because of it—they're all extremely popular and critically validated. They're charismatic rock stars swaggering for freedom and equality, which makes them icons of liberal capitalism, not opponents of it. If you want something that actually questions the values we hold dear, you need something a little less individual, a little less media-genic, a little less virile—and maybe a little more dead.

If you're looking for death in popular music, the go-to genres are (obviously) death metal and (perhaps less obviously) bluegrass gospel.  Two recent releases, one from each genre, make the point quite clearly. Autopsy's massive retrospective All Tomorrow's Funerals, collecting all their EPs, starts with the new title track "All Tomorrow's Funerals," five minutes of zombie-demon vocals and dry-heaving spasms of drums and classic rock riffs, closing out with a doomed trudge to the grave. Doyle Lawson & Quicksilver's Sing Me a Song About Jesus gets to the afterlife almost as quickly; the second song, "The Rich Man," is a quick, cheerful bluegrass rave-up with patented fleet-fingered solos about how the rich on earth better do some serious thinking before they face the judgment.

It's not just their moldering fascinations that link death metal and bluegrass gospel, though. It's their resolute un-hipness. It's one thing to be ready to die for love or to burn out rather than fade away—it's another to just be really excited at the idea of corpses. It's hard to read through Autopsy's track list without giggling: "Mauled to Death," "Feast of the Graveworm," "Squeal Like a Pig," "Dead Hole." On the one hand, Autopsy is certainly in on the joke, but that doesn't exactly mean they don't take it seriously. "Destined to Fester" from the classic 1991 EP Retribution for the Dead is like Rush hit in the head with a brontosaurus, the giant prog outlines slowed down into giant dragging Sabbath-slabs, Getty Lee's high-pitched wails turned into garbled grunts, the flashing guitars thumped into detuned monstrosities—misshapen, but still, too geekily awesome for cool.

Similarly, the Lawson track  "Little Star,” narrated by one of the wise men, is every bit as clunky as that conceit suggests. "Twinkle, twinkle little star/how we wonder what we are/they say beneath your diamond glow/there's someone we should get to know." The music shuffles along in the folksy, polished, Prairie-Home-Companion vein that Alison Krauss has made the sound of contemporary bluegrass. Between those earnest lyrics and the we-wish-we-were-AOR-but-we're-not-sure-how-to-get-there backing, it's a fairly embarrassing package; one of those things that you want to listen to with the car windows rolled up.

Both Autopsy and Lawson are, in their own way, morbidly corny, like plaid body bags. The technical virtuosity at the heart of both genres is the nail in the coffin, whether it's the perfect surging a cappella harmonies on Lawson's "Going on Home" or the tight quick-march tempo changes on Autopsy's "Keeper of Decay." In either case, there's a deliberate de-individuation, a determination to disappear into the demands of their respective idioms. "No, I won't sell out for money/fancy home or big fine car," Lawson sings. Or, as Autopsy puts it, "Face chewed to bits/On my body they feast/Swimming in the rancid sewage/Spreading their disease." For both death and bluegrass, the faith uses and consumes you, not the other way around.

For death metal, Autopsy is surprisingly, gloriously eclectic—from the mauled classic rock of "Broken People" to the punky hardcore of "Fiend for Blood" to the doom of "Retribution for the Dead," to weird masterpieces like "In the Grip of Winter," which stagger about the metal landscape with a lurching so intense it almost qualifies as zombie funk. Doyle Lawson, too has been an innovator, reaching out to other gospel traditions, most notably during his time with the Country Gentlemen on the great 1978 album Calling My Children Home. But while both certainly have star power and genius, they've also both turned that genius in many ways towards erasing themselves in the name of their particular faith and/or community and/or morbid obsession. Musicians aren't meritocratic heroes whose rebel yawp frees us from regimental squareness. They're just indifferently-dressed corpses marching into the pit like the rest of us, listening to those demon grunts and high-lonesome hallelujahs which someone else will be singing when we're gone.