Basking in a batch of new records to stave off consumption. 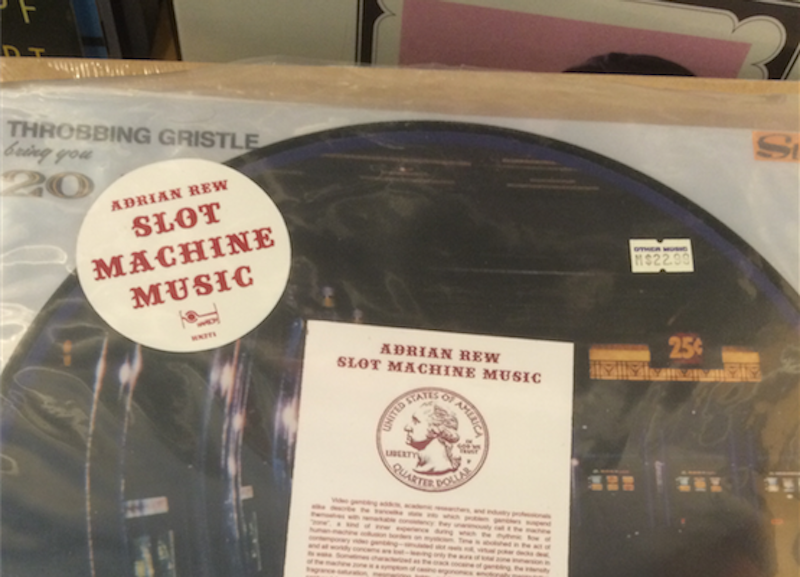 On a bone-chilling night like this, a week into the new year of 2015, Adrian Rew’s Slot Machine Music is massaging my mind as the space heater does its bit too. I saw Rew play selections from Slot Machine Music—two continuous sides of sound collages compiled from field recordings of casinos—about 18 months ago at the Red Room up in Baltimore’s Waverly neighborhood, where he burned incense and sat face-to-face with the audience as the tapes played. He encouraged the audience to loiter and wander around as one would at Horseshoe, in the Red Room that holds about 25 people max. I traded him a tape for a CD-R and just found the liner notes he mailed me while cleaning my room the other day. I was in Manhattan earlier this week and went to Other Music and spent too much money on records, which I don’t regret a bit because what I bought blind has blown me away. I was flipping through stacks of LP’s mindlessly when I saw Slot Machine Music, pressed by Hanson on a gorgeous picture disc as colorful and cozy as the music. Listening again, Rew’s collages felt so much more soothing and free of anxiety. It’s hard to tell if he’s melding his own drones and tones underneath the web of chatter, dings and pings of machines, and piped-in house music distorted at a distance. It was such a nice way to wind down after the Pharmakon LP Bestial Burden—brutal and beautiful but a hardhat’s necessary.

Less exciting was the latest Eric Copeland EP on DFA, Ms Pretzel. I feel like Copeland’s been coasting on the same basket of sounds and ideas since Limbo in 2012, the last thing he put out that felt transcendent and not just goofy. It sounds like he’s already requested to be buried with his flanger pedal; he loves the thing. Eric Copeland and the Flangers. Ms Pretzel has some nice lines and intense wigouts, like the very end of “A1EZOK.” The title track has bits of it, but the melancholy and menace of Hermaphrodite, Alien in a Garbage Dump, Strange Days, and Limbo are still scarce compared to the carefree monster mash that’s been his style on most of his recent singles and the full-length from DFA in 2013, Joke in the Hole. It’s getting a bit old, the genius of stuff like “Green Burrito,” “FKD,” “Alien in a Garbage Dump,” “Al Anon,” “Auto Dimmer,” “Doo Doo Run,” “Reptilian Space Beings Shapeshifting Bloodsucking Vampires,” and “Everybody’s Libido” were the pictures they painted, like of cavemen (“Everybody’s Libido”), monsters drinking lean (“Reptilian Space Beings Shapeshifting Bloodsucking Vampires”), venereal disease (“Narc”), gastrointestinal distress (“Doo Doo Run”), alien slums (“Alien in a Garbage Dump”), high school on Mars (“King Tits Womb”), panic attacks (“Al Anon”), and total transcendence (“Tarzan and the Dizzy Devils,” “Green Burrito,” “Auto Dimmer”).

Ms Pretzel grooves and it’s got better dynamics, brighter, and more to the point than last year’s Logo My Ego, but the melody lines are lacking that unsettling melancholy and anxiety that made Copeland’s previous work so vital. The press release says that Ms Pretzel “takes Eric’s outsider fascination with 4/4 dance music and twists it yet again,” but as a longtime fan and collector, it sounds like he’s coasting. I’d rather hear more unconventionally structured music like Strange Days than yet another take on dance music.

But now I’m staying warm burning Glade candles and listening to Muddy Waters’ live in Paris 1972, looking for anything thermal to put on or around my body before next week when I head to the Midwest, flatland of negatives, with no Muddy Waters download code to bring.