Azealia Banks Rolls a DeLorean, Perfects Her “Round the World” Snap 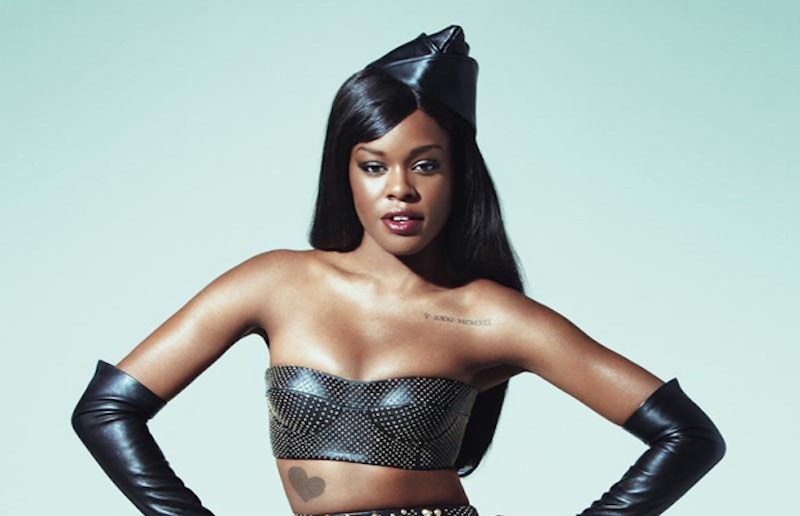 Broke With Expensive Taste’s weakness doubles as its strength: it’s of a piece—a single body of work, not (“212” aside) a singles jukebox. The production cadre here fire up a literal cultural melting pot of beats—Buena Vista Social Club fare, calypso, doom house, throwback 90s pop rap/R&B—while the marquee diva dogpiles internal rhymes whenever straight-up gulliness is called for and glides strong, resilient, and resplendent when the grooves demand actual singing. What Taste really simulates, almost effortlessly, is a Brooklyn traffic jam that somehow transforms itself into a kick-ass DJ set; and all the random weirdness gumming the works—the engines snarling at the beginning of “Heavy Metal and Reflective,” those Eno-esque synthesizers dissipating as “Soda” opens, the faux Gidget surrealism of Ariel Pink collaboration-qua-curio “Nude Beach a Go-Go”—is icing on the cake. Songs that made no sense as standalones gel shockingly well, in aggregate.

An argument is being made, in certain circles, that Azealia Banks is the least interesting aspect of her own debut. I would rebut that the circumstances are complicated. My sense is that Banks happened upon a group of fantastic beats before she had an opportunity to truly nurture a persona and cadence and become comfortable enough to play around, ad lib, and adapt. Is this a negative? I would say that it isn’t. There is a facile magic and an shallow showiness to some modern rap that lends it mainstream cache and appeal, a tendency to lean on ham-fisted punchline verses and meme-ready groaners while the production carries much of the water: Jay Z, Nicki Minaj, and Lil Wayne, I’m looking through you.

Viciously spit with a head-to-the-grindstone intensity, Banks’ verses are airtight, technically brilliant labyrinths of pith that refuse to pull-quote to themselves; like Taste itself, it’s difficult to unsnap them for one’s yearbook page, let alone rap them at home. The sheer, street-rap impenetrability of, say, “Yung Rapunzel”—“Who’s cooler than this, witch/Maneuver then dip, hip like the Ruger—this clip/Bitches Zooted and Sipped, I’m Suited and Zipped/Make a move or get skipped, sis ya “who it,” and hit”—damns Taste in terms of pop-level fandom even as it virtually guarantees cult bona fides among true rap diehards. The risk lies in the possibility that Banks might capitulate to what the marketplace of gold and platinum sellers demands—a tragedy that befell Ab-Soul’s most recent album, which is why no one is talking about it right now.