He was the star of George Harrison’s 1971 Bangladesh benefit. 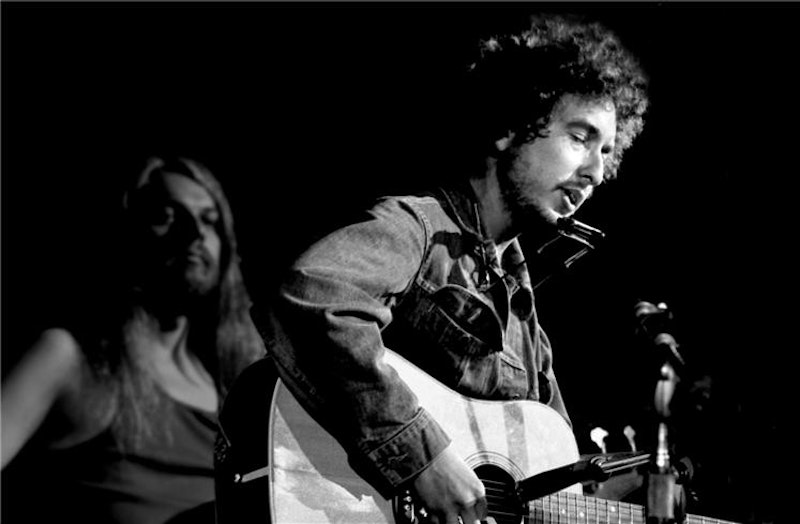 The history isn’t yet ancient, but with the upcoming release of Bob Dylan’s record of Frank Sinatra songs (Shadows of The Night), which is bound to be as dreadful as imagined, and his awful “Never Ending Tour,” I was thinking the other day about why his six songs performed for George Harrison’s Concert for Bangladesh in 1971 aren’t considered a highpoint of his post-’66 career.

Dylan was in limbo at that time, after the (unfairly in my opinion) critical trashing of 1970’s Self Portrait and equally hyperbolic, if temporary, praise for the squishy New Morning later that year. In 1971 he did record the rollicking “Watching the River Flow” with Leon Russell, and re-jiggered, with success, a few of the “Basement Tapes” songs for his second Greatest Hits record, but otherwise it was a fallow period, aside, perhaps from the catchy but trying-too-hard “George Jackson.”

Listen to Dylan’s contributions on the Bangladesh recording and it’s astonishing how riveting they are, especially since it took all of Harrison’s persuasion to get him to appear. It’s sort of like how Dylan, in the 21st century (and prior to that) whenever he’s on the tube mumbles and is often incoherent: I think that’s mostly an act, which is confirmed definitively by 2005’s documentary No Direction Home, in which his commentary is precise and articulate, the effort of a man who wants to control his legacy, rather than leave it to others. Yes, Martin Scorsese is the titular director—probably to lend credence to the project—but it’s clearly Dylan’s project (despite Dylan’s protestations to the contrary).

I was too young to see Dylan in his heyday (11 in 1966, the last time he toured for eight years), but did attend both his slightly disappointing “comeback tour” with The Band in ’74 (Nassau Coliseum) in which he shouted and spit out songs, and the more successful Rolling Thunder extravaganza the following year (“Night of the Hurricane,” Madison Square Garden). Living in New York in ’71, I wasn’t among the lucky 40,000 spectators who saw the two Bangladesh shows, although was glued to the radio for news of rock’s first benefit concert. Most of the record is fairly sloppy: Harrison’s songs not much different than the album versions, and Ringo Starr, who must’ve been out of his mind on booze and his drug(s) of choice, forgetting half the words of his fine hit single “It Don’t Come Easy.”

The songs the 30-year-old Dylan selected weren’t new, but at that juncture hardly “old chestnuts” either, and I guess he wanted to please the crowd. Opening with 1963’s “A Hard Rain’s A-Gonna Fall,” it’s obvious Dylan was not only on his best behavior, but cognizant that the concert was an historical event and even then with one eye on posterity, it’s a chilling version. Same goes for “Mr. Tambourine Man,” a ‘65 classic that’s given just a slightly countrified touch and is more alive than all the bootleg (and official) versions of the song from the acoustic portion of his 1966 world tour. On that tour, with the Hawks, Dylan was frenzied and singing with a never-again heard passion during the electric set, but was bored and gave laconic solo versions of “Visions of Johanna” and “Just Like a Woman.” (On the Live 1966 record, which is the best rock ‘n’ roll concert ever recorded, does anyone ever play the first disc, when songs on the second, like “Tell Me Momma, “Ballad of a Thin Man” and “Baby, Let Me Follow You Down” crackle with tension?

It’s the ’71 rendition of “Love Minus Zero/No Limit” that really shines, again with a modified twang, but emotional too—his voice almost (almost!) cracks during the last verse singing “the country doctor rambles” and “My love she’s like some raven/at the window with a broken wing.”

I’m not one of those Dylan fans who stupidly say, “Wouldn’t it have been better if Dylan died/pulled a Garbo” after his motorcycle accident, but do believe that Blood on the Tracks was his last great record. I saw Dylan in ’78 and it was a Vegas-inspired letdown; and a few years ago took my sons to a show in D.C., which was simply terrible. That’s neither here nor there: I’m just remembering Dylan’s star turn from 1971.