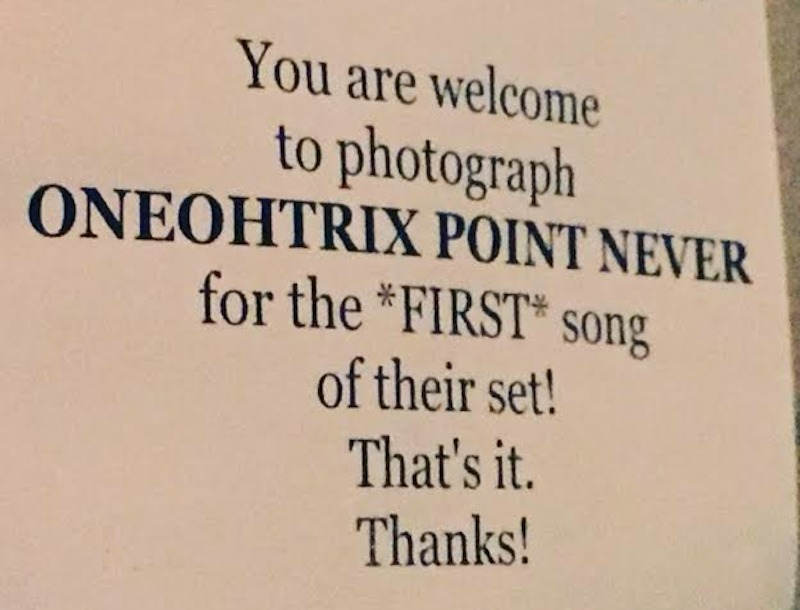 In an interview with Rolling Stone last year, Daniel Lopatin—aka Oneohtrix Point Never—explained his current fascination with the trappings of classic rock and his desire to make the MTV Unplugged version of an OPN record: “Well, just that they're fully contained ideas that, for better or worse, never deviate from what they are… Rock is one-point perspective music. It's like a Stanley Kubrick shot or something. Here's the monolith, here's everything around it and we want to you think about this one really black-and-white thing and make your choice. Are you with us or against us? There's something unfuckwithable about that. That anthemic approach to life, where, as naive as it is, it just kind of decides to be something. So I was like, well, how did I get so far away from that train of thought?”

Garden of Delete is the first record by Lopatin where I appreciated the concept more than the music—Replica and R Plus Seven were intellectually and formally exciting, but more importantly, it was all beautiful music, moving and melancholic in inexplicable ways. Though he was lucky never to get lumped into the “chillwave” fad, Lopatin’s music captured the feeling that all of those awful bands and digital dilettantes were chasing: memories of what never was, pieces of the past rearranged into something deeply disturbing and oddly familiar. Something like the video for “Problem Areas” from R Plus Seven is miles away from “Remember Rugrats?” garbage nostalgia of the early 2010’s. Lopatin ran laps around his contemporaries, managing to be serious, thought-provoking, hilarious, and sublime without any seams showing.

Since Garden of Delete came out in November, I’ve had a tough time warming up to it. The record is relentlessly harsh and sludgy—ugly, gray, Monster Energy Drink style sounds. The conceptual accouterment about a kid named Ezra and his obsession with a defunct cybergrunge band called Kaoss Edge seemed pretty neat in the rollout, but it doesn’t make the music any more enjoyable or enticing. It’s just not the record I want right now—but there are plenty of people that have been waiting for years for Lopatin to go Slipknot, judging by the enthusiastic crowd at the Ottobar the other night. When the show was announced last year, I was a bit puzzled—shouldn’t OPN be playing the Floristree, or skip Baltimore altogether for the 9:30 Club in D.C.? I thought that perhaps this was all part of the rock band concept, summoning up as many clichés as possible for the presentation of Garden of Delete. Sure enough, the doors opened an hour and a half late, Guns N’ Roses style, and there were signs posted everywhere that read: “PHOTOGRAPHERS: You are welcome to photograph ONEOHTRIX POINT NEVER for the *FIRST* song of their set. That's it. Thanks!” The Ottobar is a club that keeps the lights on with shows by a whole constellation of punk and metal bands, and it’s probably the most appropriate place in Baltimore to put on this very formal and heady rock band concept on.

Although I was optimistic earlier in the day upon revisiting Garden of Delete, the live show was ultimately even more monochromatic and tonally bland than the record. The bass was unrelenting and made us all very sleepy once the show was over—we barely made it home! Lopatin and his touring partner Nate Boyce (shredding a guitar synth all night) were engaged but not aggressive or energetic—as much as hints of the headiness of the project were presented and duly noted, the seams were showing, and three songs in, I totally zoned out, preoccupied with laundry and stuff I had to do later in the week. It was a drag. Last time I saw OPN was at Whartscape in July 2010. Lopatin played last on the last night of the last Whartscape, and it was a beautiful, dream-like ending to something so important and unique. He played songs from Returnal to a half-empty and hot Floristree, sweat dripping onto his synths and loop pedals, utilizing the same tools as all those other Neon Indian assholes but managing to elevate it and make it his own. Still, the records that would follow upped the ante tremendously, and I wish I was able to see him on the Replica and R Plus Seven tours. Don’t worry: the wave hasn’t crested, he’ll be back in 2017 with another amazing set of songs that sound nothing like anything he’s done before while still being distinctly OPN. I just hope he lays off the Mountain Dew in the meantime.