Chill of an Early Fall is new again, and old. 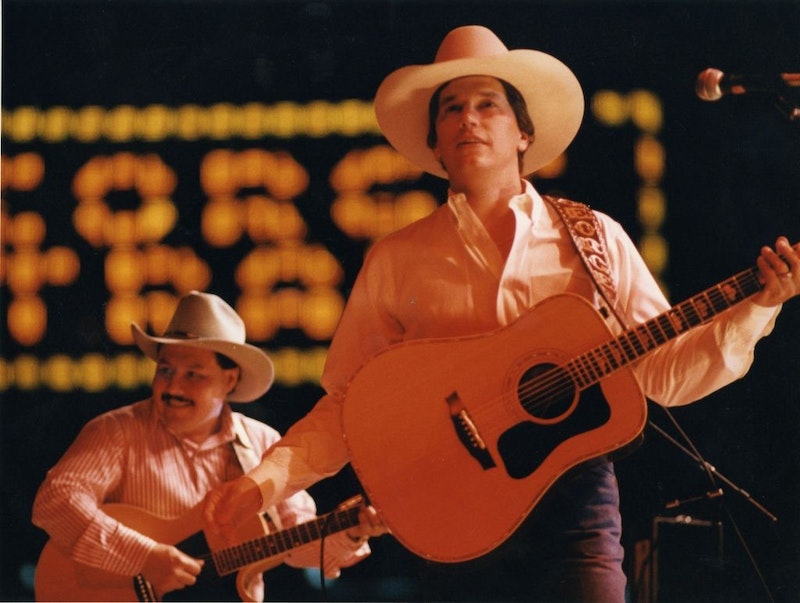 Country music is both obsessively nostalgic and obsessively amnesiac. It constantly references and pines for a lost, imagined rural past, while simultaneously turning its back on its own traditions in pursuit of the latest pop pleasure, whether it’s classic rock guitar lick or rap verse. The music exists in a perpetual blank, rootless bubble, a blue-jeaned yesternow.

It's no surprise, then, that the 25th anniversary of George Strait's 1991 Chill of an Early Fall hasn’t garnered huge publicity. The album was successful, charting two #1 singles. Strait himself remains a presence in country; his 2015 album hit the top of the chart. But a quarter century on, Chill of an Early Fall lacks the hipster cred to be considered a classic, and isn't relevant enough to what's on the radio at the moment to garner poptimist re-evaluations.

Too bad, because Chill of an Early Fall is a great album, that expertly blends country's impulse to authenticity and its impulse to sell out. The album is split between sincere retro appreciations of country past and slick, radio-ready pop ballads. The authentic tracks are a trio of country standards featuring The Ace in the Hole Band doing their best jazzy Bob Wills impersonation. Strait swings with easy good humor on "Home in San Antone," yodels with panache on "Lovesick Blues," and mines "Milk Cow Blues" for its every filthy double-entendre drop. Hundreds of country singers have declared, "I ain't had no milk and butter since that cow's been gone," but few have sounded as downright lusty about it as Strait manages to. "Her Only Bad Habit Is Me" isn't with the Ace in the Hole guys, but it's in a similar spirit—a honky-tonk shuffle with clever novelty lyrics—"why she loves me/I don't know," Strait emotes with a mournful glottal gulp as the piano tinkles in the background.

The rest of the album is devoted to the slick weepers, which sound both dated and oddly current. Strait's slow songs are very 1980s—but there's also a timelessness to schmaltz. "If I Know Me" seems mathematically designed for couples slow dance—the break-up, the reconciliation, the earnest drum machine for the big moment.

The title track also has the drum machine, or possibly someone thumping along who might as well be a drum machine. But the plodding pace and the cold, gloppy background fits the song's themes nicely, as Strait sees the damp, ominous signs of his relationship's dissolution and his own upcoming descent into alcohol-soaked self-pity. It's less like a George Jones song than like a pale foreshadowing of a George Jones song, or a broken simulacra of one. "Well her old friend, from her old end of town, dropped by today/and way down deep inside me something died," Strait sings, slow enough that it sounds like he is in fact running down, with time leaking out of him.

I love both the Western Swing and (some of) the slick pop, but the best song on the album is the one that winkingly comments on both. "You Know Me Better Than That" is an up-tempo, shoulder-shrugging goof, addressed to the narrator's ex. It starts as a boast about how wonderful the new girl thinks he is, but quickly turns into self-effacement. "You know me better than that," he sings with that broken, Hank Williams half yodel. "You know the me that gets lazy and fat… she tells her friends I'm perfect and that I love her cat/but you know me better than that."

The aw-shucks-I'm-just-a-backwoods-boy is one of country's most enduring tropes. What's great about "You Know Me Better Than That," though, is that Strait isn't failing at leaving his roots behind—he's succeeding. Yes, the song is about his discomfort with his pretense of liking ballet and Symphony Hall, but the discomfort is because the pretense is working so well. He's drawn back, maybe, but uptown beckons too, with all its orchestras and drum machines. When you look back at Chill of an Early Fall, you see Strait looking forward towards the next change of season, when he'll be the beloved past that's forgotten.