The foggy nostalgia of Tim McGraw. 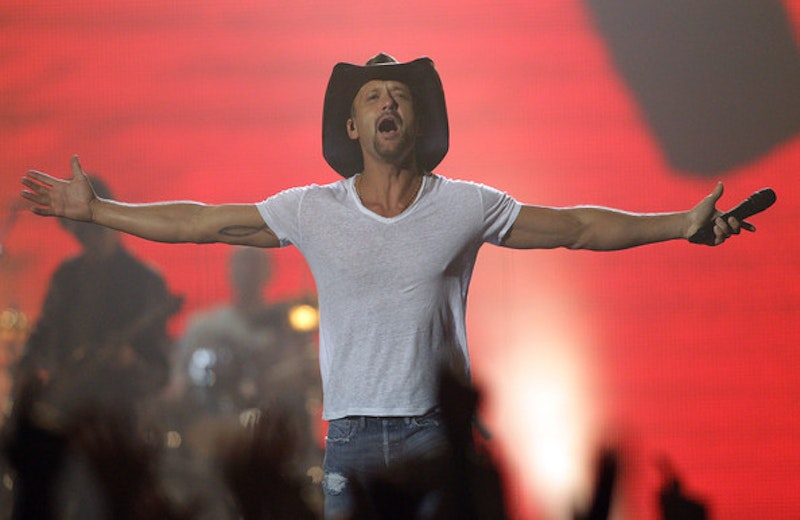 Tim McGraw's Emotional Traffic starts out with a 90s emo whine. "I crawl out of my cradle down into my black hole/and you just lay low/under your halo," McGraw wails, pulling out the words with a little nasal catch like he thinks he's Billy Corgan (there's even a line in there about how he's "silent in his cage"). The music is frat arena rock for sensitive new age post-grunge dipshits, the drums thumping along oh-so-earnestly as the guitars express sweeping self-pity through the portentous power of loud, muddy noodling. If Kurt Cobain were alive to hear this, he'd probably shoot himself.

Not every song is that dreadful. "One Part Two Part" is a bouncy 80s rocker that I’d probably really like if it were sung by Bonnie Raitt, but even McGraw's testostero-anonymous vocals don't ruin it entirely. "Felt Good on My Lips" does the 90s post-grunge thing the way it should be done if it has to be; the slightly distorted chimey guitar intro is so generically perfect it's impossible to link to a single source, which doesn't stop it from being impossible to get out of your head. The horny party-boy lyrics are irritating, but they could be worse, I suppose. Rhyming "last call" and "lip gloss" isn't exactly genius, but it's marginally clever. Credit where it's due.

McGraw though, and country radio in general, is a puzzle. Even factoring in the bland Ne-Yo duet, he's certainly not trying to be up to the minute when the bulk of the album sounds like it could have been recorded two decades ago. But Emotional Traffic doesn't make sense as a retro exercise either. McGraw isn't trying to remind you of the Smashing Pumpkins or Nirvana or Bonnie Raitt the way Joss Stone wants you to think of 60s and 70s soul.

McGraw's a country musician, and he does make occasional vague efforts to remind us of that. "Better Than I Used To Be" is a relatively stripped down maudlin ballad with lots of pedal steel that I can imagine George Strait singing. "Touchdown Jesus" is not, alas, a song about Jesus playing football, but its self-righteous litany of feel-good chicken-soup-for-the-soul parables punctuated by the banally triumphant title phrase is obviously a desperate bid for middle-American Christian cred.
But if you're going for middle-American Christian cred, why on earth are your musical touchstones generic 80s and 90s pop rock? Betty Wright as an icon of authenticity, okay. George Strait? Sure, if that's where you're at. But the Foo Fighters? What the hell?

You could argue that this sort of confusion has always been at the root of country music. In his book Creating Country Music: Fabricating Authenticity, Richard Peterson argued that country as a genre was an essentially dialectical process, as old time hard core authenticity claims vied with new soft shell pop instincts.  Thus, you get Hank Williams, wearing a cowboy hat while playing new pop songs in a string band setting with vaguely rural themes, or Bob Wills, playing jazz and folk and blues and pop in a big band setting with some country instrumentation added.

In that context, maybe it makes sense that country is now just 20-year-old pop music sung by someone with a mild country accent who makes occasional references to Jesus. Presumably listeners like hearing the same music that was on the radio when they were kids coupled with very mild evocations of the rural working-class setting in which that music was heard (or in which one enjoys imagining that it was heard, as the case may be). When McGraw declares on "Die By My Own Hand," the album's final song, that "It looks like you've left me with some habits I can't break," he could be talking about Emotional Traffic itself. The album feels like a tic, repeated not out of conviction, but simply because it's trying not to think too hard about whatever it is it once loved.