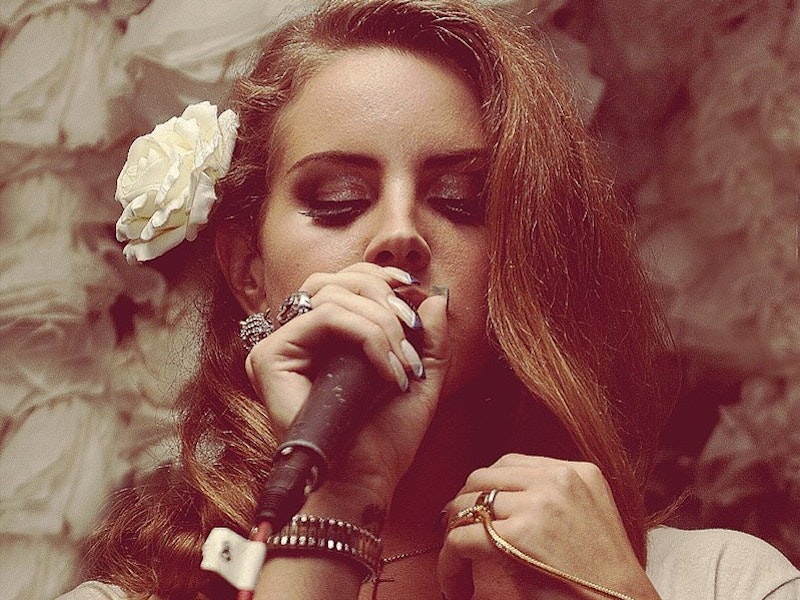 If Wikipedia is to be believed, Casey Anthony spends her days living in an undisclosed location, taking online courses in the pursuit of an undergraduate degree. Out on conditional bail and attended by assistants, a secluded Julian Assange prevails. Michael Vick makes a point of hiding in plain sight, a feat made easier by frequent injuries and short memories.

Right now, somewhere in Manhattan, Lana Del Rey is in the back seat of a limo, plotting an escape of her own; if anyone in the public eye is reviled more than Anthony, Assange, and Vick were at the heights of their infamy, it’s the singer-songwriter born Elizabeth Woolridge Grant, largely because the indigent, indignant, and indier-than-thou lacked a more convenient winter-solstice punching bag.

You have to feel for Grant, or Del Rey, or whoever—by all (media) accounts, sure, a Teflon ingénue for whom feckless comparisons to Lizzie Borden are likely just, by now, a part of daily life—and yet, right? Because, well, the pressure: endless touring regimens, countless interviews, the drag of room-service cuisine, pervy fans asking for autographs on their Whit Stillman DVDs and Vampire Weekend LPs, plants exploding glitter-bombs spiked with goat semen. Madness. Enough of this and drugs will find and consume her all over again.

How can Lana Del Rey get out of what she’s into?

Yeah, she could model, sure. Maybe not Vera Wang or Todd Oldham collections, but there’s always American Apparel.

Her management is probably already planning for this.

If nothing else, Del Rey gives good fetishized Polaroid, evincing a sort of kept ice-queen chic that’s catnip for the adolescent and post-adolescent males who queue up for indie-rock product. Splashing her blemish-free visage on singles and albums from here to Vancouver makes sense, because ironically, hers are the kind of come-hither looks most Del Rey detractors have already forgotten; there’s something generic about them, something vague.

Any of these, possibly, but that’s all kind of boring, isn’t it?

For some clandestine U.S. government agency or other, using her performing persona as the ultimate cover, trading wits with separatist concierges, rappelling down drainpipes in fuck-me heels.

There’s the question of acting, of course—but there’s acting, and there’s acting, and on some level it doesn’t matter which level Lana Del Rey operates at. It’s fun to imagine her parlaying the present disdain into a series of middle-ground cameos, roles where she plays some doomed secondary character’s mute moll, escort, or muse, gliding across sets in billowing white cotton dresses, scenery with a pulse. There’s no Dream Girls in her future, though I can imagine a 007 cameo appearance. And somewhere, the next James O. Incandenza or Andy Warhol is pining for his perfect cinematic subject, and lo, there she is, blowing up Sasha Frere-Jones’ Twitter feed, gazing emptily up and out, through all of us.