Here I Am And Nobody Cares

Kelly Rowland, the former Destiny's Child singer, takes a step backward with the anemic Here I Am. 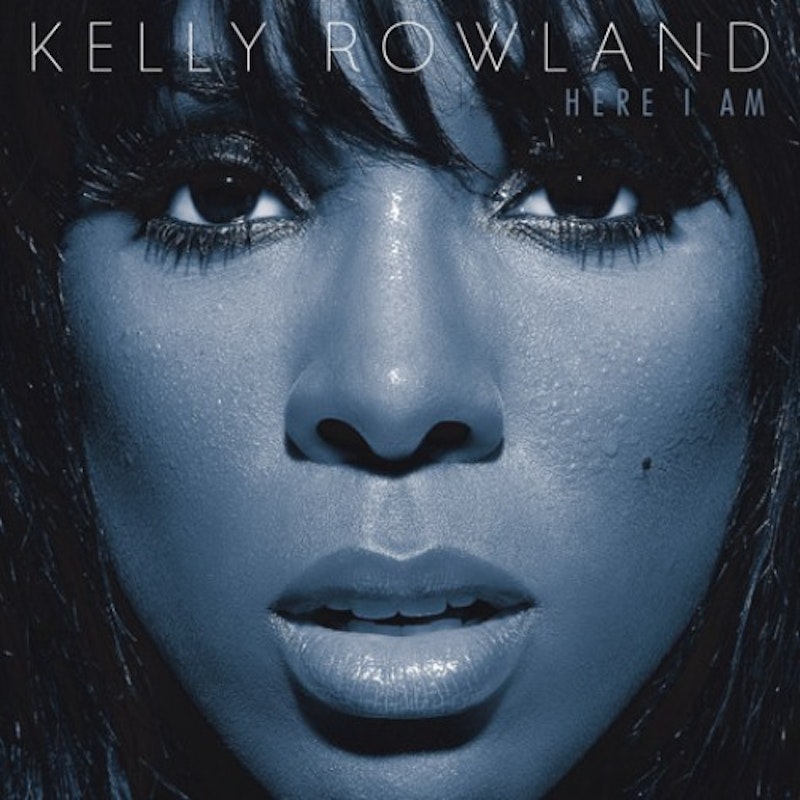 The cover of Destiny’s Child’s 1999 mega-smash Writing’s on the Wall shows three blindingly hot women swathed in clingy white diaphanous nothings—and, Kelly Rowland. Beyonce, LaTavia, and LeToya look like they’re ready, waiting, and eager for superstardom; like they’ve spent their whole lives preparing for the moment when they could bare their shoulders and be showered with adulation and cash. Rowland, on the other hand, has a deer-in-the-headlights stare.  You can almost see the cartoon thought bubble above her head, “Are we done yet? Can I put on some clothes now?”

It’s not that Rowland is particularly unattractive for a civilian. But standing next to Beyoncé Knowles, one of the more heart-stoppingly beautiful women on the planet, she does end up looking a little horse-faced—like the sit-com best-friend, carefully chosen not to upstage the star. Rowland, who lived with the Knowles’ from the time she was 14, solidified her stand-by-your-BFF cred when she remained with Beyoncé during LeToya and LaTavia’s acrimonious split from the band. On subsequent albums, Rowland did her usual thing, flanking Beyoncé and new bandmate Michelle Williams, looking hot but not too hot. A notable exception is DC’s 2001 Christian album, where the trio all wear something approaching street clothes and Rowland actually seems… comfortable.

Destiny’s Child is long gone, and Rowland has invested in breast implants—but whether she’s an A or a B-cup, in a band or out, she’s still a second stringer. Her only big hit without Beyoncé, 2002’s “Dilemma,” wasn’t a solo success, but a collaboration with Nelly. Her post-DC solo album, Ms. Kelly,  didn’t do squat in terms of sales, though it was surprisingly strong musically. Its first track, “Like This,” featured Rowland’s thick Houston accent wrapping itself around a sparse head-nodding hook. The song had character and made you remember why you always liked that best friend on the sitcom better than the boring lead.

The same cannot be said for Rowland’s latest album. In some ways, this is the logical culmination of her career—a work devoid of ambition or vision, designed to underwhelm on every level. The title, Here I Am, seems to have been chosen specifically for purposes of self-refutation. The opening song, “I’m Dat Chick,” is resolutely anonymous. Rowland’s accent is obliterated in an onslaught of autotune, and Tricky Stewart provides a bland anthemic backing.

That’s how it goes throughout. Ke$ha uses autotune to give her castrating party girl persona a snotty adenoidal edge; Britney uses autotune to turn herself into a robot. Rowland, though, just uses it to rub off the edges of her personality, like she’s afraid you’ll notice that she’s singing without a real frontwoman. The obligatory guest appearances by various rappers just drive the point home more painfully. Rowland’s pro forma cooing on “Motivation” sounds lame on its own… but when you put it next to Lil Wayne’s languidly, goofily lascivious rap (“I put her on the plate/and then I do the dishes”), the putative star’s lack of star power becomes actively embarrassing.

It’s a well-known truth that pop success is far more about marketing than musical talent or genius. Lady Gaga isn’t an especially gifted musician, and she doesn’t even look like the typical pop star sex bomb—but despite all that she has charisma out the meat dress. Rowland, on the other hand, has neither sex appeal nor marketing smarts. She poses topless on Vibe, and the media reacts as if a bra fell in the forest and there was no one around to hear.

The sad thing about this is that with Destiny’s Child and even on her own, Rowland has been involved in making a fair amount of great music. Ms. Kelly is arguably better than any of Beyonce’s solo albums, and the harmonies of Beyonce and Kelly together with their bandmates are some of the most heavenly musical sounds of the early 2000s. On Here I Am, though, Rowland is swallowed by her own lack of wattage, trying so hard to be a diva with charisma that she sounds like any random diva, minus the charisma. It’s a reminder, maybe, of the many ways in which pop stars find themselves constrained. Everyone knows that you only get an audience if you make a certain kind of music and have a certain kind of image. But Rowland’s career suggests, too, that failing to sell your image can in certain circumstances, not only reduce your audience, but can also end up gutting your music.