Earl Sweatshirt Couldn't Care Less About How You Feel

A review of I Don't Like Shit, I Don't Go Outside (Columbia/Tan Cressida). 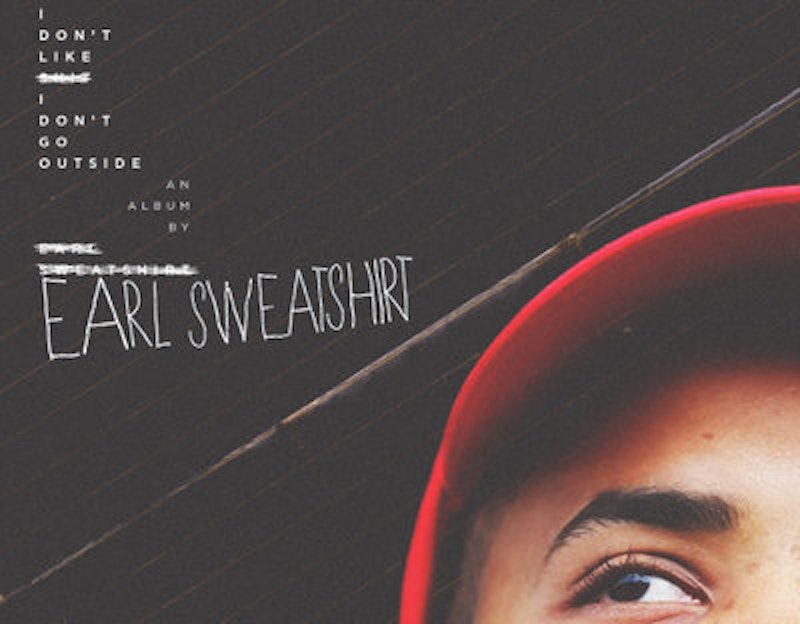 Maybe you found Earl Sweatshirt’s 2013 major-label debut, Doris, a touch too abrupt, disconsolate, and insular. Perhaps you laughed it off, like “next time out, there’ll be hooks and party songs”; surely, pop Earl was imminent. Well, wrong. Pop Earl is nowhere in evidence on I Don’t Like Shit, I Don’t Go Inside. There are fewer hooks here, fewer guest stars, fewer outside producers. Overall, in easily quantifiable terms, there’s just less: the 10 songs clock in at almost 30 minutes, which makes Doris’ 15-track, 45-minute span seem extravagant in comparison. All that, and I Don’t Like Shit… is notably less carefree. For all the pathos on offer, the digital-thriller movie poster cover art may as well feature the rapper born Thebe Kgositsile donning a miner’s helmet, peering warily from a cavern.

Though Kgositsile turned 21 this past February, he’s experienced an especially tumultuous adolescence: coming up as part of upstart rap collective Odd Future as a teen, being packed off to Samoa with his at-her-wits-end mother, returning to the States, and trying to navigate a Second Act in American Life that he isn’t sure he even really wants. If Doris was Earl considering these issues alone before a mirror, I Don’t Like Shit… is serious therapist’s couch spelunking. Turns out that hip-hop semi-stardom isn’t necessarily as advertised: it’s groupies taking advantage as you take advantage of them, everyone you meet ask favors (“you can talk to Clancy/you need a feature or quote from me”), you toast your friends but your friends are bullshit, there’s a constantly buzzing smartphone but no time to overcome the kind of hang-ups we all struggle with.

Lead single “Grief,” a warped emotional amalgamation of Prodigy’s “Mac 10 Handle” and Drake’s myriad raps about holing up inside to cut records, best encapsulates the tense mood of this album. Earl’s self-production is gothic and chilly, a clanky industrial drone as knotted as his brambling rhyme schemes: “Lately I’ve been panicking a lot/Feeling like I’m stranded in a mob/Scrambling for Xanax out the canister to pop/Never getting out of hand.” This fear of losing control pervades every moment, even on a song packed with veiled barbs at Odd Future homies and joyless, carnal asides. “Off Top” ejaculates minor-key piano, sampled voice snippets, and batteries of close-knit percussion, then leads off curt: “How you doin’, but what’s your motive, ho?” “Inside” gleams and glows like proto-R&B, surprisingly vulnerable—but it’s sneaky, insinuating; before your ears, Earl’s looser, conversational cadence—like he’s trying to chat us up, let us in, and switches in mid-stride, coarsening.

There are other voices on I Don’t Like Shit… (all of whom blend in nicely) but this is very clearly Earl’s show. On first listen, there doesn’t seem to be there there; only with time and patience is it possible to unpack and digest the all the internal rhymes, self-contradictions, and landmines embedded. There’s an artistry to this ugliness; depression, blunts, and white wine have hardly dulled his ability to turn a vivid phrase without quite reverting to the full gross-out misogyny he cut his teeth on. A funny thing happened to me. I spent the first handful of listens supremely worried about Earl, the way I would worry about an at-risk son or nephew—will his demons ultimately consume him before he has a chance to figure out who he is?—until I recognized that the exquisite care poured into these songs into these songs demonstrates that, sooner or later, he’ll emerge from the darkness he’s lost in now, stronger.