Whipping It Fast and Loud

Baltimore’s Sherman Whips go up, up and away! 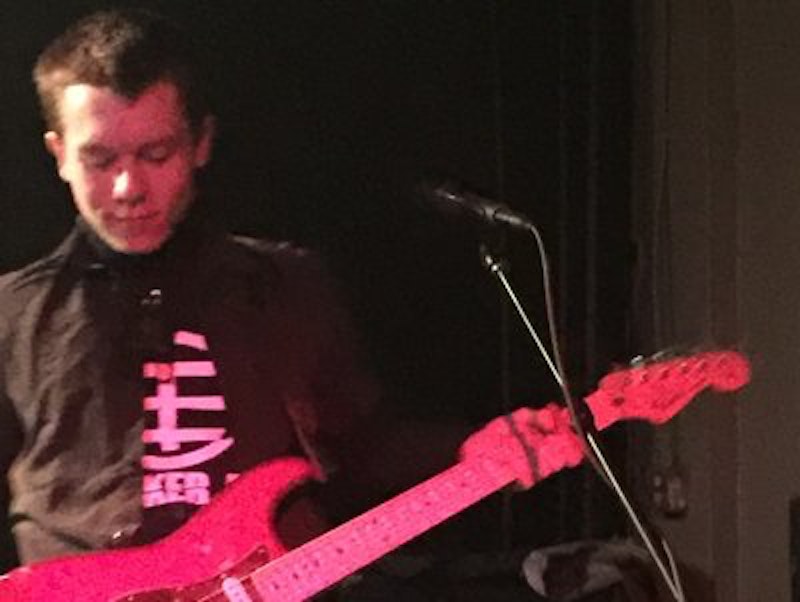 Booker and I walked up the stairs to Hour Haus on North Ave. to see Sherman Whips, the band my older son Nicky plays in—this show was one of many on the roster of Baltimore’s Future Fest last weekend—and the amiable gatekeeper immediately said, “You must be the dad, right?” I nodded, and he waved us inside, giving us trippy-colored wristbands to wear. There was some sort of fog/smoke machine chugging along, a slinky tape playing songs that reminded me of vintage Earth, Wind & Fire, and as Sherman Whips—Nick Hoegberg, Josh Dean, Timmy Judge and Nicky—were setting up, fiddling with buttons and knobs and amps and microphones, tuning guitars, all of which was beyond my ken, I surveyed the diverse crowd. Aside from the piercings, dreadlocks and no-smoking rule, it could’ve been the late-1970s/early-80s at the sublimely dumpy Marble Bar, where I’d often go, still south of 27, to see local bands like the Loose Shoes Rhythm Band, Judie’s Fixation, Thee Catatonic and The Reason, as well as not-yet-popular national acts like Talking Heads, Johnny Thunders and Eddie and the Hot Rods.

Where Nicky gets his musical talent—he’s a self-taught guitarist, eschewing the offer of lessons my wife and I suggested—is beyond me, for it runs thin in the family, although my nephews Quinn and Rhys are also quite accomplished. I remember seeing Nicky and his buddy Jake Lingan, a two-man group called Engine, playing the Ottobar when still in their mid-teens, and it floored me, with a crowd cheering and yelling for more, as I wondered how in the world I’d be able to get him up for school the next day. Nicky’s played in other groups, performed solo, and toured across the country, but Sherman Whips is the snazziest outfit he’s been affiliated with, a loud, exuberant quartet that plays a lot of fast songs, of which my favorites are “Unhealthy,” “Cookie Fists” and “Ansaphone Message.”

It’d be a fib to say I could make out the lyrics, which kind of bugs me, but the mere sound is cool to my ears. Booker said his brother’s band is reminiscent of Ween (which Nicky found plausible), while Sherman Whips reminds me of Stiff Little Fingers, the Belfast punk band from over a generation ago that released the anthem “Alternative Ulster” a long time ago. Maybe it was just because hours earlier we’d seen the terrific film ’71, a brutal exploration of the constant, and deadly, battles between the IRA and British army. When I told Nicky this, he asked who exactly Stiff Little Fingers were, and I’d be surprised if his bandmates were familiar with the group, so maybe it’s my imagination working overtime, but that’s hardly the point. Like many men and women nearing 60, today’s music (excepting hip-hop) often sounds derivative of the great groups of our time; just as the Stones, Yardbirds, Clash and Dylan borrowed heavily from the songs they grew up listening to on transistor radios.

Although I’ve listened to Sherman Whips videos, this was the first time I’d seen them live. It was a 7:30 show—a hard 7:30 Nicky reminded me by text, perhaps forgetting my punctuality—which was perfect, since they usually go on at 10, 11, even midnight, and though I’m still up at those hours, it’s tune-down time, and I’m either watching a ballgame or DVD, in the comfort of our sun room. Laugh if you will, but this (involuntary) AARP member doesn’t quite cut a rug like he once did.

It’s difficult to pass a day in this regrettable modern media era without seeing an article about helicopter parents who are living through their children, whether it’s on playing fields, college classes or rock ‘n’ roll shows. Sorry, that ain’t me. Though I’ve always loved music, I haven’t a lick of talent, much as I wish I did as a teenager. Even my air-guitar sucked. There was one summer afternoon in 1970 when I was hanging out with my friends Mike Bifulco, Scott Savitt and Andy Stone, and we entertained the idea of starting a jug band. That daft, but exciting, notion lasted about as long as the jug of cheap red wine we were drinking, but it was a lot of fun to gab about. The Grateful Dead—this was before the noxious “Deadhead” cult took root—had just switched gears, taking a cue from Crosby, Stills & Nash, and released the mostly acoustic Workingman’s Dead, with the infectious “Uncle John’s Band” as the standout. It occurred to us, that afternoon shortly before starting 10th grade, that if the Dead could do it, why not us? Rather grandiose, when I think back on it, although Bifulco went on to become a serious guitarist and Savitt wailed as lead singer, and they still do.

In 1967, the Byrds hit the charts with “So You Want to Be a Rock ‘n’ Roll Star,” a two-minute attack on the music industry, which even at 12 struck me as disingenuous: after all, this great band was huge, made a lot of money, and sang about the girls tearing them apart. Not too shabby: I hope that scenario plays out for Sherman Whips.