A review of Aaron Dilloway’s The Gag File (Dais). 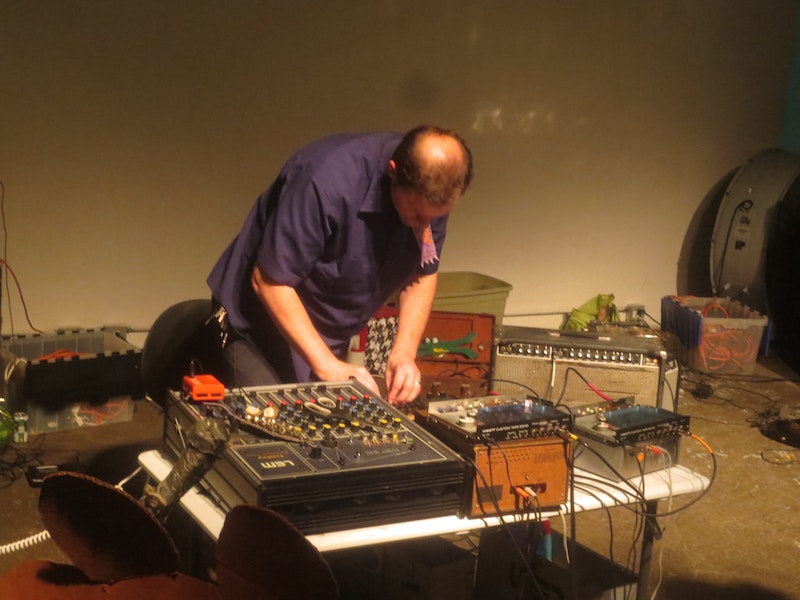 Oberlin, Ohio’s Aaron Dilloway has always been the type of musician who sneaks up on you: a magician, a trickster, a rogue. He positions listeners, compositionally, at odd, janky angles to studied, rough-hewn work that’s already left-of-center, disorientingly quicksand-like. His def(t)est sides—A Foxhole Point of View, Chain Shot, Lip Syncing To Verme—fastidiously loop, juice, and slant sonic hiccups and pinched texts until they resemble inter-dimensional sluices to nowhere.

A stronger argument for the notion of Dilloway-as-DJ, The Gag File places the bar higher because its pacing and textures suggest a journey, a narrative, an entertainment. The album opens sleepily with “Ghost” and “Karaoke With Cal, the former embedding demons into generative ambient washes, the latter smushing back-masked vocals into a warped scaffolding of piano and effects. “Inhuman Form Reflected,” a sector alarm-cum-primal vocal performance piece, vaporizes the uneasy serenity, and The Gag File finds its kicks in gearshifts that feel seamless even as they unlock weirder new windows. See “No Eye Sockets” transmitting from the world’s druggiest happy hour, how “Switch” mimics a hyperventilating Jack-in-the-Box, the way the infinite “Born in a Maze” strains to earn its title. There’s something knowing and pop lurking under all this lurch, something just out of reach. I’m looking forward to months and years of attempting to seize it.