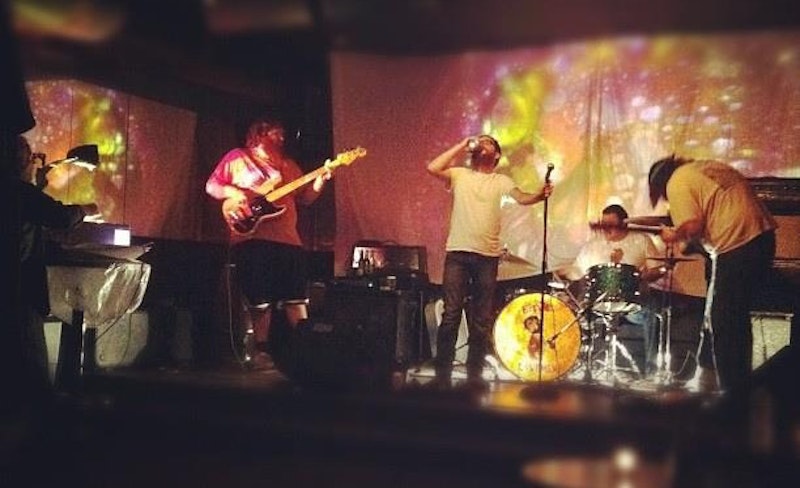 Stoner metal grunge brontosaurus crunch from Black Sabbath and the Stooges through Nirvana and Sleep was always kind of a primitive goof. You can't sound that elaborately lunk-headed without a bit of feral aforethought, and if there's no campy wink as you slog through the tar pit, that's only because the slogging and the tar pit are wink enough. What more do you need? As the thud and fuzz have dragged themselves further and further from radio play, it's become clearer that the mouth-breathing is a deliberate choice to dumb down and embrace the Neanderthal. So bang your head slowly—and if you giggle a bit amidst the uber-macho swagger, it's fine as long as you do it with feedback.

Bionic Cavemen's new album shows a topless cavewoman wielding an axe while riding a bison, all in retro-psychedelic style. That pretty much sums up the band, who come out of Chicago via San Francisco, Seattle, and the last Ice Age. Vocalist A. Morgen roars hoarse concussed blues like Muddy Waters trying to swallow Mudhoney while the rhythm section bashes along and guitarist R. Morgen drags through the mud, surfacing occasionally for a distorted classic rock guitar wank. "Black Diamond round neck/whatever helps keep you in check/Black Diamond in your heart/don't let it tear us apart," gives you a sense of the lyrics, which are of the "We need something to mumble-shout" variety. There's not much to choose between the songs, and the ambition is limited. Bionic Cavemen just want to rawk, thrust, and ride that bison till the ground cracks open. They succeed admirably.

Stoner rock isn’t noted for its rhythmic complexity; you hit the drums hard, take a minute and hit the drums hard again. Here Lies Man pushes that trudge out of the way and injects some lumbering funk roar. They claim the result is Black Sabbath meets Afrobeat, but it also has a sweaty fusion vibe—Herbie Hancock's "Watermelon Man" is jerking and vibing somewhere not too far in the background. Drummer Geoff Mann is the son of Herbie Mann, so the jazz influence—not to mention the world music inspiration—has been acquired honestly. As with Bionic Cavemen, individual songs aren't exactly the point—which is why the last track on the album is a 39-minute joke called "Here Lies Man Full Album," which reprises the entirety of what came before.

Still, if I had to pick a favorite track it would probably be "Letting Go," on which the beat ties itself around a positively cheesy hook as the singer declares, with laid back trippiness, that he's "Letting go of the human race/letting go into outer space. "It could be a disco hit for especially fleet-footed pachyderms.

As band names like Here Lies Man and Bionic Cavemen indicate, stoner rock is generally a genre for sweaty manly men with manly grunts, manly stench, and manly bits. That has not dissuaded The Great Sadness' frontwoman Cathy Cooper, though, whose guitar spits out spiky bursts of raunch aggro enough to startle a moose. Drummer Stephen McNeely keeps things heavy, but with a swing, while Cooper's voice wails and trembles like an unholy amalgamation of Buddy Holly and a witch. The album has a welcome goth rockabilly sensibility, greaser tough and mean. When Cooper kicks off "Desperate" with a slowed down distorted, "Bop, bop, bop, bop," it's ridiculous and frightening. There's some alternate universe in which this is what country radio sounds like.  As it is, you just have to imagine Cooper's Jello Biafra/Stevie Nicks quaver casually castrating some bro-country himbo. Stoner rock purists may find this just a little weird for their mellow, but I've been listening to it obsessively. It's one of the best releases of the year so far, bar genre.