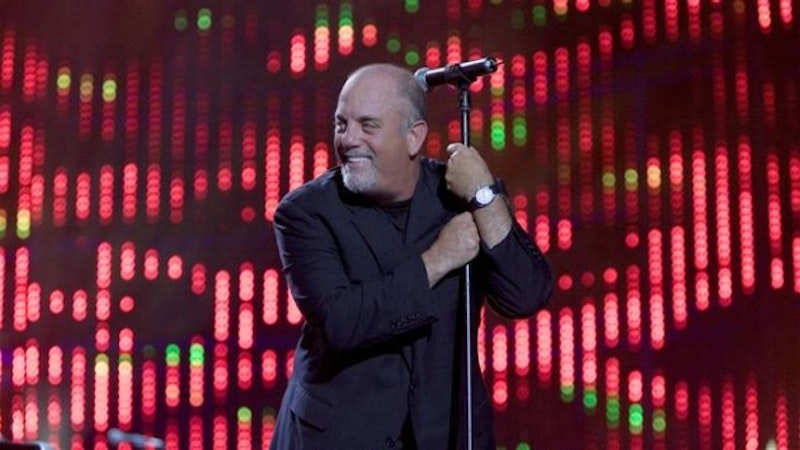 My most embarrassing aesthetic faux pas is probably Billy Joel. I adored him when I was a kid; had all the albums, just about memorized all the lyrics. I went to see him live for my first big stadium concert and felt moved when he let the crowd sing a verse of "Piano Man" for him. It was a song about how he'd once been a nobody who thought he’d be a somebody and now he was somebody; "American Idol" hadn't been invented, but Joel had already distilled self-reflective sentimental self-vaunting down to three minutes of maudlin triumphalism.

So yes, that was embarrassing for me. And embarrassing for Billy Joel as well. But I've gotten past it—and, somewhat surprisingly, Joel has too. He hasn't recorded an album of new material since 1993's River of Dreams, and at 65, he's not planning to release any more, ever, according to an interview in The New Yorker.

"Some people think it’s because I’m lazy or I’m just being contrary. But, no, I think it’s just—I’ve had my say. If I put out an album now, it would probably sell pretty well, because of who I am, but that’s no reason to do it. I’d want it to be good. And I’ve seen artists on that treadmill, putting out albums year after year, and the albums get worse and worse, less and less interesting, and it’s, like, maybe you should stop.”

As I argued recently, Joel could be describing the Rolling Stones, as a band that has been flat out awful for significantly longer than they were great. A band that has, in fact, been bad long enough that you start to wonder whether years and years of shittiness shouldn't at least in part qualify their claim to greatness.

Joel was never great to begin with. His self-absorption was in place from his first album Cold Spring Harbor in "I'm an artist, mythologize me," dreck like "Got to Begin Again" (cleverly placed as the last song on the album.) Still, and even despite the frequency-shifted technical atrocity on the vocals, the James Taylor-esque piano noodling and fey sincerity on something like "Falling of the Rain" comes across as merely run-of-the-mill bad hippie folk mush, not as good as Air Supply or America, but not enough to actually make you stab a pencil through your ear drums.

That was the high point though. Through the 1970s, he grew rapidly to occupy the shroud of his foretold awfulness, exploring different instrumental and stylistic ways to highlight his rock-bottom, endlessly reiterated self-regard. "The Entertainer" fro 1974’s Streelife Serenader was an early low, with a smarmy synth-line and surging rawk drums framing Joel's already familiar whining about being an itinerant famous-but-not-famous-enough troubadour. The banjo makes me want to throw up.

But even that wasn't as bad as it got. "Only the Good Die Young" from 1977 was arguably so-so, the pompous, utterly unconvincing swagger at least tied to a moderately peppy tune. But by the time we get into the 80s, we're descending into banal schmaltz like "This Is the Time," with Joel projecting histrionic bathos. At least Mariah or Celine or Steve Perry can sing; you can enjoy their prowess as they bellow. Not Joel.

It's charmless, incompetent, and slick all at once. "Let a day slip on by. ai ai" may be one of the most half-assed singing performances in all of popular music history.

And then there's the clueless get-off-my-lawn, dad-rock apology crap like "We Didn't Start the Fire" and "It's Still Rock and Roll to Me," and the miserable doo-wop confessional bilge of "Innocent Man" or, that nadir of nadir, "The River of Dreams." Every time you'd think he couldn't get any worse, he found new ways to combine laziness and lack of imagination with access to a studio to pump out another pallid pop atrocity. He's the Fifty Shades and John Grisham of music—except that everybody knows that Fifty Shades and John Grisham are awful, while Joel is in the Rock and Roll Hall of Fame.

But Joel appears to be smarter than his critics and his public. He may not realize how bad he's been, but he appears to have some vague, dark presentiment of how bad he might be. Part of being a decent artist is being a decent critic of your own work and impulses, and in this case, Joel's critical vision is sound. The world does not need to be stained with any more Joel product. The fact that Joel recognizes this doesn't make him a good artist. But maybe it makes him a slightly better one.