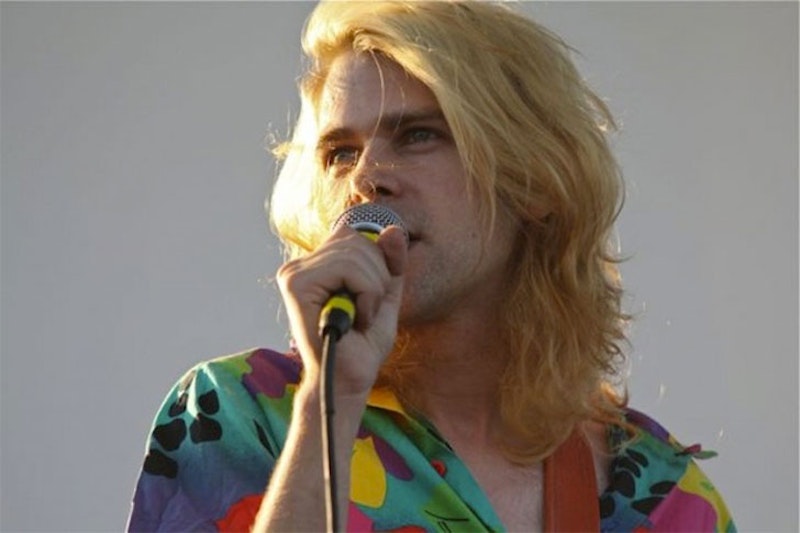 To promote his new “double-album magnum opus” pom pom, Ariel Pink is playing the heel and becoming the Ann Coulter of pop, issuing absurdist quotes such as, “I could be an asshole, and that’s my right. People need to get over that. It’s not illegal to be an asshole. It’s not illegal to be racist, even. It’s not illegal to do anything.” Pink successfully broadened his bubble and raised his profile significantly by falsely claiming he was contacted by Madonna’s people about contributing to her new album. Pink underhanded the non-existent offer by saying that Madonna’s “first record [1983’s Madonna] was so good because of the songs […] It’s been a downward slide [since] … ‘Ray of Light’ is not cool. And all the other stuff she’s done after that, it’s not like it matters. It really shows a drain of values. People need more substance in their mac-and-cheese. People need more sugar or something. […] They actually need songs. I’m partly responsible for that return-to-values thing.”

Grimes, either taking it at face value or playing into the pro-wrestling vibe of this whole thing, called Pink a delusional misogynist and that “Ray of Light is a masterpiece.” Cue thousands of people posting “FUCK ARIEL PINK” and “WHO IS ARIEL PINK” in the same stroke. Known for deliberately sabotaging his career (the Coachella 2011 incident, the glut of “beta-male” interviews around Mature Themes, the majority of his behavior during the lo-fi days, the notoriously awful and irredeemable live performances that have since improved dramatically), the lead-up to pom pom feels as ambitious, masterful, and deliriously stupid as the record itself.

There is a difference between Rush Limbaugh and Ann Coulter. Limbaugh has actual believers who hang on his bluster; Coulter’s always existed as a devil’s advocate media personality who sells a lot of books (and racks up fees for speeches) by saying absurdist, inflammatory things. I have my doubts that Coulter actually gives a shit about anything she talks about—Limbaugh is fully insane and evil, and has millions of listeners daily. And then there’s Fred Phelps, the thankfully late founder of the notorious Westboro Baptist Church, another organization that Pink touted as an example of American exceptionalism. The first quote up top is incredible and hilarious, especially the punchline, that “It’s not illegal to do anything.” This is straight up Coulter absurdity, as demonstrated in an old line of hers: “If only we could get Muslims to boycott all airlines, we could dispense with airport security altogether.”