Reverence, respect, and attention at a rare rock club performance by Liz Harris. 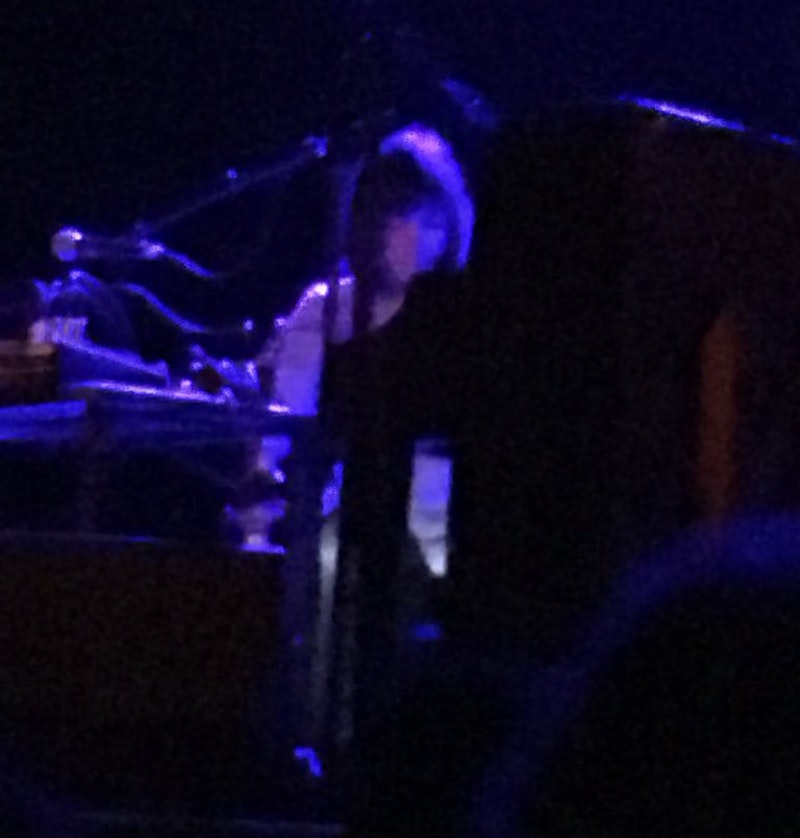 There are few contemporary artists who are given as much reverence as Liz Harris, aka Grouper, the name of the project she’s released music under since 2005. After breaking through to a national and eventually international audience with 2008’s Dragging a Dead Deer Up a Hill, and a subsequent tour opening for Animal Collective at the height of the hysteria over Merriweather Post Pavilion in the summer of 2009, Harris has been able to proceed and manage her career on her own terms. She rarely tours and when she does play live, it’s usually in churches, chapels, theaters, synagogues, or museums.

In an interview with Love Lion published a year ago today, Harris said, “I don’t like playing in classic club venues. It’s not about a pristine environment, crowd, place—noise can be a perfect murmur in the background almost like another layer of tape hiss. Somewhere with history, with windows, where one can hear the cars passing or a train roll by, with wide and reverberant acoustics, an audience who came to listen, conditions that allow the audience to listen comfortably, a graveyard, a chapel, a house or an art space, seems a kind of poetic residue that adds to this music.

“Once I started being invited to play such places it just felt hard and wrong for the music to go back to the black box, loud bar and fog machine. So as I began to feel more confident about making requests about shows I started asking to play in accessible venues without bars, without smoking, and with seating for the audience.”

Her latest album, Grid of Points, came out in April and now she’s on a miniature tour, with appearances at Raleigh’s Hopscotch Festival last week and a show tonight at the Murmrr Theatre in Brooklyn. I saw her two days ago at Union Transfer in Philadelphia, as much a traditional rock venue as the 9:30 Club or Baltimore Soundstage. She played in the main room (1200 capacity), it was entirely seated, and the bar was closed 15 minutes before she started playing.

You could hear a pin drop for the duration of her hour-long set, and it was the same for her excellent opener L’Rain. Union Transfer has a great sound system, but Harris still plays very quietly, further emphasizing the silence and the space between songs and transitions when she switched out the tapes on her table and prepared new loops. She’s touring with a piano for the first time, playing lots of new material and delving into her catalogue with songs like “Fishing Bird (Gutted Empty in the Evening Breeze,” “Alien Observer,” and “Labyrinth.”

Identifying songs is always guesswork with Harris’ live sets, as she interpolates defining loops and sounds from one song and uses them as the base layer for something else: halfway through her performance, the first sound from her 2007 album Cover the Windows and the Walls emerged, and I could’ve sworn the song she went into was “Cover the Windows and the Walls” but with completely different lyrics. Who knows. It doesn’t matter: Grouper music doesn’t lend itself to setlist statistics and these guessing games are at best a distraction from discussing the overall performance and presentation.

I can’t stress how impressive it was that Harris played as quietly as she did and maintained a holy atmosphere in a room full of hundreds and hundreds of young people that never talked and only rarely took out their phones to sneak a few pictures or videos. I could hear people crying five rows over, others with their eyes closed not asleep but in a trance, and everyone else sitting upright in those black folding chairs paying very close attention. It was amazing to see her sing and play guitar and piano so close and with such clarity in a room full of rapturous devotees. Her self-imposed isolation and high standards have paid off: a Grouper show is a serious affair, and people treat it as such. If she had kept up touring every year or even every other year after 2009, I doubt she’d be as popular, revered, or respected in a rock venue selling alcohol to hipsters as she is now.

I’ve written before about why I find Harris’ music to be so powerful, elusive, and moving, and how intimate and intense it can be while remaining intangible and just out of reach and hard to decipher. She derisively referred to her 2014 record Ruins as her “adult contemporary album” to friends because she felt embarrassed that the words were clear for once. There’s been very little promotion for these shows, and she hasn’t done any press since the release of Grid of Points nearly six months ago.

The mystery remains, and just like when I saw her in a chapel in Charlottesville three years ago, she had the coolest exit I’ve ever seen: after playing the final chords of “Labyrinth,” Harris prepared a field recording of a train passing by, the same sound at the end of Grid of Points. She stood up and let the loop’s volume bloom and eventually explode—until the sound suddenly cut off along with all of the lights in the venue simultaneously, and she left the stage in total darkness without a word.