Some of the 1970s hippie bands were serious students of the sub-genres of country and featured virtuoso players. 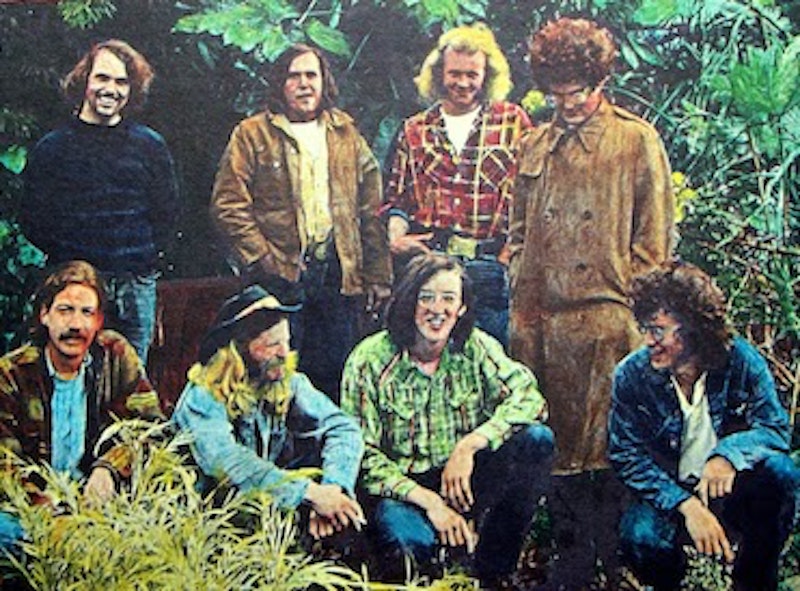 Country fans, even in the city, once debated the question of which song, among the plethora of plausible choices, was saddest. The matter was, allegedly, settled in 1980, when George Jones issued "He Stopped Loving Her Today." And yet all this time I've stuck with my original choice, the most traumatic expression of human despair accomplished during the 1970s, a golden country classic by Commander Cody and His Lost Planet Airmen. It seemed to me at the time that The Old Commander (or rather his vocalist, Billy C. Farlow) was telling my very life: "I saw your other man today, wearing my brand-new shoes. And I'm down to seeds and stems again, too."

You may not remember seeds and stems, as (I'm told) the world of cannabis consumption has changed. Now you're down to empty vape cartridges or something, which I'm sure is just as bad, if less hippie. And you may also fail to recall that a lot of hippies were growing and consuming their own country music. We certainly were in the DC metropolitan area, from which we were dipping south in our VW microbuses and bugs to bluegrass festivals. But hippies were at it in Georgia too, and in San Francisco and Los Angeles and Austin. Stoner country was fundamental in '72, and perhaps deserves a revival today, or at least a playlist.

We always thought of the Grateful Dead as basically a country band, and they thought of themselves that way too, at least intermittently. Jerry Garcia played banjo in the fine bluegrass band Old and in the Way (also featuring Dave Grisman, Vassar Clements, and Peter Rowan) and pedal steel in the paradigm stoner-country band New Riders of the Purple Sage. Bob Weir tried to head down a Marty Robbins western road with his band Kingfish. The Dead themselves sounded perfectly at home on Merle Haggard's "Mama Tried" and on traditional-sounding originals like "Dire Wolf."

The New Riders replaced Garcia with the great Buddy Cage, and throughout their relatively brief initial run were a straightforward stoner country act. In retrospect, they were a mixed bag on record, but if I had to pick an emblem it might be their showstopper "Panama Red" (he'll steal your woman, then he'll rob your head), though "Lonesome L.A. Cowboy" has also gained iconic status among stoner country's myriad aficionados.

Some of the hippie bands, however, were more serious students of the sub-genres of country and featured virtuoso players. Two of my favorite acts of that era (or any era, really)—the aforementioned Lost Planet Airmen and the WV/DC/TX/SF Asleep at the Wheel—played the living piss out of Bob Wills-style Western Swing and country boogie, while adapting the lyrics to a young, stoned, longhaired audience. This was an odd and excellent zone of the roots revival of that period, and the bands were archivists who killed onstage: a rare combination.

Asleep at the Wheel is still an Austin institution and the name has referred to many different lineups built around Ray Benson's voice and guitar over the decades. But if you ask me, the 1970s edition was the best. Benson later re-recorded a lot of the songs with a different band, but I'd still go to the original records for "Choo Choo Ch'boogie" or "The Letter that Johnny Walker Read." They were like a hip-hop collective, featuring the fine female vocalist Chris O'Connell, the pedal-steel player Lucky Oceans, and the pianist Floyd Domino, among others: a different feature on every song. I don't really know who among them was smoking what, but I fold them in because I was listening to them always with Commander Cody as Western Swing revivalists, and because odoriferous clouds rose above their excellent shows in that period.

On the other hand, I do have a notion about the smoking habits and the Lost Planet Airmen, because they sang about them all the time. They even had a #1 pop hit with "Hot Rod Lincoln," which was a good showcase for the instrumentalists. At different times they featured the great young fiddle player Andy Stein and the great old fiddle player Johnny Gimble, who’d played with Bob Wills. And they spent a lot of time exploring different corners of the American songbook, throwing out masterpiece versions of "Minnie the Moocher" and "The Shadow Knows" and floating from Cajun to hard-ass honky-tonk to weepers, including the saddest song ever recorded.

If "Panama Red" gives the vibe, Cody's "Everybody's Doin' It" summarizes the ethic. Obviously, you weren't going to get "everybody's dancin' and truckin'; everybody's swingin' and fuckin'" onto the country charts of 1975, when B.J. Thomas ruled the roost. But there was always another country audience out there. For a while, with the Byrds and Gram Parsons, the Nitty Gritty Dirt Band, or slices of The Band and Allman Brothers, country music in one form or another seemed central to those of us who did indeed burn our draft cards down on Main Street and take our trips on LSD. And though that wasn't how Merle saw his audience, we were listening to him too, and so were the Dead.

Later in the 1970s my cohort of country boys from NW DC might well have been floating toward hard liquor and Skynyrd-style Southern Rock. The whole delightful thing was over well before 1990, by which time I’d evolved musically, emotionally, and with regard to hairstyle toward mullet country.

(1) Commander Cody and the Lost Planet Airmen, "(Down to) Seeds and Stems (Again)"

(12) Commander Cody and his Lost Planet Airmen, "Everybody's Doin' It"

(16) Asleep at the Wheel, Ain't Nobody Here But Us Chickens" (from Collision Course)

(18) Asleep at the Wheel, "The Letter that Johnny Walker Read" (from Texas Gold)

(20) Asleep at the Wheel, "Bump Bounce Boogie" (from Texas Gold)