The onetime chameleon emerges from his Garbo lair with The Next Day. 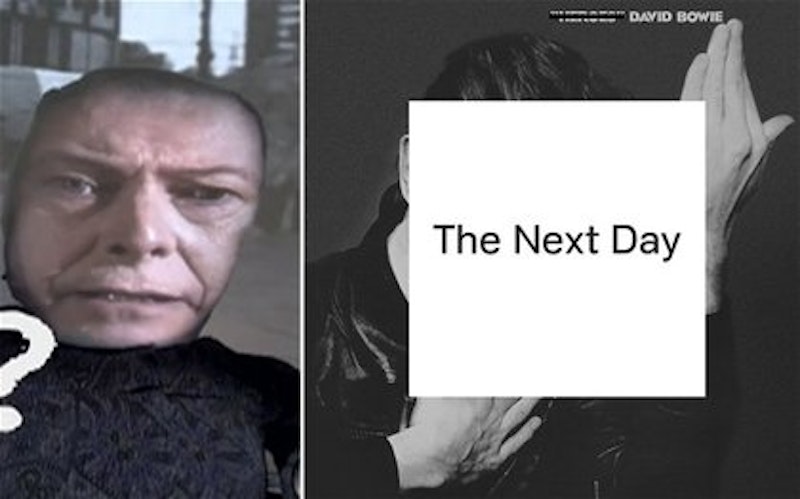 “David Bowie was doing well for a while there. He was graceful. The last thing he needed to do was make more records. He was marinating in his retirement. The world does not need music from a 66-year-old David Bowie.” Words spoken by someone who saw Bowie at his peak in the “Heroes” era in 1978, the only extensive tour he did for his brilliant and arguably most influential three albums of his career: the neon tangerine Low, the triumphant “Heroes,” and the weird and claustrophobic Lodger. Undoubtedly, when the man finally ascends to his eternal reward, the obit headlines will read: “ROCK STAR KNOWN AS ZIGGY STARDUST AND A GENDER BENDING KABUKI MINX, DEAD AT 102.” Just as Dylan’s will read “BOB DYLAN, VOICE OF A GENERATION, DIES, HIS ASHES BLOWIN’ IN THE WIND.”

There’s nothing either of them could do to fuck up their legacy this late, and why shouldn’t they pump out new records every few years? If I really like an artist, I want to hear all the detritus they create. Artifacts like the Miles Davis session reissues and exhaustive live bootleg collections are coveted by obsessives like me, but only the most ingrained and canonized artists get that sort of treatment. The Husker Du catalogue hasn’t even been remastered for CD.

So, more music from such a prolific, multi-dimensional, and fascinating artist should be embraced with open arms. If you don’t dig it, don’t listen; but a work like The Next Day, Bowie’s first in 10 years, is a document of what he’s been dwelling on lately: death, bodies, lives falling apart, settling into wearing cardigan sweaters, going to the grocery store (as he does in the video for his latest single, “The Stars (Are Out Tonight).” Bowie sits and nuzzles with his beautiful wife (played by Tilda Swinton with a very loud blonde bouffant), watching TV and savoring each other’s company. You feel the dread that an Amour situation could be only days, minutes, seconds away. The song itself sounds like modern rock wallpaper, and basically disposable—but it’s better than a reclusive retirement. “Where Are We Now?” on the other hand might be one of Bowie’s best songs ever—his voice is small, foggy, marble-mouthed during the verses, as he recites a handful of landmarks “just walking the dead.” His weathered, sad face is cast onto a small, grotesque puppet alongside an unknown woman. It’s a beautiful dirge, a cut that alone makes this album worth checking out. Honestly, it’s the only song I remembered after repeated listens.

Like a lot of old musicians, the stuff just gets boring. They’re drained of whatever mania made them so appealing in the first place; but that doesn’t mean they’re useless and should go away for posterity’s sake. Anybody who thinks Bowie or Dylan or Paul McCartney or Van Dyke Parks is a genius wants to seek out every piece of debris from these artists’ lives. No matter that I’ll probably listen to The Next Day way less than I ever played Limp Bizkit’s Significant Other, but more material, more ideas, more checking-ins from such a colossal artist, shouldn’t be scoffed at by anyone. I’m not giving the thing a sloppy hummer like Rolling Stone and all the other aging gray ponytail scrubs who miss James Taylor and the Eagles more than anything. The Next Day is unremarkable, but with a few exceptional cuts, it’s easy to say this rises above most every major label release so far this year.