Edge of Attack Will Eat Metal Past

And Metal Present will eat Edge of Attack. 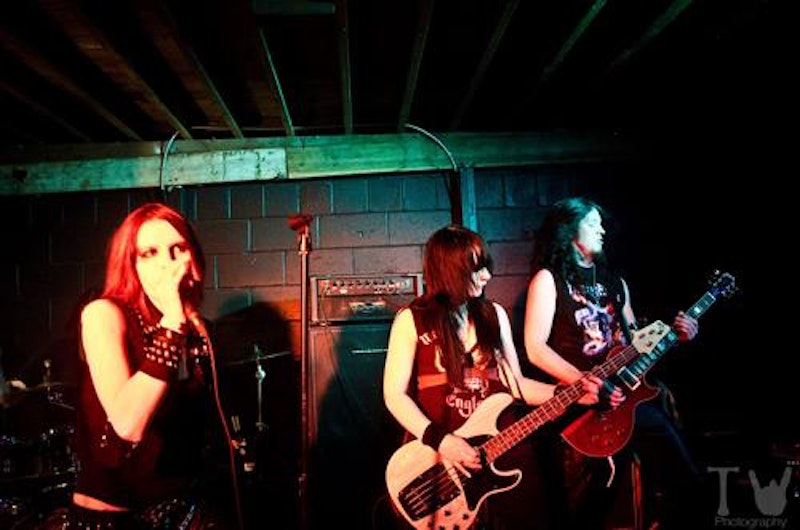 The new self-titled debut by Canadian band Edge of Attack is the kind of ridiculous, bloated atrocity that metal haters snicker at when they hear the word "metal." From the desperately garbled "toughness" of the name ("Edge of Attack"? What does that even mean? Are they having heart failure next to a ravine?) to the desperate "sex sells" promotional image (look! corsets! breasts!) to the grandiosity of their steroidal Renaissance Faire music, this is a shameless, not to mention clueless band. And I haven't even mentioned the lyrics!

Such as: "Sometimes you feel like you’re bound to give in/It pulls at your heart like a terror/The will to be strong send you further along/Battle the heart of the darkness/In hell."

Yes, it's a goth hallmark card. Battle the darkness, kids; there's nothing like the power of positive thinking about the Pit.

Nevertheless, I love it all. The tin-ear band name; the ridiculous corsets; the lumbering brontosaurus prog runs; and even those lyrics that sound like they were written by a high school Dungeon Master after being hit in the head by an errant 20-sided die. Singer Roxanne Gordy's high, preposterous declamations about darkness, endless pain, and searching for her soul to remain… they viscerally recall Robert Plant, Rob Halford or any of those other earnest metal shriekers so fierce and/or oblivious that they weren't afraid to sound like women (as opposed to Gordy, who is so fierce and/or oblivious that she isn't afraid to sound like her male predecessors.) The demi-classical, toweringly fussy, bombastic songwriting, complete with vocal arrangements, recalls great proto-Spinal Tap prog-metal dinosaurs like Rainbow and Uriah Heep.

In short, Edge of Attack isn't just a parody of metal. It's a throwback to when that parody took hold; to the time when "metal" was "heavy metal;" when it was gimmicky and trashy and garish enough to put butts in stadium seats; when the singers wore leather pants and leather outfits and pranced around like feral thespians belting out galumphing saurian show-tunes.

For the most part, metal bands don't really do that sort of thing anymore. Slayer and Metallica listened to punk; crazy Norwegians burned churches; Black Sabbath won out in the influence sweepstakes over Zeppelin; and "heavy" got replaced with "extreme," from doom or death or black. The result is that metal has undergone twisted, gargantuan recapitulation of the trajectory of jazz from earlier in the century. The music, which started as a kind of pop, has transformed into something considerably less accessible. In fact, metal is now art music. Bands like Khanate or Botanist or Deicide are focused on perfecting, or exploring, formal and conceptual obsessions for a selected audience of true believers. They don't care about selling gimmicks to the masses.

Usually, you expect music to move from subcultural authenticity to sold-out mass product. You don't expect it to go the other way. When it does, the results can be disorienting. In jazz, and perhaps bluegrass, the latter-day cachet has resulted in a retrospective amnesia. Jelly Roll Morton, Louis Armstrong and Bill Monroe are remembered primarily as geniuses true to their own art, which they certainly were. But they're not remembered as pop hucksters, which they were as well.

Metal, though, has moved away from pop without any attendant cultural validation. The difference between its pop past and its art present isn’t so much erased as simply ignored. Power metal, which is what Edge of Attack is, more or less, is just another subgenre. The fact that it's retro-pop makes it neither more authentic (because it's a retro) nor less authentic (because it's pop), because nobody who cares about those kinds of markers is paying attention anyway.

For the people who are paying attention, the only authenticity that matters is whether it's metal. Which it is—and not solely in a retro sense either. Edge of Attack is mostly influenced by 1970s and 80s bands like Rainbow. But drummer Trevor Swain has obviously listened to a lot of thrash and death. And guitarist Jurekk Whipple isn't afraid to throw in some growling, gargling up-to-date demon vocals on occasion as a contrast to Gordy's clearer old school efforts.

At first, I found the busy drumming an irritation, as a clumsy, ill-conceived weight dragging down the towering arrangements. But I've grown fond even of that clumsiness. The new and old bang up against each other awkwardly, so that the earnest up-to-date artiness seems like a gimmick, and the old-school stadium-pleasing trashiness seems like keeping it real. For Edge of Attack, authenticity and art and pop all get mashed together and then set aside in favor of Viking raids and death worship. Which is a big part of what I love about old metal, and new metal, and a lot of the metal in between.