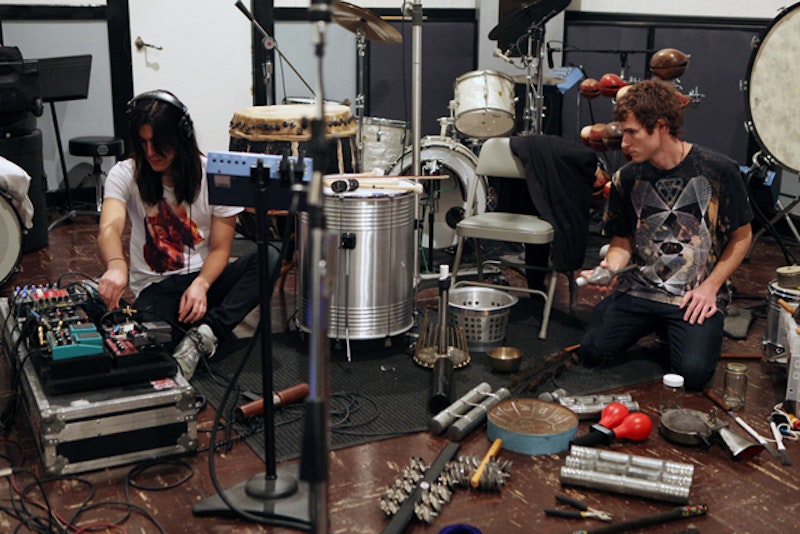 Inherently radioactive, the music of HEALTH sounds like it’s in an eternal state of decomposition: proper chords wrung from guitars spindle and throb into a fluorescent blur indistinguishable from the sounds the Zoothorn excretes; drumbeats clobber, are temporarily relieved of their density, or desiccate into wilder rhythms; vocals triple, contort, and drip impossibly in endorphin-saturated facsimiles of choirs. Tucking into HEALTH, the Los Angeles foursome’s 2007, or 2009 follow-up Get Color (both via Lovepump United) is sort of like donning scuba gear, at night, to dive to the undersea crash site of an eerily glowing asteroid with messianic -qua-lysergic properties. Their restless, undertow drone is at once petrifying and beguiling, giving off an uneasy vibe that’s nonetheless difficult to resist.

In a sense, on Max Payne 3 (Rockstar)—the soundtrack to the third installment of a hyper-violent video game franchise—the band gets up to standard-enough soundtrack stuff. There are recurring motifs, textures tortured for emphasis, movements that suggest throttled clarions, almost zero vocals. Where studio HEALTH often feels like an approaching onslaught of demonic stallions, soundtrack HEALTH is something less governed by form, more prone to passionate gesticulations and disembodied zoned-outs. Yet there’s a pensive percolation to tracks like “Shells,” where hiccup-tones intertwine double-helix like while ghostly swathes of electronic sound wash indifferently in and out of earshot that eclipses the immediate functional context. And there’s something desperately touching and forlorn about the echoing, mood-ring sustain of “Pain” (a concept “16 320” extends into gothic and classical realms) and the way “Torture” effortlessly transforms the listener’s surroundings into an abandoned train car way out in the sticks, just before dusk. Even when the score opts to set pulses racing—see the percussion-drunk “Max: Favela,” all steam hissing from grates and pressure-cooking snarl, or the noise-ensconced clatter-patter of “Guns”—there’s an admirable degree of ingenuity and inventiveness at play that makes room for Litmus-test electronic curios like “The Imperial Place.”

Think of Max Payne 3 as a slight subversion of form, a shifting of gears greased with corporate cash en route to a rich deepening of the dark art-rock HEALTH was on its way to perfecting anyway. It’s like gazing into the mirror just before bed and catching a glimpse of a photorealist painter’s askew rendering of your world, and realizing that you’re tumbling slowly backwards into a bottomless mouth of madness. It’s also the best HEALTH album, so far.