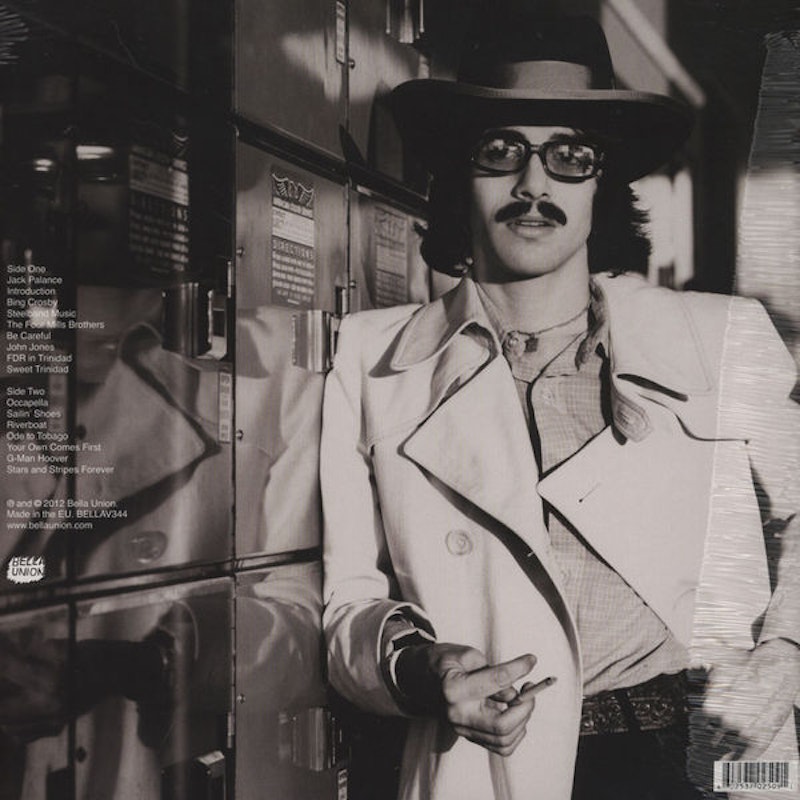 Brian Wilson’s psychotic insecurity and Mike Love’s infinite evil didn’t only derail what could’ve been the best American pop work of the 1960s (Smile), they set the stage for Van Dyke Parks to wallow in chronic anonymity for the rest of his life. Parks could’ve had the career and reputation of Brian Eno, Phil Spector, or David Bowie. He could’ve made multiple masterpieces instead of his one, Song Cycle. Maybe he could’ve influenced pop music for the better as a producer instead of a songwriter. But the fact is, we’ll never know the unknown legacy of Parks because he either lost the confidence or the will to make monumental works after Song Cycle famously tanked and Love derided the brilliant lyrics of “Cabinessence” and “Surf’s Up” as “acid alliteration,” mocking lines like “over and over the crow cries uncover the cornfield” and “columnated ruins domino,” only because Californian monkey bleach brain couldn’t process it.

So here we are: the year 2012, and Van Dyke Parks is still virtually unknown, even amongst enthusiastic music fans and musicians. Song Cycle doesn’t have that “always heard about it but never checked it out” status, like Husker Du does, or even the dB’s. Even with this month’s reissues of Parks’ first three solo albums (Song Cycle, Discover America, The Clang of the Yankee Reaper) on the small Bella Union label, his work still probably won’t get its proper due until he’s dead. Despite the conventional critical wisdom, all three of Parks’ solo albums are insatiably catchy, melodic, and fundamentally songwriter records. “By the People” or “The Attic” or “Laurel Canyon Blvd” have dozens upon dozens of drop-in parts, a few tempo changes, and a grandiose theatrical weirdness, hmmmmm sorta sounds like THE WHITE ALBUM (released within a week of Song Cycle). Parks’ reputation as a failed pop wizard precedes any fresh evaluation of his work, judging by recent reviews of the reissues that continue to pigeonhole him as an inaccessible, pretentious prodigy that took 60s experimentation too far. This is moronic, and the critical dismissal still reeks of insecurity, as if to say, “Only the chicest of the chic understand this. He’s ours. Don’t bother.”

Horseshit. Even if you can’t swing Song Cycle soundtracking a pool party, Parks’ second album, though lighter and less “heady” than its 1968 predecessor, is a buoyant collection of calypso songs that will always be a great record for the summer. Discover America is a nearly flawless collection, as accessible and “songy” a record as Parks will ever make. It’s not the kind of album you need to digest and listen to 10 times before it makes sense—songs like “Steelband Music,” “Bing Crosby,” “Occapella,” “John Jones,” “FDR in Trinidad,” “Sweet Trinidad,” “Sailin’ Shoes,” and “Ode to Tobago” hit you right in the forehead. This music is breezy, sweet, communal, sea salty, sun-bathed—there’s no better record to swim to. It’s party music, not for drunken debauchery or hip posing. It reminds me of birthday parties as a little kid, it has that purity of spirit and joie de vivre that’s totally uncomplicated and free. It’s a record for all ages.

It’s maddening imagining what could’ve been had Parks been supported commercially and creatively instead of soundly rejected even by the weirdos. His erudition, savant-like arranging and writing abilities, and impressive ambition were squashed so young, before he had a chance to see what a huge impact his work had on the people that heard it. He’s disappeared into arranging and producing in the dark since, and from the banter at some of his recent concerts, still harbors resentment for the illustrious career that was denied. His is a cautionary tale in how horribly negative people can be and how disastrous the effect is on the artist. People like M. Night Shyamalan and Rivers Cuomo put so much energy into deeply personal works, only to be torn down as quickly as they were built up, for repeating themselves, being one-hit wonders, not being this or that.

Fact is, the critical class will always be deeply insecure because they can’t do what artists do, and if they could, they would. Artists contribute, they create worlds, tones, styles, and ideas that and invite the audience to hang out, maybe stay a while, and see what it’s like. Critics wish they could create something like that; it’s why writers hide behind whatever publication or outfit they work for, like the structure of a reputed magazine or website gives them anymore credibility or satisfaction with themselves. Critics are lonely, unsatisfied people who can’t express themselves, and it will always be that way. It’s the only way to explain how harshly they continue to negate and tear down artists that are actually talented, trying, and give a damn.

Van Dyke Parks is as brilliant as Brian Wilson, but we’ll never know the extent of his work because of critics and marketing executives. The man’s still around and waiting for his day to come, so give Discover America a spin or five this summer when you go to the swimming hole. You’ll quickly find everyone’s idea about the man is wrong, and that he’s, plain and simple, a great, great American songwriter.