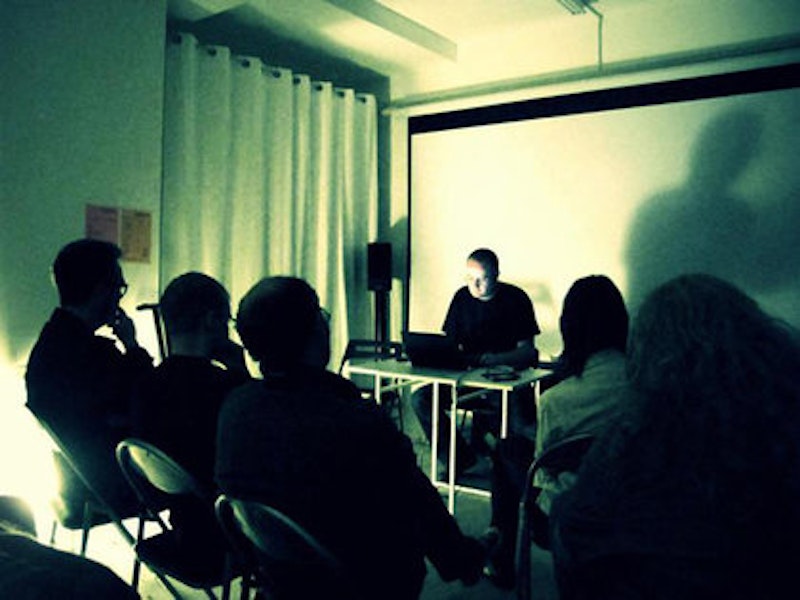 It’s true: writers screw up, we make mistakes. What’s missed on the first (or 15th) editing pass is (usually) preserved for posterity, and—obvious factual errors aside—the writer of a piece is typically the only one who can really gauge how wonderful or awful the piece actually is. So it goes for all artistic mediums. Likewise, only the U.K,’s Phil Julian—aka Cheapmachines—knows how huge a boner “Recent Errors” is. The first minute and change suggests the lowering of a straw into a domed stadium and the draining of several million gallons of soda by some unseen celestial.

An expanding, high-frequency modulation follows that’s a couple decibels shy of that room-aggravating squeal a microphone makes when somebody touches or adjusts it in just the wrong way; further on, robotic cicadas flirt desperately and noise entropy static-cling creeps down from your headphones to your clothes and a dial tone gazes balefully back at you. Strategic near-silences abound. There’s a winsome sublimity to “Errors” which has had me coming back for more and more since discovering the track some months back, and while nothing in this series of humming miniatures sounds like a mistake to these ears, I suspect that Julian’s happy not to revisit it as often as I do.

Hardcore punk’s extreme brevity is the key to its power: an ability to side step bullshit and cut straight to the heard of the matter at hand by getting in and out in the time it takes the average radio DJ to tease the debut of a hit song. Kansas City’s Meat Mist are as capable of condensing matter into extremely small spaces as, but I like how the 81 seconds of “WORLD OV SHIT” expand enough to breathe like a proper song would; there’s a chorus and verses, evolved hooks are in evidence, everything’s hard and gnarly and just this side of incoherent—to some extent they remind me of squeaking hinges on a trampoline, or just some rhythmically violent see-sawing—but nothing feels smudged or hassled, or, I should say, nothing seems excessively hassled. There’s a lot of purposeful lunging going down here, you know? Everybody in the studio should have been begging for administered oxygen after this sucker was cut.

Few pleasures in contemporary chart-rap compare with witnessing Rick Ross and Meek Mill, just Rick Ross and Meek Mill, nobody else, stunt on the same track. Their collaborations are dioramas of contrasting dynamics: the Boss’s beefy, declarative bluster lord-of-the-jungle assured, Mill’s fast, furious flow occupying every square inch of sonic real-estate as if his life depended on it. It’s a Mutt and Jeff thing; these guys complete each other.

This is key, because on their own respective albums, Ross and Mill lose me after a couple songs. And while Young Shun’s monotonous horror-snore production shuts “Black Magic” out of the league of, say, “Perfectionist,” the charge of Mill rapping in delirious semi-circles—the dude has bars for days, seriously—ludicrously bored with jet-set players’ spoils whilst a booming Ross invokes David Copperfield on the chorus is nonetheless weirdly exhilarating.

Side note: “Black Magic” was the working title of 50 Cent’s forthcoming album until fairly recently, which can’t be a coincidence, can it? Side note II: nobody says “black magic” anywhere on “Black Magic,” which is very Alternative Nation of everybody involved. Side note III: every time you hear a girl say “Maybach Music” on a Maybach Music Group banger, another quarter materializes in Jessica Gomes’ piggybank.