Corgan Caught Up and Confused

The cultural climate makes Billy Corgan think he has to play it safe. 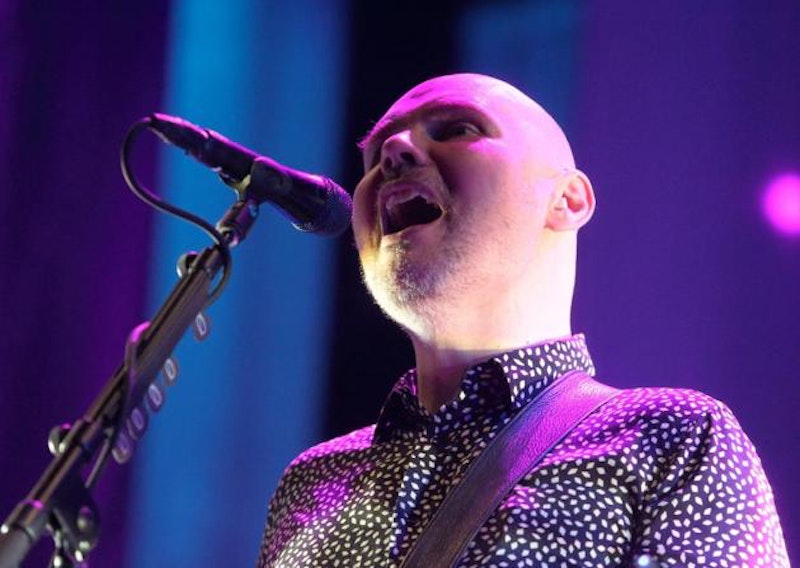 Instead of writing another rote review of a Smashing Pumpkins show, I’ll dwell elsewhere, even though I was late to The End Times Tour stop in Camden, NJ and only saw Marilyn Manson play “Lunchbox,” “Antichrist Superstar,” “The Beautiful People,” and “Coma White.” Even in those 20 minutes, there were Bibles on fire, Nazi-style podiums, knives attached to microphones, confetti cannons, pyrotechnics, and multiple costume and makeup changes. In four songs! Manson doesn’t play guitar on stage (and can barely play at all) so his show is a production and the production is the show. Manson’s latest album The Pale Emperor has been widely praised and based on the set list I looked up but didn’t see, there’s just as much new music as old hits. But he has his necessaries—half of which are covers, I realized. “Sweet Dreams,” and “Personal Jesus.” Bummed I missed “The Dope Show,” though. Manson threw himself, his bandmates and their instruments around the stage, looking like a microwaved corpse that escaped from the morgue. Though he was aided by backing tracks, he howled and shredded his voice over C-tuned guitar thrashing, much to the delight of all the corpulent Manson goths in the pit. Even with a successful new album at 46, he’s willing to play the ham and capitulate to his audience and give them exactly what they want.

Or maybe he doesn’t see it that way at all, that what the audience wants and what Manson wants are the same. Who knows: I know almost nothing about Marilyn Manson beyond the periphery, but his fans are rabid and regenerating. The same isn’t quite true for Billy Corgan and The Smashing Pumpkins, who’ve never had a good relationship with their audience, diehards and casual fans alike. I think Corgan feels like something is being taken from him by his most hardcore fans, and basically treats it like an abusive spouse—lots of manipulation and confusion. Don’t get me wrong, the Pumpkins were rockin’, and Jimmy Chamberlin back on drums for at least one tour is pretty great. But I doubt Corgan will ever be satisfied with the dichotomy in his fanbase. There will always be the people who leave after “1979” or “Zero,” and then there’s me, feeling chagrined that the band played 13 singles and not “Geek U.S.A.” For once, I staved off looking at set lists before the show, and since the tour started a month ago, I had a while to wait, and for my expectations to percolate. My friend and fellow Pumpkin diehard Jimmy MacMillan teased me with potential treats, but the only surprising deep cuts were “Mayonaise,” “The Crying Tree of Mercury,” and “Thru the Eyes of Ruby,” though the last two were spoiled for me by aimless scrolling through feeds and timelines full of Pumpkins-related people and blogs.

There was no banter, no antagonizing the crowd. Corgan is admittedly tired of offending and upsetting people, which he can’t really help, so he keeps his mouth shut. The unparalleled force and sonic clarity of their performance was remarkable, but it depresses me that Corgan has to censor himself in this cultural climate. He’s keenly aware that, more than ever, one tweet or one viral YouTube video can derail and ruin a person’s career overnight. When he went full-on art breakdown kamikaze during the 20th Anniversary Tour in 2008, he got awful press, but some of the stuff he said on stage back then would drown out any new music or serious endeavor.

He’s been mercilessly cyber-bullied over the past two years for being himself: for an eight-hour modular synthesis interpretation of Siddhartha, for posing with his cats for the cover of an animal charity magazine, and most recently, for looking sad on a ride at Disneyland (probably because he saw the photographer). You know what? Leave Billy alone. This is what’s forcing his hand to play static hits-heavy sets, instead of whatever the hell he wants to do. Corgan is caught in the middle, caught up in cultural politics, perpetually rejected by the fans who leave after watching the ghost of their youth play this or that single, and still stand-offish with his most rabid and morbidly obsessed fans, who will always be unsatisfied because no Smashing Pumpkins show will ever be eight hours long. The Pumpkins played great, but they didn’t seem to enjoy it.