The RIAA is infuriating, but Creative Commons could eventually destroy its purpose. 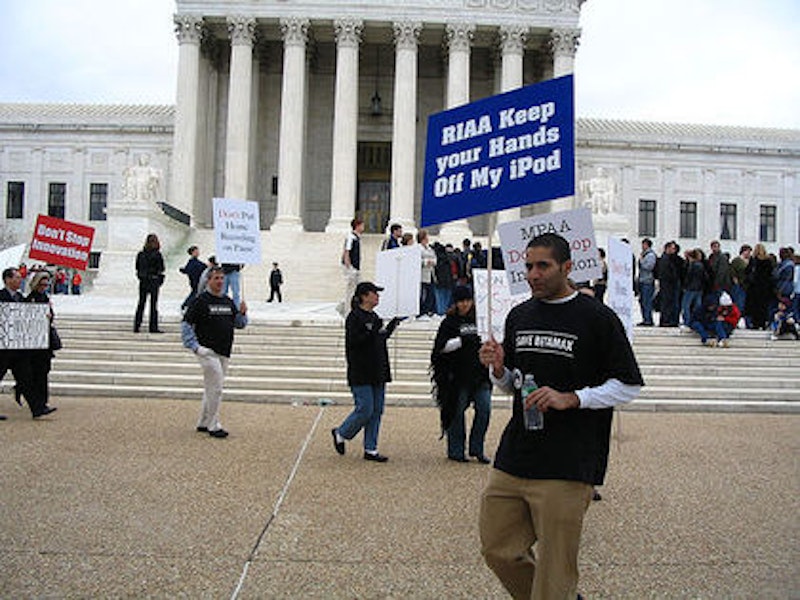 I’m not alone: I hate the Recording Industry Association of America.

Most people my age do. People in their 20s know the RIAA almost exclusively from articles in their student newspaper—some of which I wrote for The Michigan Daily—about the organization suing students for sharing songs under copyright. To date, about 30,000 people, many of them students, have been sued. Adults uninitiated into digital culture said "good riddance" to these kids, accusing them of stealing. How silly.

My thoughts on the RIAA improved slightly a few months ago when I heard they were stopping the lawsuits. The lawsuits were bad PR and they weren't working. Hallelujah! But not so fast! Never underestimate the will of an industry in search of profits. Now there is news the organization is enlisting ISPs—the likes of AT&T and Comcast—to go after those who breach copyright.

How did they muscle the ISPs into this? I'm no expert on telecommunications policy and the law, but my uneducated guess is they threatened to sue the ISPs for violators on its servers, and the ISPs figured it was easier to just comply. Yet this deal reeks of corporate collusion. If one ISP decides not to comply, which may still happen, users who had the choice might flock to them (the lack of real free choice among telecommunications providers is one of my big pet peeves). The RIAA/ISP deal only works if everybody's in on it.

This entire hullabaloo only underscores how silly and outdated copyright law is today—how silly it has been since its inception, really. Copyright violations happen all the time today and go unprosecuted—see YouTube—because companies simply find a way to make money through other channels. Post Grey's Anatomy on YouTube? Fine, come to ABC.com for the HD version! Yet copyright has been protecting the interests of companies since its invention (since 17th and 18th centuries), and typically an industry relents and finds a way for artists to "violate" copyright after discovering new profit channels.

Digital media presents a challenge to the arts industries, but do not be fooled: the RIAA is not defending artists. That's the crap they say to gain public support. In fact, artists have little control over the money they make on their songs these days. RIAA is protecting the companies, who take most of the money artists make. Because copyrights last decades, long after the artist dies, the industry can lock-in profits for years to come at the expense of artists, users and the public interest. It is corporate greed, plain and simple. And they are willing to wage the country's worst PR campaign—suing your customers! Nice!—in order to make a few extra dollars.

Let's also be honest about something: young people are not stealing. They are sharing, like those who once made VCR recordings of TV shows for friends (a court-approved practice the industry originally opposed). Lawrence Lessig has been the most impassioned voice in trying loosen our definitions of copyright to be more open, fostering creativity instead of criminalizing young people. Lessig's Creative Commons license, a free and easy way for artists to encourage others to use their work, is quite revolutionary and should become the standard among creative types working today. People my age have a different idea of what ownership means. We share and remix to create new art and are less profit-driven than others.

In fact most artists don't care too much about profits. That's because most artists will never make as much as those signed with Universal Music Group or with a distribution deal with Warner Bros. One of the most important movies about digital culture to date, LOL, has its soundtrack available for free download. As another example, I once made a YouTube video using a song by Mikel Rouse I heard at a Merce Cunningham performance and cited him next to the video. One day the artist himself commented on my page. I was scared. Was he going to sue me for copyright violation? No! He congratulated me on my interpretation of his work.

Most artists just want their work seen and heard. Corporations want to make money. Now two industries are colluding to stifle creativity and the advancement of the arts, which is the constitutional justification for copyright. People are powerless to stop it. When will the recording industry modernize and develop a viable alternative to file sharing? When will Congress, the administration, or some rich file-sharer finally stand up to these bullies and say enough is enough?