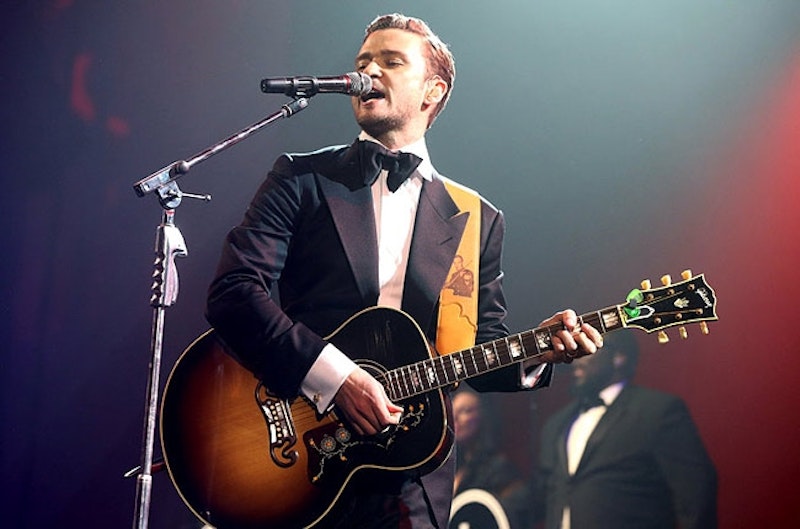 Justin Timberlake has been on a musical hiatus since 2007. Between co-starring in David Fincher's The Social Network and figuring as a key investor in the revamp of MySpace, the singer turned actor turned social media mogul hasn't had much time to focus on music. Somewhere in early 2013 though JT seems to have found the time to hit the studio. Whereas Futuresex/Lovesounds was very much a pop record, The 20/20 Experience finds him indulging in an interesting cocktail of electronic and soul sounds.

Timberlake's sound has always been influenced by his close association with super-producer Timbaland. That's been a bit of a double-edged sword at times, for as many bona fide hits as they've produced (“Cry Me a River”, “My Love”) there have been nearly as many lackluster album fill tracks. The 20/20 Experience is a bit better about addressing those concerns. Much of the album tends towards the extended jam format. Seemingly influenced by 70's soul and progressive rock it contains more than a few seven minute tunes. Album opener “Pusher Love Girl” is innocuous enough. Timberlake sings in falsetto over some occasional orchestra swells about an anonymous love. This, however, turns into bizarre territory without warning. Timberlake begins rapping about how this particular love has him hooked like a drug. Similarly, album single “Suit and Tie” feels a bit forced during Jay-Z's verse. It's awkward when the most successful hip hop artist of all time is relegated to a featured guest spot, delivered in a sedated way.

The album does improve rapidly though. In true Timbaland form the beat for “Don't Hold The Wall” can best be described as somewhere between Latin, Afro-Cuban, and sci-fi soundtrack. The addition of a few carnivalesque horns and MIDI pianos during the bridge backed by a crunchy analog drum machine works surprisingly well to lock down the groove. “Strawberry Bubblegum” with its warped orchestra stabs, video game hi-hats, and synths sound more Vespertine-era Bjӧrk than anything he's pressed to record. Similarly, “Tunnel Vision” is a standout moment. Timberlake has always sounded at his best when trying to catch up to a beat. The desperate opera vocals of “Tunnel Vision” conveyed at 120bpm give a twisted stalker vibe to lyrics like “Just like a movie set/I'm zooming in on you.”

The 20/20 Experience seems keen on not only re-introducing its main star musically, but also lyrically. Nearly every track begins with some sort of narration. “That Girl” casts him as simply “JT from Memphis.” It's a neat trick given that it manages to be the most soul-sounding track of the album with a rhythm section and instrumentation that is almost entirely synthetic. But as much as Timberlake wishes to be seen in a different light, he will always sound like himself. Second album single “Mirrors” is the most lyrically complete and musically structured of anything on 20/20. However catchy it is though, it doesn't conceal the fact that it contains basically the same music as “Cry Me a River.” For a singer who has long fought to extinguish the memory of his boy band past, it isn't so bad to be in a position where he can only be accused of being too much himself.