Bonnie Raitt: The Perils and Triumphs of Rootsy Easy-Listening

Raitt's new album, Slipstream, is more of the same, which isn't good. 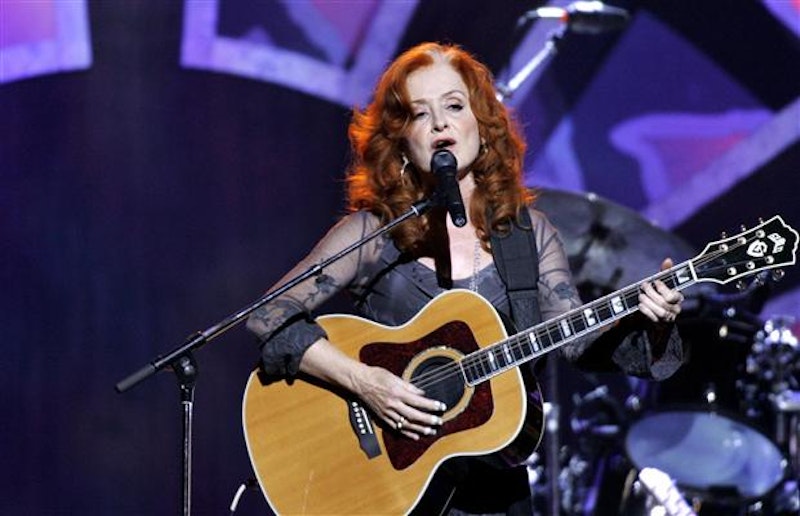 Bonnie Raitt's always had a bit of pop in her roots. Her 1971 self-titled debut included appearances by stone blues royalty A.C. Reed and Junior Wells covering contemporary pop tunes like Stephen Stills' "Bluebird" and the Marvelettes’ "Danger Heartbreak Dead Ahead." Two decades later, she was still at it. The title track of Nick of Time put Raitt's earthy/sexy blues-pop voice over 80s drum machine and keyboards. With Don Was producing, the result is an authentic schlock charge that tore up AM radio. Blues becomes sentimental pap, sentimental pap becomes blues, and both of them are deployed in the interest of lyrics about getting older, watching your parents age, and listening to your friends tell you about their marriage falling apart. It's middle-of-the-road music for boring middle-aged people—and as a precociously middle-aged twentysomething, I found it irresistible.

Raitt's next album 1991's Luck of the Draw was even more successful with the same formula—some blues licks, that smooth, real voice, smarmy easy listening tunes delivered like they were roots truth and roots truth delivered like it was smarmy easy listening. "Something To Talk About" opens with a ridiculous giant crappy thudding drum and a background chorus that sounds like its had its collective brains scooped out with a mellon-baller, all juxtaposed with Raitt's growling guitar and that drawled "darlin'" which never fails to make me need to sit down and fan myself.   It's both gee whiz corny and smolderingly sexy—a come hither anthem for Middle America.

In short, Raitt's appeal lies not in being "real," or gratuitously ersatz, like Madonna or Bowie or even the Carpenters. Rather, when she's on, she's on because she's a little bit authentic, a little bit pop—solidly middle-of-the-road. At her best, she sounds both tough and clueless; both knowing and approachable, as on the aching schmaltz heartbreak of Luck of the Draw's "I Can't Make You Love Me."

Alas, the roots/pop balancing act is inherently unstable; step wrong one way and you're recording pallid blues; step wrong the other way and you're putting out unlistenable pap. Raitt's done both. Her second album, Give It Up, is lauded as a triumph of authentic blues-rock, but can also be seen as an exercise in irrelevance. If I wanted to listen to a tasteful, competent album, I'd go for Billie Holiday or Van Morrison or someone else with talent, you know?

Slipstream, Raitt's latest release, tips over in the other direction. There's still the blooze, of course, but even that seems pro-forma at this point in her career—just another hollow gimmick like the keyboards and the drums and the vocal chorus.  The reggae-lite of "Right Down the Line" is one of those vapid, peppy tunes that makes you leap for the radio off-switch—a could-have-been earthier "Shiny Happy People," if Raitt had the hit-making power of yore. "Marriage Made in Hollywood," figures Raitt as bland scold, mildly deriding our celebrity culture with all the satiric bite of a toothless, shapeless crooning bivalve. Whoever decided that Raitt would make a good social commenter needs a swift kick in the reality programming.

Still, there are moments of adequacy. Raitt's voice sounds a little older and strained, but her phrasing can still hold your attention. When she sings "I would be crazy if I took you back," on "Standing in the Doorway Crying," you can feel the desire and the resignation. The opening lines of "God Only Knows" ("Darkness settles on the ground/leaves the day stumbling blind,") deliver a bleak, charge… before the tune degenerates into Billy Joel-esque earnest piano confessional.

Raitt was never a great artist, or even, arguably, a very good one. Still, she managed to parlay her aesthetic incoherence, bad taste, and that marvelous voice into some of my favorite pop ever. I doubt she'll ever make another bearable album. I'm just grateful, and a little surprised, that she ever made any.