A smile for Lana Del Rey. 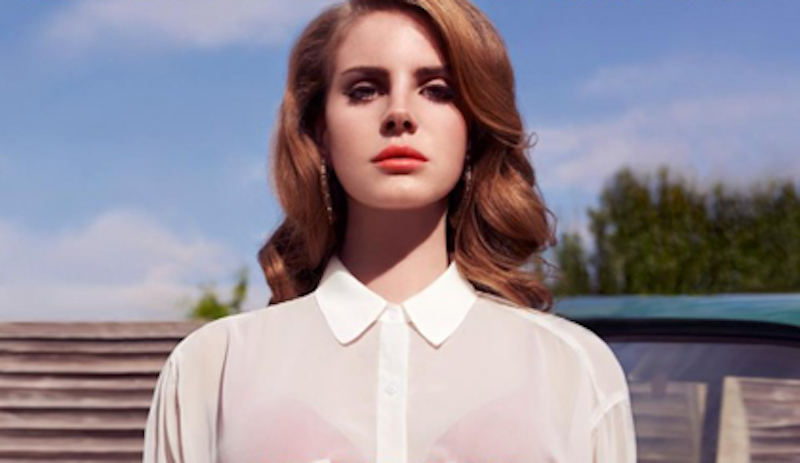 Lana Del Rey may be Elizabeth Woolridge Grant, or Lizzy Grant, or someone who can't sing, or one of our generation's greatest performers. The arguments surrounding her music and talent are less interesting than the cultural climate by which her career is made possible. A placid wall of image and marketing, her songs—however tediously fixed and adjusted in the studio, and despite being formally conventional and uninteresting—are amazingly beautiful in their unexpected mix of shallowness and earnestness. I don't believe she, or her various agents, are being self-aware about her persona, the way other image-centric cultural chameleon females in her camp (i.e. Madonna et al) are. The history of women playing roles, or rather conceding to the roles imposed on them (at its best thrillingly explored by artist Cindy Sherman), goes back to religious images of the actual Madonna holding, at times nursing, an infant Jesus. The valley of fantasy may be found between two breasts, our patriarchy still compensating for his curtailed childhood.

Though here, the fantasies are the romantic lives we should have lived, if only coaxed by this sexily low and eerily maternal voice. The video for "Video Games" has the look of a Dad-edited home movie: grainy lo-fi footage using 1970s film technology being filmed now, as if the reoccurring young couple central to the video are forever kissing each other in the past, without a future. They share a moped down a small idyllically pastoral road while synthesizer effects evoke a string quartet, each violin played by an engineer's finger. Lana leans against an ambiguous wall, addressing our gaze with her own, blandly, as if barely smitten by this relationship. Still, she pouts.

One may remember her cringe-worthy SNL performance that exposed the fact that she can't sing, at least not the way Janis Joplin, Joni Mitchell, or her precedent Nancy Sinatra could. It was awful, the audience clapping in humiliation with her. I would not call Lana Del Rey talented or a fraud. She is simply someone we found, or made, in our late schizophrenic cultural schism: an idea of a great musician, whose actual great songs serve to corroborate the former lie. Vapidity begets profundity. Her entire role is ostensibly not having one, an awkward naturalism miming something sentimental than never happened.

The cover of Born to Die has Del Rey wearing a button-up blouse in front of a station wagon and fence subliminally marking the perimeter of a suburban home. She’s the girl next door. The seemingly counter-intuitive conservatism of her outfit brings to mind Sasha Grey's Vice cover, on which she wears a demure girl's shirt buttoned to the collar (though the naughty smirk addressing what lies underneath is, well, naughty). With Lana, however, there is no endless loop of medium and message; rather, she looks straight into the camera, stoic, unsmiling, as if bracing herself for those who would reduce her to the current “it” girl, which she may well be, though her collateral damage is brilliant. Let us assume her collagen-injected lips are paralyzing some smile, sadly swooning and occasionally auto-tuned. I imagine listening to her songs 10 years from now: the hauntingly empty feeling of something so beautiful that barely happened.