The Four Types of Record Collectors

From the hopelessly addicted to the relatively sane. 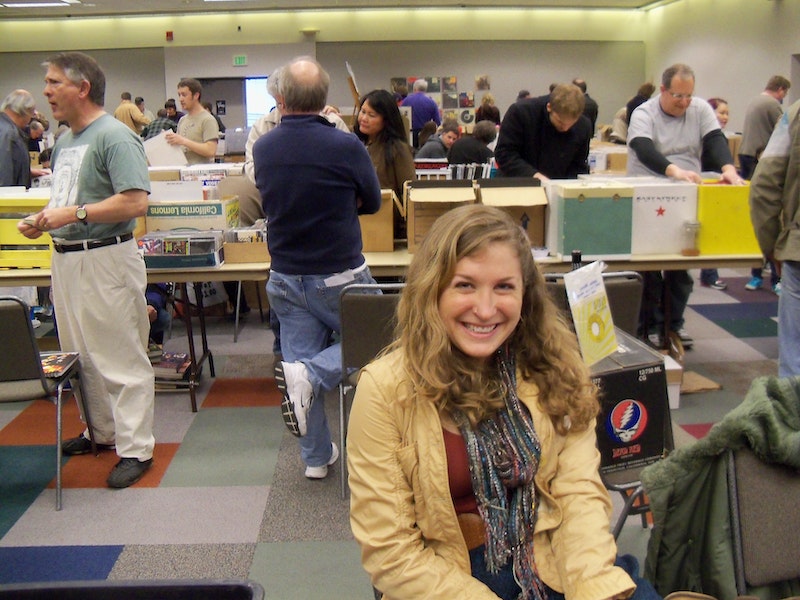 Judging by some of the baffled looks I received when I told people that I’d spent most of my weekend preparing for, and attending a record show, not everyone is familiar with this particular brand of crazy. A record show isn’t like a car show: it’s more like a pop-up record store, with dozens of dealers, hundreds of collectors and tens of thousands of records, the honey for the covetous fiends who show up at six a.m., load in, getting grip sweats and shaking like junkies who know that next fix is somewhere in that plastic milk crate.

I’ve been to a lot of these affairs, starting in middle school, when I’d tag along with a friend and his older brothers for the two and a half hour trek through Amish country for the bi-monthly record show. Twelve years later, I can say I’ve been to shows on the East Coast, Midwest and West Coast and while each one had it’s own vibe, some good, some terrible, some great, they all featured the exact same cast of characters. My fascination with the incomprehensible weirdness of humanity combined with my decade of record store experience has made me more than familiar with these addicts. And, I’ll concede, it takes one to know one.

Here are the four types of record collectors, in decreasing level of fiendishness:

I suppose there is no reason to stop buying records just because you’re nearly deaf (incidentally, these guys almost always have an impressive tuft of hair growing out of their ears) and already own 9000 of them, but you’d think that after a lifetime of hoarding you’d realize that there are more than enough records for everybody and it is simply not cool to throw your elbows around like Dikembe Mutombo in the post because you don’t want anyone else to look at the boxes to either side of you. Exhale. I actually think it’s kind of funny, in a sick, sad sort of way. And if it weren’t for these guys the market for doo-wop records would instantly collapse.

Other identifying features: Perpetual bachelorhood, a vocalized contempt for “this rap crap,” and the desire to endlessly regale you with stories about how much better things used to be before that damn Interweb eBay nonsense. I often catch them sniffing records, perhaps brain damaged from mold inhalation.

The British were the first to recognize the value in non-charting American soul 45’s on small labels, and literally wrote the first price guide to rare records. You could argue Japanese people appreciate American jazz music more than Americans do. And if you sell records, you’ve come across one of these guys you just know is taking your records back to his home country and marking them up 300 percent. Of course, there’s nothing wrong with that—everyone profits, and in my experience these guys rarely haggle. If you’re ever in Tokyo, holler at those minty fresh Blue Note LP’s for me.

Other identifying features: A meticulous eye for even the tiniest of scratches, a Zen-like poker face, the ability to tell which pressing a record is by the address on the label, a particular lust for original Beatles records (to be fair, this is universal), and most importantly, a fat wad of cash.

Did you know that possessing more arcane musical knowledge than everyone else in the room entitles you to act like an arrogant jerk? Me neither. This behavior is likely a result of years of pent up frustration from being misunderstood (by the opposite sex) as creepy, rather than a bastion of fine taste with a world class collection and “Jesus you’ve never heard of this ridiculously obscure, inept local garage 45 some kid had 50 copies pressed in 1968 by his Dad for his Bar Mitzvah? It’s worth $850!” Ironically, this person typically despises the only people who would ever put up with the endless reciting of dates, facts and values—other nerds.

Other identifying features: The ability to talk completely out of their ass. Seriously, I’ve seen this type of person spend hours in thrift stores looking up every single 45 on their phones in between describing every other strange looking thing they see as “psych” to anyone who will listen. Also: a t-shirt from a concert that happened before they were born, a crush on Nico and an un-ironic reverence for The Monkees.

Also known as “friends.” This group includes females (don’t expect many!), minorities and the generous, all of whom are extremely rare jewels that seem to value relationships over objects. When I encounter one of these people, they get a massive discount, genuine enthusiasm and truly, my deepest love. If not for these people, I’d have no counter to the argument that collecting records is tantamount to insanity.

Other indentifying features: The understanding life doesn’t tend to revolve solely around the acquisition of records, in as much as the sharing of good music and the joy of new discoveries. Eclectic taste. Conceivably able to have sex without paying for it. Often heard saying, “I have two copies, you can have this one.”