On the band's best album, The Air Force. 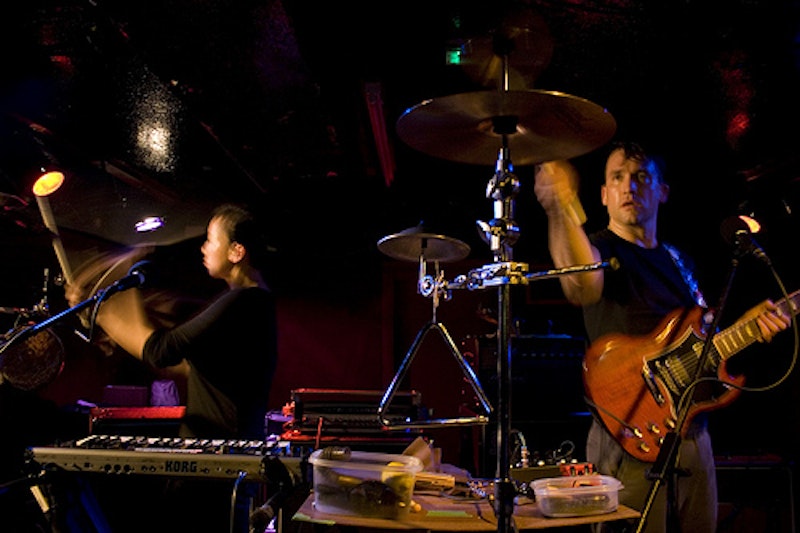 I love Xiu Xiu; they’re one of our most important bands. Jamie Stewart and co.’s brash and abrasive electro pop sound and lyrical focus on child abuse, rape, murder, and suicide make them far more potent than any of their synthy peers. Xiu Xiu is an island unto themselves, and none of the members seem even remotely interested in touching the territory they’ve covered. Thing is, as much as I love the band and what they do, I could never fully get behind any of their albums, except 2006’s The Air Force. Everyone always immediately goes to Fabulous Muscles or even their debut Knife Play, but I find it really peculiar that The Air Force is so underappreciated, even by Xiu Xiu fans. It’s a beautiful record, tackling the same past traumas and ugliness but with more grace than anything else before or after. The Air Force combines doll-like innocence and pretty sounds with the most horrific assault and totally vicious noise. It’s the Xiu Xiu M.O., and they haven’t bested it since.

Even if I haven’t been able to deeply appreciate any other Xiu Xius record, they’re still one of my favorite bands because of how intensely honest they are. Jamie Stewart has made it clear through interviews over the years that he and his siblings were abused as kids, and it creeps up frequently, especially on The Air Force. So goes the chorus of “Vulture Piano”: “You could say it’s nothing/You could claim there’s no one to hide/You could be/respectable and/keep it to yourself/at least, you should know/she was the best that you’ve had.” Stewart crams all the bitterness and hate he can muster into those italicized words, cast against a melancholy but buoyant synth progression and interspersed with frenzied noise blasts. Stewart is getting his revenge, but it’s not messy or alienating, even though these songs sound utterly molested and damaged, their beauty remains, and he really won in the end.

“My brother and sister and I/trying to make some sense of this,” goes “PJ in the Streets…” Auto harp waves, strangled little baby voices mewing from the bottom, “It’s just a fleeting thought, though/For there is nothing in our wondering/Night in, night out/Love begins and love ends/the red sun rises/sadness is still in print/My royal name is Cyrus the Selfish/and yours…/Panic in the Streets of London.” All the little sounds swell, autoharps, gentle upright bases, and a wave of distorted horn sounds, all come crashing down. Stewart’s voice is very emotive and will probably remind you of Morrissey, but sonically Xiu Xiu is so far beyond anything the Moz has attempted since the late 80s. The music is a perfect reflection of the horrible, humiliating anguish that sexual abuse brings. It’s a messy, emotional, Barbie-pretty one moment and prison rape dark the next. But it doesn’t try to needle you at every other turn. It’s a very sad record, but it’s their true triumph, full of grace and reflective. “When we see the hate in your eyes, it doesn’t make us better men.” Stewart isn’t crying, screaming, or throwing a tantrum out of panic: he uses all these pieces to put together this shimmering, beautifully damaged portrait of molested children. It’s not grotesque at all, though: The Air Force is a completely triumph against his abuser. It’s a “Look where I am, look where you are. Fuck You” record like no other. This isn’t jilted lovers we’re talking about. There’s pain in every single sound. That’s why Xiu Xiu is one of our most important bands—even if it’s not consistent or manageable all the time, they’re easily making the most emotionally potent and real music these days.

On every other record of theirs I’ve tried to absorb, these elements are not as gelled or consistent as on The Air Force: there’s no graphic anti-military rants, “I Luv Abortion,” or tales of transvestites with AIDS. This is a brother standing up for himself and his siblings and showing just how much of a worthless slug that person is. “She was the best that you’ve had,” and “you” will never make any art as magnificent as this. The Air Force is the most emotionally visceral record I’ve ever heard.