Americana is too simplistic a term. 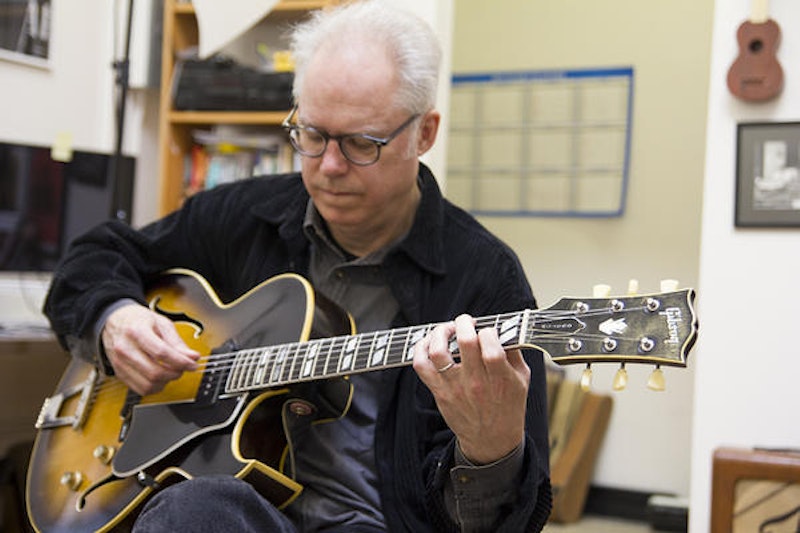 American jazz guitarist Bill Frisell, whose new record Small Town has just been released, is one of America’s greatest purveyors of cultural appropriation. It’s what makes him an American artist of soul, daring, and vision.

He’s also been called “too white” by NPR, but I’ll get to that.

Frisell’s style has been called “Americana." He has recorded pieces by American greats Stephen Foster, Charles Ives, and Aaron Copland. But Frisell was also member of Naked City, the avant-garde group of improvisational musicians who gathered in New York in the late-1980s and early-'90s, playing everything from bebop to the James Bond theme. Frisell has also played country, surprising jazz fans with the 1997 bluegrass-meets-jazz album Nashville, which was named album of the year by Downbeat. Influenced by Wes Montgomery, Sonny Rollins, Bill Evans, Thelonious Monk, Miles Davis, John Coltrane, and Charlie Parker, Frisell has recorded songs by the Beach Boys, Elvis Costello, Marvin Gaye, and even Madonna. Later this year, a documentary about him will be released.

"I like when it's impossible to tell at first if something is black or white, or country or blues, or whatever," Frisell, who was born in Baltimore, raised in Colorado, spent years in New York and now lives in Seattle, once told an interviewer. "The simplistic way of looking at it is to say a lot of the stuff we listen to now started in Africa and evolved into the blues and jazz and everything else when it came to America. But you hear some of these contemporary African guitar players, and you can tell that they've been listening to hillbilly records.”

Frisell, 66, has a distinct style, using reverb, bell-like harmonics, distortion, and feedback loops supplied by a machine called the Electro-Harmonix delay, to produce a chiming, questing sound that is at once intimate, grand, open-ended, and introspective. One of the best examples of the Frisell aesthetic is his cover of the Motown classic “I Heard It Through the Grapevine.” Sounding soulful, experimental, and with touches of feedback and a hint of country, the eight-minute rendition explores the melody and architecture of the song in an entirely new way. The guitar echoes with apprehension, fitting for a song about news of an affair, but also chimes with a hint of redemption and takes time to explore the cosmos. One would be hard-pressed to categorize it. Free Jazz? Pop? Country? Experimental? Yes, yes, and yes.

Frisell embodies the spirit of Western culture, its practice of honoring traditions, culture, and hard work while also embracing experimentalism and the push to new frontiers. It’s no wonder one of Frisell’s albums is called The Declaration of Musical Independence.

Perhaps predictably, Frisell’s turn towards American music, that began with Nashville and continued through albums like 2014’s Guitar in the Space Age and 2016’s When You Wish Upon a Star, has not been welcomed by everyone. For too many modern critics, music has to have a certain level of confrontation or outrage to be valid. Shelby Steele once noted that in the 1960s it became virtuous to show bad faith towards America. It’s still considered cool be express suspicion towards the United States, never mind the unabashed celebration of her musical heritage that Frisell exemplifies (I’ve no idea what Frisell’s politics are). Critics may have had some excited anticipation when it was revealed in 1992 that Frisell was going to cover a song by Madonna, who has never expressed anything but contempt for America. Yet Frisell chose “Live to Tell,” a ballad about overcoming personal suffering and Madonna’s only truly great song.

In a 2014 review of Guitar in the Space Age, David A. Graham of The Atlantic wrote: “Overall, however, it’s a little too perfect for the NPR crowd: middle-aged, kinda eclectic, but not very adventurous. Perhaps unavoidably for a set so heavily geared to surf tunes, it also feels awfully white.” This is an unfortunate opinion, the words of a man far more limited in imagination than the artist he’s covering.