Music That Isn't Planning to Change the World

New releases by Dustin Wong & Takako Minekawa, My Purest Heart for You, and Red Pill. 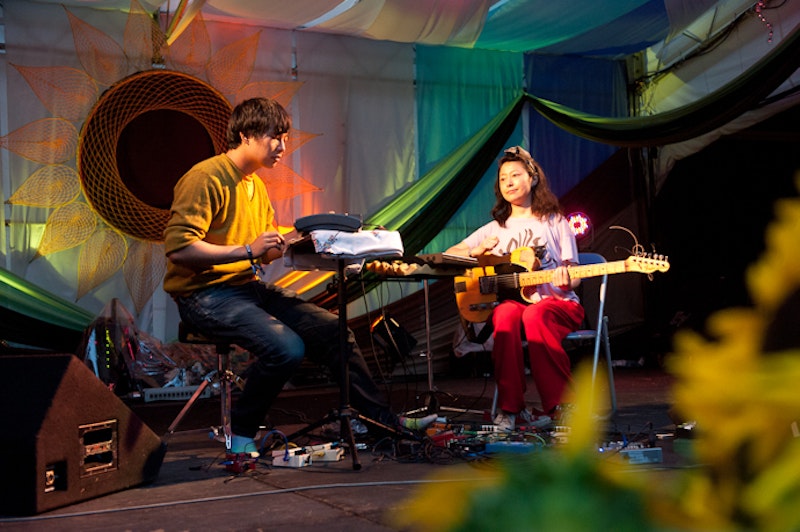 Big album releases, like Jay-Z's 4:44 or Beyonce's Lemonade tend to make big statements. They're ambitious events that turn personal material (like infidelity) into universal lessons or commentary. That's part of pop’s exhilaration—the feeling that you're participating in a widely-shared experience, where one person is speaking for everyone and everyone is speaking for one person.

Event albums can be great. But there's also a pleasure in listening to performers who know they’re reaching a handful of people, rather than millions. Stars are appealing because they're bigger than life, but smaller-than-life-art has its charms as well. Here are three recent releases that succeed by not trying to take over the world.

Wong and Minekawa make textured, noodly, inspirational foot-tapping elevator muzak. "Benbelo" has a chirping flute noise cycling and looping along while washes of dreamy sound rush towards the galaxies—you could see it being used as the background for an ad selling insurance to prospective robot space travelers. "Elastic Astral Peel" clicks, trundles, and squeaks along as vaguely Eastern cymbal-like keyboard sounds offer a counterpoint and then singers come in, yodeling ecstatically in a forest as the laptops twitter form the trees. It's fey, winking, cutesy music, pretty and precious, committed to trivial profundity and profound triviality.

None of that is meant as a negative; Are Euphoria is a delightfully small record, filled with hummable tunes, odd noises, and fun ideas. You could see children loving it—and for that matter most of these songs would make a great background for Sesame Street animations. Which is high praise.

My Purest Heart for You—Tragic End

Wong and Minekawa are turned whimsically inward; My Purest Heart for You is rolled into a ball of despair. The mysterious black metal outfit's first EP, Grief Has Ambushed Me Once Again, which I wrote about here last year was a lovely, anxious fusion of shoegaze and black metal. Their newest effort is even more lyrically melodic. Each track puts what sound like romantic classical strings and melodies under feedback hiss and distant screaming. Listening to it is actively disorienting, as your brain gropes for the tune under the painful static. Tragic End is almost a trick for getting you to fall into your own skull and never surface—an exercise in isolation.

“Don't work, just party—you'll be all right.  Don't try so hard. Just live your life," Michigan rapper Red Pill muses on his first Paul White guest-produced track "What You Wish For." The initial lowering of expectations is indicative; over laid-back beats and low-key catchy hooks, Red Pill describes himself as a fat Jesse Eisenberg and chats about eating chicken vindaloo while doing an interview in the nude and checking Instagram.  On "Inside" he compares himself to an unloaded gun; on "Fly on a Window" he raps about cleaning the kitchen floor. "Porn & Milk" finds him rapping about his morning ritual: "I dread to look at my balance/as I dread that frozen toilet I'm about to put my ass on."

The porn and milk of the title isn't a sex scenario, but a description of what the guy behind him in line at the mini-mart is buying. On the great "Probably Not," produced by Illingsworth, Red Pill dourly observes, "I get invited to my high school reunion so my whole night is ruined/Hey Susan. What have I bee doing?/Making a living writing about how I hate humans." This is anti-gangsta rap; instead of a tough guy boasting of his conquests, Red Pill chronicles the steady drumbeat of minutia kicking his ass. "Someday I'm going to change my ways/but probably not," he says. That's a rallying cry for the rest of us.