The Beatles Really Bored Me the First Time I Heard Them 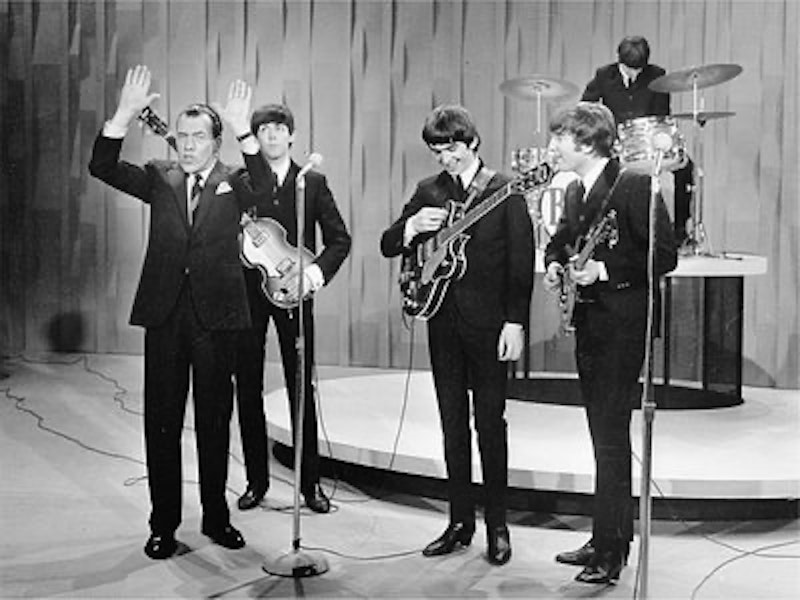 I’m not sure if I remember Beatlemania. Perhaps the tail end of it. My brother was given a copy of the Help album, I think for Christmas 1965. Would that count? I think my mother told me about their being on The Ed Sullivan Show, and I wasn’t clear on what that was. I never saw them, not even on TV. I think that last is a dividing line in Beatle-land: between those who saw them on TV and those who didn’t. I just sneak into the second category, where I’ve been joined by generations of further recruits. What we missed was the experience of looking at the screen and not believing that you saw what you saw: those four young men with hair down to here, freak coiffures, and the four guys mouthing off like birds that sing. The fellas turn moments upside down, and they’re happy to do it. Whoever’s around them becomes happy too. The host (grill haircut) in his suit (car-door lapels) can’t help himself. His shoulders jump, his chin points down; a new smile cracks through the official smile he had in place.

At home people lean closer. They wonder at the boys. How could anybody look like that? And, next, can you tell them apart? After finding that, yes, you can, the people marvel at the crew’s different looks and personalities, at the sheer variety of long-haired boys suddenly on display. Meanwhile, the boys chatter. Listening to the words fly, watching them bounce among those unique fur domes, people considered themselves dropped into a new realm of communication, one found only around these four unique boys. No one had ever thought that being, just opening your mouth and saying hello, could have such snap, be an event. The younger the spectator, the more they felt this way. Here these boys were and the future had finally begun. Now was finally happening.

The younger the spectator, but only down to seven or so. At my level the Beatles were grown-up doings, and such doings were forced on the world—imposed from above—rather than naturally occurring. A crack in a rock with moss on one side and a bird dropping on the other—one came upon such a thing and could consider it at leisure. A Beatle, on the other hand, was a rumor handed down by adults and an older sibling. They insisted the thing was important because crowds of other people, who one did not know, found the thing important.

On my first encounter, I was far from convinced. This was in my parents’ bedroom, where my brother had the rare privilege of working their stereo. We listened to the Beatles, meaning Help, and I learned how boring adults could be. The record was the U.S. Help, though I don’t blame George Martin’s orchestral interludes for my ennui. They didn’t help, of course. Henry Mancini did such things better, and the sitar (at least as handled here) sprinkled the tracks in question with a combination of sour twang and clamorous squawk that acted as ear repellent. And a child, after hearing about the Beatles, didn’t feature hearing some other adult thing that had been harked out of nowhere. But the tracks proved less boring than the songs by the Beatles. These weighed down the room with a mournful, constricted droning that was supposed to be fun.

One reads now that the Beatles were sagging after a couple years of Beatlemania. Lennon and McCartney continued producing songs, just as a dog continues having a tail. But the now the tail was pointing down instead of up: “The Night Before,” “Hide My Love Away,” “Another Girl.” These are dreary, baying songs that fail to advance. “Help” is better, but only by reducing the flaws in question, not by overcoming them. “Ticket to Ride” is a landmark but heavy going. “I Need You,” George’s song, is as much fun as wet snow under your clothes. Admittedly the fading guitar fills are a good effect, but they’re languid to begin with and then stranded above George’s drizzly gray field of a songscape. “You’re Going to Lose That Girl” is the one winner: even if you’re mordant and spiteful, you can show some lilt. This song has the same gallop as the Beatles’ very early hits, though now with a sour stomach.

That’s my view today, and it fits with my reaction then. Another thing hasn’t really changed either. Looking at Help’s album cover and its photos, I didn’t see the four bold guys from tomorrow. Out in the snow they looked blanched and puffy-faced, just lumpy grown-ups. Their moptop uniformity had already begun to fray, and here they were equipped for skiing. There was one fellow with goggles, I think, and another with a tall hat, and their four unique haircuts not quite in view.

One reads now that they were stoned and that, even if straight, they couldn’t have seen much reason to what they were doing. As movies go, Help was no one’s passion project. Yet it had to get made: there was the money. The boys were caught under something that was bigger than they were. A mile-long blanket had fallen atop them, and they didn’t know where it ended, or if it did. So, looking at them, I didn’t fall in love. But years later, when I began listening to the Beatles again and reading about them, I recognized them. They were the same guys, the boys on the slope, wondering why they were there and what had hit them.