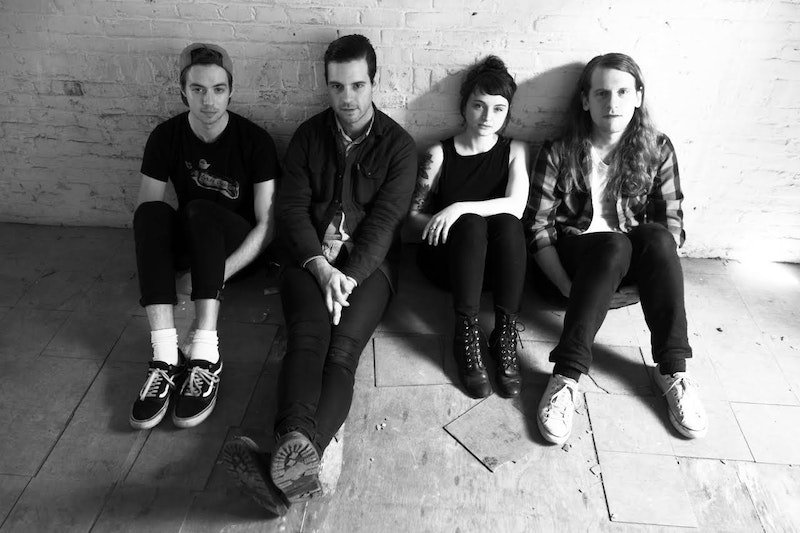 In mid-July, above a Mexican restaurant in Bushwick, Katie Ellen played the second of two record-release shows for their remarkable debut album, Cowgirl Blues. Katie Ellen is the reconstituted project of two former members of Brooklyn pop-punk group Chumped. In the aftermath of Chumped’s early success and dissolution in 2016, lead singer Anika Pyle sat down to write a record about the interdependency of companionship, autonomy, and creativity.

While Chumped offered power-pop brimming with angst and attitude, Katie Ellen fuses indie, punk, and folk sensibilities to wade into a pool of melancholy, introspection, and hard truths. But if that sounds tedious, it’s not; at 10 tracks and 29 minutes, Cowgirl Blues is concise and rousing. The tracklist is sonically balanced and evenly paced, with compact song lengths and shifts in energy that produce a wonderful sense of drama.

The real Kaytee Ellen’s struggle to control her radio persona in the face of capitalist domination dovetails with Cowgirl Blues’ central theme of maintaining feminist identity in the context of traditional, patriarchal structures like marriage and compulsory heterosexuality. Pyle’s been an outspoken figure in the last few years about the reemergence of punk as an expressive vehicle for female experience. In a 2014 essay for Vulture, Pyle wrote about the relationship between contemporary femininity and punk. “Punk has always been political and civic-minded,” she wrote, “and now the music is reflecting our culture’s current focus on the treatment of women.” In particular, Cowgirl Blues focuses on a problem familiar throughout the history of feminist theory, namely the fluidity and ambiguity of feminine identity itself. As Julia Kristeva once said of feminist practice: “That’s not it, and that’s still not it.”

Cowgirl Blues is the kind of record I picture Maggie Nelson listening to while she wrote The Argonauts, her 2015 memoir about queer identity, gender fluidity, and motherhood. “There is much to be learned from wanting something both ways,” Nelson wrote, and that’s precisely what Cowgirl Blues teaches us too. On “Sad Girls Club,” the statement that “sad girls don’t make good wives” isn’t delivered with bitterness, but instead with what feels like a sigh of relief. “Lucy Stone” demystifies marriage as a socio-economic prison; but even if “love is not enough,” rejecting love doesn't suffice either. The next track, “TV Dreams,” speaks of being miserable both with and without someone, as it explores the complicated condition of being there for someone by not being there. “Proposal” represents the record’s vulnerable, beating-heart center, a haunting acoustic eulogy to “the ultimate question.” And finally, on the title track, Pyle declares, “I could’ve been happy, I’d have never felt free.”

Anyone who engages with feminist theory knows that the struggle to reconcile one’s personal life with theory can be just as hard as the struggle to break free of external constraints. Control over personal identity is a messy thing; it entails not only freedom from others but also freedom from the conflicting demands we face on the inside. Sometimes those same identities, those ideas of ourselves that we spend so many years building up and protecting, seem to get up and walk away from us anyway. Such is the ambivalence of true independence; the pressure of having no one but yourself to depend on.

On Cowgirl Blues, freedom and happiness stand in dialectical tension with one another. It’s a record packed with paradox, a feminist concept album about the ambivalence that arises when you think as intensely as you feel. It’s a love letter to those who choose freedom over happiness, without ever truly giving up on the latter.