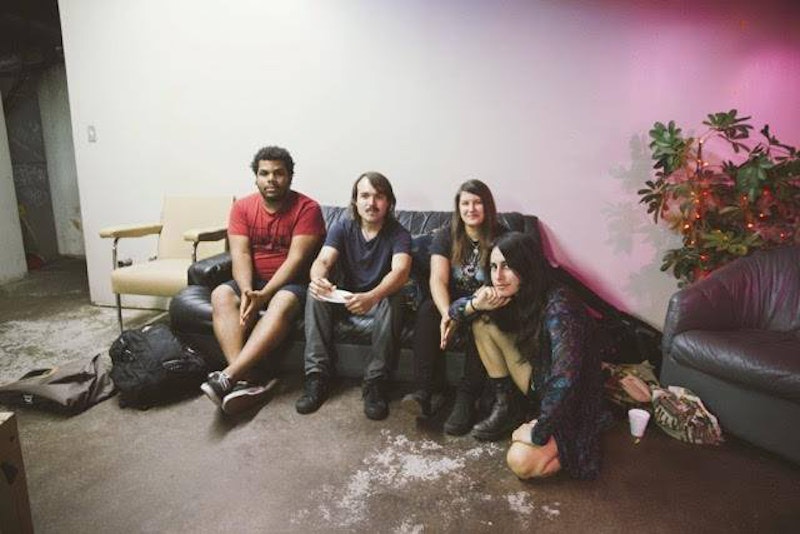 Baltimore’s Metro Gallery—matte black walls, comfortable seating, tony bar, fascinating art, situated across the street from the Charles Theater—made a mannered setting for Thursday night’s relatively convulsive bill. Local trio Wish List encompassed butt rock, brawny power pop, and arena thrash, with just a hint of metal; the vibe was fun, riotous, and silly, and the sheepish, singing drummer made a point of tossing a single stick high into the air and catching it. L.A.-based trio Colleen Green headlined, teaching a master class in "Why the Fuck Isn’t Everybody Already Listening to Colleen Green?” The lanky Green—bandleader and band namesake—rocked neon sunglasses, a ponytail, and an oversized green and purple shirt, reminding me somewhat of certain eighth grade classmates and thanking the audience for its applause after every song. The set drew heavily from the I Wanna Grow Up LP and consisted of pop rock so hummable that, for me, it quickly erased the dividing line between “casual fan” and “hardcore stan.”

Mannequin Pussy began in late 2009 as a collaboration between Marisita DaBeast and Athanasios Paul, two NYC-based childhood friends; she sang and played guitar, while he drummed. A lot has changed since I first interviewed DaBeast in 2011: Paul swapped his kit for a guitar, the lineup shifted several times, rough demos gave way to debut tape Gypsy Pervert, tour miles accrued, and Philadelphia became the band’s home. On record, the Mannequin Pussy sound consists of quick bursts of hurdy-gurdy noise punk. But in concert, the band—now expanded to a quartet—is a volcanic dynamo, bearing a closer resemblance to Bleach/Incesticide-era Nirvana; the tunes smash, grab, and exit in whiplash fashion, leaving a haze of feedback in their wake that’s still hovering by the time the next song explodes into being. To these unprotected ears—I neglected to bring plugs—it made for a visceral punk storm that blew by swiftly and violently, the din pulverizing DaBeast’s quilted-to-demonic vocals on personal favorites “Clue Juice” and “My Baby (Axe Nice)” and across the board.