The Eagles history tour was fantastic. 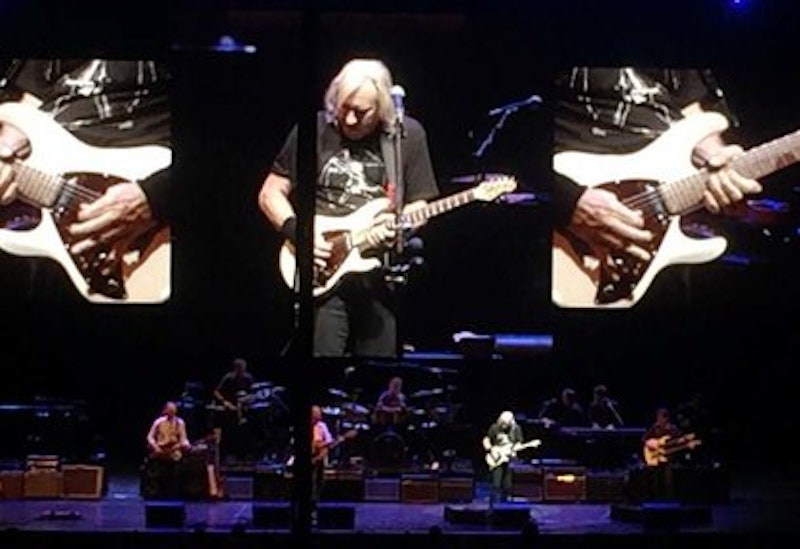 Colleagues at Splice Today, so many of them talented music writers, have politely declined to draw attention to my embarrassing passion for 1970s music. Whether it's my Air Supply obsession, that time I interviewed Don McLean, or my fan girl Billy Joel worship, let's just say my boss quietly narrows his eyes and retweets my music articles when they rarely arrive. He doesn’t ask when the next one is coming.

But a few weeks ago I saw The “History of the Eagles” tour and it was out of this world. Born in ’69, I grew up listening to them, whether on vinyl at home, or a car radio. As a kid, songs like “Best of My Love,” “Witchy Woman,” and “Peaceful Easy Feeling” would play in the summer on the radio at the swim club of the apartment complex where I grew up. I knew, and know, all the words by heart. To me, music is about nostalgia. It brings you back to a place and time, simple as that.

My husband I have summer birthdays and the tickets were our gifts to each other. We used to have a “Best of the Eagles” cassette driving around in his ’84 Mustang back in high school, so we’re both fans. Arriving to the concert at the packed Royal Farms Arena in Baltimore a few weeks ago, we skewed a little younger than most of the crowd, which was fine by me. The woman next to me asked if I liked the Eagles because my parents had, and I said sure, but so did I. She asked what song I hoped they’d play and I responded that although technically it was a solo hit for Joe Walsh so was unlikely they’d play it, “Life’s Been Good” had always been my favorite.

The three-hour-plus concert began, featuring historical facts, images, videos, and humorous accounts told by Glenn Frey and Don Henley and company, mostly in chronological order of the band's history. In fact, there’s an entire Wikipedia page if you want to learn more about the tour, which lasted over two years—a total of 142 concerts. Howard Cohen from Miami.com praised it, saying the harmonies were “pristine, soaring and spot-on—uncannily have remained as peerless as they were on the original recordings."

Only one sad moment came during the night: the introduction of the band classic "Take It to the Limit" with a sad nod to its corresponding missing Eagles original band member Randy Meisner, apparently riddled with mental illness and addiction issues. The band wished him well "wherever he is."

And then, it happened. I couldn’t believe it when I heard the unmistakable strains of Joe Walsh’s guitar playing the opening notes of “Life’s Been Good.”

“I have a mansion, forget the price/Ain’t never been there, they tell me it’s nice.”

To make the moment even more amazing, perhaps because one of the current guitarists for the Eagles, Steuart Smith, is from Baltimore, Walsh customized the best line: “I go to parties sometimes until four/it’s hard to leave when you can’t find the shore.”

Yes! The crowd went wild. Especially those of us from the Eastern Shore.

I don’t know where Walsh ranks on lists of greatest guitarists of all time in American history, but I can’t believe that even people who know a lot about music could sit and watch this 67-year-old guy play the guitar solo of “Hotel California” (my photo, above) during the encore and not think he’s one of the best guitarists of this generation. His spirit is so carefree and young. We listened to a Howard Stern interview with him on the way home from the concert—he’s a fascinating person and it's interesting to hear the living legend talk about his life as a rock star now that he is clean.

Everybody may be different, but the Eagles haven’t changed.