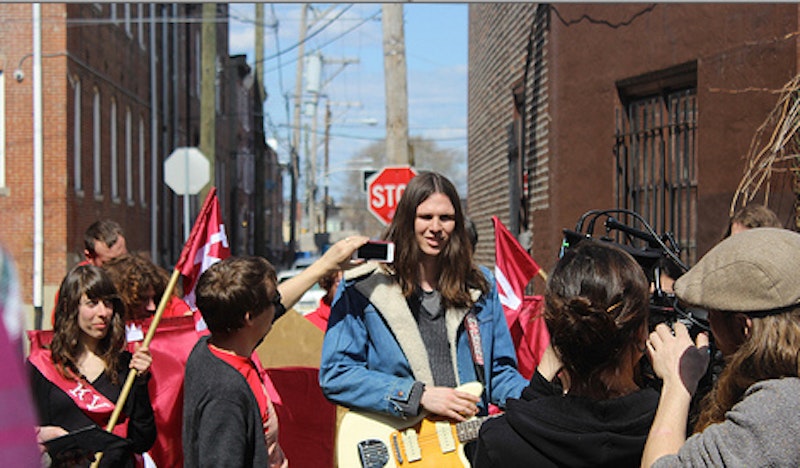 When listening to “Olde English,” it’s impossible to think about much of anything beyond “Olde English,” which sounds like a space shuttle’s afterburners incinerating your family or the psychic commotion that results when a brownstone full of hungover neurotics, awakened at dawn, are informed that they only have 10 minutes to vacate before a wrecking ball smashes into their home. Swedish twosome Heinz Hopf—whose Ids Inte (Vitrine) ​is one of this season’s more lively noise cassettes—erupt on every possible cylinder with this no-sinew-un-ruptured symphony of oblivion. Describing what they’re done ultimately feels as pointless as denying its sheer, absolute virility.

“Picture” is the sound of someone’s gray matter spraining, violently—a battle royale between the self as perceived in the moment and the self at whatever moment a selfie was committed to digital memory. It’s a lonely, claustrophobic song: the singer, Alicia Bognanno, locked in a self-imposed duress with that picture (a ghost?), a clock, angst, plus you, empathizing or gamely trying to. But the lyrics can be difficult to decipher—mea culpa, I had to Google them—so disinterest can be traded in for the skinned-knee pleasures of punk-pop groove if you need this to be overly superficial and just wanna headbang along and tune out whatever complexes are bedeviling you.

On “Pimpin,” Kurt Vile grapples with an identity crisis not too far removed from Bognanno’s, except that Vile staves off any encroaching panic to fire up his 16th bowl of the afternoon. Tough to say who the joke’s on here: the audience, for buying into the burnt hesher cartoon version of himself Vile loose sketches, or Vile, for giggling along with us? Meanwhile, those guitar lines are as tangled as the mane he purports not to comb, a quarter country—untamed Dinosaur Jr. lite—and there’s enough dickin’ with narrative perspective down the lyric sheet for us to know that he knows we know he’s no idiot. It’s as much a pop trap as gluing “pimpin” into the chorus; listen to this song once, you’ll repeat it a hundred times, as I have. But how honest is it, and how honest does it need to be?