A Millennial Stands Up For Fleetwood Mac

Slough off the disdain of Boomers and listen to Rumours. 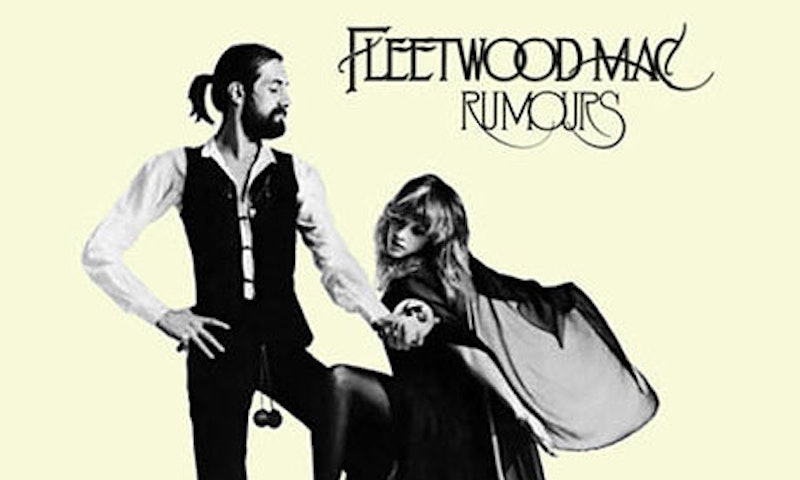 The greatness of Fleetwood Mac is not in dispute. Listen not to your Baby Boom elders who slogged and maybe suffered through the summers of the late-1970s when Rumours and Tusk owned the radio and filled arenas and stadiums. Their burden is great, having grown up in the late-60s when a chilly November could see the release of The White Album, Beggars Banquet, and Song Cycle all in the same week, and new heroes were on television and subverting a constricting culture based on conformity and shame right before your eyes. Everyone knows popular music since the 60s has existed in the shadow of it: everyone is influenced by the Beatles but no one will ever top them, so they say. I’m a Millennial, and finding our own musical heroes is tough in an era when few truly righteous bands or artists attain mass popularity and are able to headline arenas and make multi-million-dollar albums. That stuff’s reserved for pop lip-synchers, meme-generators, and porn stars these days.

Maybe that’s why the music of Fleetwood Mac is seeing such a strong surge in interest among the Millennials. A friend made a good point: “Don’t Stop” is embedded in the consciousness of 90s kids from the ’92 and ’96 Clinton campaigns, so the sound has been in our heads even if we didn’t know the material well. But stymied by dismissive dads who saw Fleetwood Mac as what the Ramones were fighting against, it’s taken until our early 20s to discover how amazing this band is. Brilliant popsmiths composing ecstatic, emotionally potent music with an extracurricular soap opera going on between members, and constant back and forth dialogues in the fucking songs. It’s fascinating to watch Stevie seethe when she sings Buckingham’s nasty riposte “Go Your Own Way,” or John McVie’s cringing during “You Make Loving Fun.” Speaking of which, check out this amazing performance of the Christine McVie song from 1977 here:

Everything about this song is glorious and ecstatic: the Gm-F-Eb chord structure and McVie’s rich, husky vocals are the sound of total trust and infatuation. Rumours might be the most optimistic record of all time. The sound is isn’t just reassuring, it’s victorious. It’s the sound of love bursting in every direction and the feeling you get in your gut sometimes thinking about your partner, your family, your friends, a deeply satisfying drip of oxytocin in your brain that reminds you of being in the womb. It’s every triumphant and peaceful experience you’ve ever had. Buckingham’s lead vocal around 3:48 is raucous and incredibly moving, delirious glee with this feeling of earthly satisfaction and incredible luck at getting this person into your life. This is just how I received “You Make Loving Fun” on first listen, unaware of Rumours as anything other than an album that sold really well, like an REO Speedwagon or Asia record. The ubiquity of those mid-late 70s albums in millions of kids’ homes in the 80s and 90s may have turned off as many as they turned on, but having been underexposed all my life, I only now understand how Rumours could be one the most popular albums ever: it’s the human ideal, mushy love, understanding, forgiveness. It transcends schmaltz into the heavens.
—Follow Nicky Smith on Twitter: @MUGGER1992