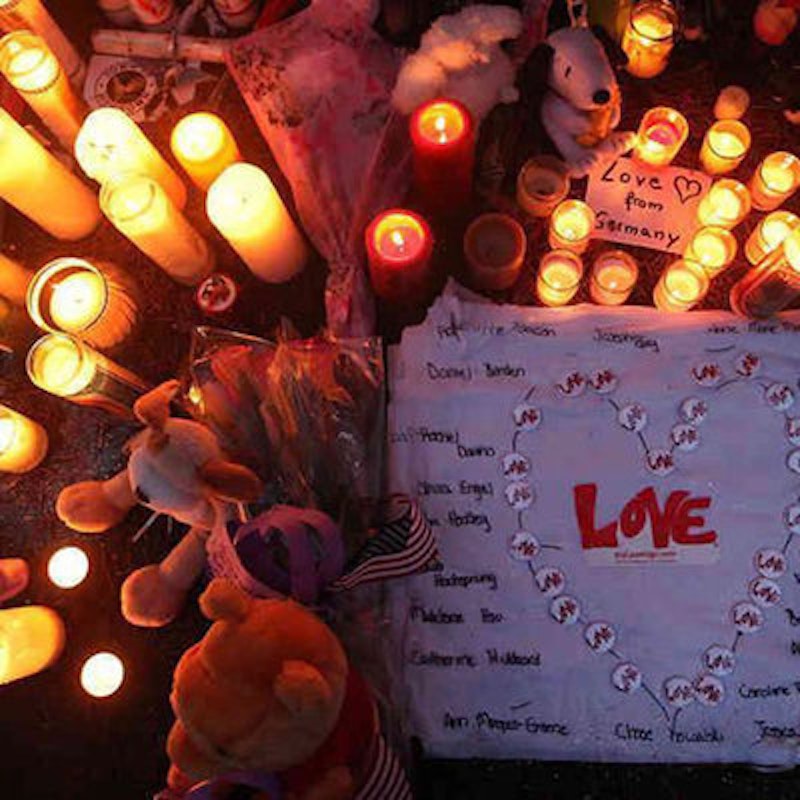 The modern national tragedy practically begs to be trivialized, monetized, co-opted, fed through a sort of societal meme machine: a flashpoint, some panic, the first tasteless jokes, then voila, we're beyond coping en masse—we're over it, on to the next. We helped build this world, so we have to live in it, and for that we'll pay a price exacted in one pound of flesh after another. (When was the last time you thought about Trayvon Martin or the Fort Hood massacre? Nah, me neither.) The trouble with collective amnesia is that we're perpetually stuck with the ephemera associated with milestones or disasters—"We Are The World," Mike Myers and Kanye West together at the post-Katrina Red Cross telethon, that robo-Obama version of "Call Me Maybe"—and we're constantly in the process of rediscovering that a diffident, lackadaisical approach to political, social, infrastructural, and technological progress has consequences beyond dead school kids and collapsing bridges and terrorist catastrophes and stammering interviews with shaken witnesses. People have to write songs about all of the shit that we allow happen because we don't have the collective will to prevent shit from happening.

"Aurora," of course, exists because some nutjob shot up a theater full of people who wanted to watch a Batman movie. It's kind of hard to listen to, because it's a choral panoply of layered voices that reminds one of football stadium-sized Roman Catholic churches and ghosts half-heartedly haunted mausoleums. The subtext is maybe that Dark Knight Rises composer Hans Zimmer wanted to pay some sort of tribute to the indomitable human spirit, our ability as a species to simultaneously mourn our dead but get on with the business of living. "Aurora" is powerful and indigo and chilling, but here's the thing: no-one listens to "Aurora" for kicks, and very few people either think about the impetus for the song or want to dwell on it too much. So the well-meaning efforts of the composer and the performers alike are essentially, beyond whatever proceeds of this dirge were donated to charity, wasted, relegated to a curio that nobody but Zimmer diehards and YouTube trollers will ever revisit.

R. Kelly, "I Know You Are Hurting"

"I Know You're Hurting" is a weirder animal: it's an R. Kelly tribute song to the slain Sandy Hook victims that R. Kelly barely even appears on. (Kells probably wrote it, but still.) He warbles some elongated "yeah-yeahs" early on, and murmurs and toasts quietly here and there, but this song, which is bizarrely lo-fi, lives and dies on string-section cheese and an especially soulful choir. The empathy on offer doubles as a weird triumph, and there's a high-five to the Almighty, and then "Hurting" cuts out before the listener has a true sense of what the song wants to be: it's the equivalent, to my ears, of weeping, mute, at a shrine to some mass slaughter, just taking in the candles and flowers and cards and aggrieved works of art, and other people standing around in a similar state, and a preacher wandering into the fray making small talk while hoisting a boombox blaring pop gospel.

The preacher is gearing up to say something meaningful, to explain to all assembled why God would let something like this happen to His own creations, but then he just books it, drops the boombox and wanders away and nobody ever sees him again. You leave the site vaguely empowered but confused as to what happened. Years later when recalling your experience of the aftermath of the tragedy you will remember none of that particular time and place, and neither will anyone else who was there.

Ire comes in all shapes and forms: one person's barroom brawl is another's cold shoulder is another's caps-lock Tumblr tirade. Sometimes, though, it feels good to just mortar together an impenetrable blare-bleep Wall of China so long and high that no degree of apologias, best intentions or indignation can possible penetrate it. You can read about the whys and wherefores behind the fount of indignation from whence "Hey Network Rail" came in detail when you click the link above, but suffice to say that a gender double standard is under protest here, and Veldon's no-bullshit version of "talk to the hand" is four-plus minutes of unblinking (mostly) tonal roar, with the slightest built-in quaver a noise equivalent perhaps to intense, throttling anger. In a way I'm reminded of how some television programs choose to obscure objectionable language. "Hey Network Rail” seems to ask, "But what if we censored the entire program? What if we castrated your entertainment? What if we drowned your whole perspective?" Other comparisons: an avant-garde iconoclast depressing a single organ key for the duration of a live set, the "red box" scene from Todd Solondz's Storytelling, a driver holding down a car horn while locking reddened eyes with a pedestrian no more than a few feet away, each daring the other to act, in a downtown intersection at midday, for an uncomfortably long period of time.