How The Knights of Sound became The Piece Kor. 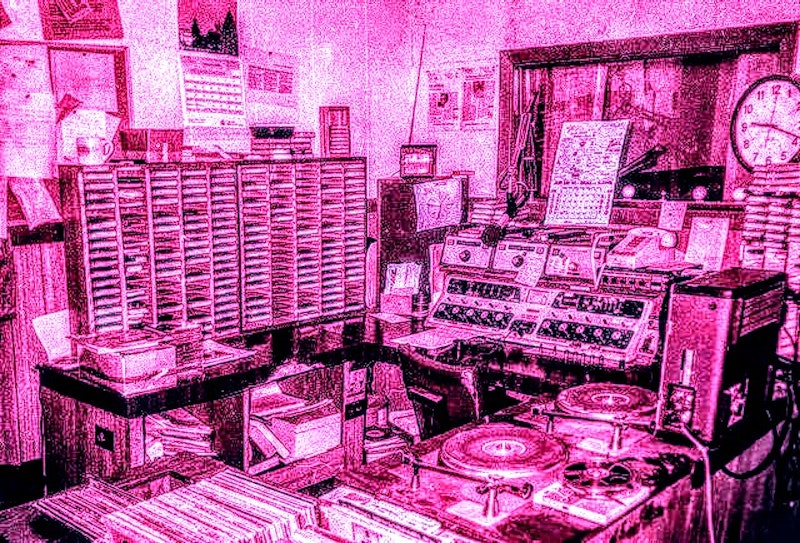 Charlie Clark married at a young age and his wife often tagged along whenever he had a gig. While attending a Knights Of Sound performance at a high school dance in Rising Sun, MD, Mrs. Clark made a grim discovery.

Charlie Clark: “My first wife went down to the rest room and there was a girl in there who had stitches in her neck from ear to ear… her boyfriend had tried to cut her throat!”

Covering the sketchy edges of rural Maryland’s teen scene helped the band to establish a large following throughout their region. They were regularly out-drawing more conventional Bel Air contemporaries like The Cavemen and The Black Watch with a bizarre high-energy stage show. Some of the most original elements included weird stage props and other theatrical touches—decorative lamps and home furnishings; no go-go cages or flood lights.

Charlie Clark: “We had a big high post for a bed—a headboard with ‘The Piece Kor’ written on it exactly the way it’s written on the band cards… we’d hang a pair of panties on it!”

With a backdrop that looked more like a goofy community theater production than a rock concert, the group sauntered on stage decked out in bold mod fashions; Barry Scott’s pin-striped three-piece mobster suit (with a gold watch and chain hanging from the vest pocket) would become a beloved trademark. Adding to the visual weirdness was singer Mick Ball’s confrontational performance style. The vocalist/harmonica player owned a 90- foot-long microphone cable. At several points throughout each set Ball would end up in the middle of the audience shaking and shimmying his hips suggestively, growling out hormonally-charged incantations that drove fans wild.

Charlie Clark: “We used to play a Knight Of Columbus Hall that had a capacity of 90 to 100 people or something, and we used to charge a dollar a head and self-promote it and make $150, $175 a night… People would be waiting in the parking lot to come in and they’d have to usher so many people out and let so many people in… we were stacked up on chairs back there playing. There wasn’t a stage or anything.”

The Knights’ local popularity began to crest just as they caught the attention of Clark’s music biz pal Ray Scott. As the owner and main promoter for Bel Air’s Woodside Ballroom, Scott worked with many pro-level artists, mainly wedding bands and nationally-known acts; raw rock groups like The Knights Of Sound weren’t his forte. After witnessing one of their typically blistering gigs at a teen center Scott took a chance and gave them a night at The Woodside. The gig was a sellout/standing room only event, so when Clark and co. asked Scott to work as their manager he was more than happy to help.

The origin of The Piece Kor name is murky. One thing is certain: the name change came in 1967 soon after The Knights Of Sound made their first recording—a 7” vinyl demo cut at the studio of Bel Air radio station WVOB-AM. The record featured two Jack Bandoni compositions, and it was pressed up in a microscopic quantity by Delaware based vanity label Airtone Records. These discs were distributed for free only as promo items to radio stations, nightclubs, and promoters (whether or not the record got any airplay is unclear). The two songs on the single were “Stay Out Of My Life” and “The Pit.” “Stay Out Of My Life” is a charging garage rocker with harsh trebly guitar, but it’s not as punked-out as the title implies; “The Pit” is everything its title suggests. This morose garage rock ballad is a showcase for Mick Ball’s doom-laden vocals. Both songs maintain a cryptic atmosphere thanks to the crushed AM radio fidelity. With a set-up that sounds like one reverberating mic recording an entire band, you feel like you’re hearing a bunch of nervous teens moaning away at the bottom of a well.

Jack Bandoni: “Actually, ‘The Pit’ and ‘Stay Out Of My Life’ I wrote before I met anybody in The Piece Kor… I got moved from [New England] to Maryland and had to break up with a girl and felt like I was in a pit. Then I found out she was dating one of my best friends so I said to myself, ‘Anybody that’s gonna pull that, stay out of my life!’“