How it all went wrong. 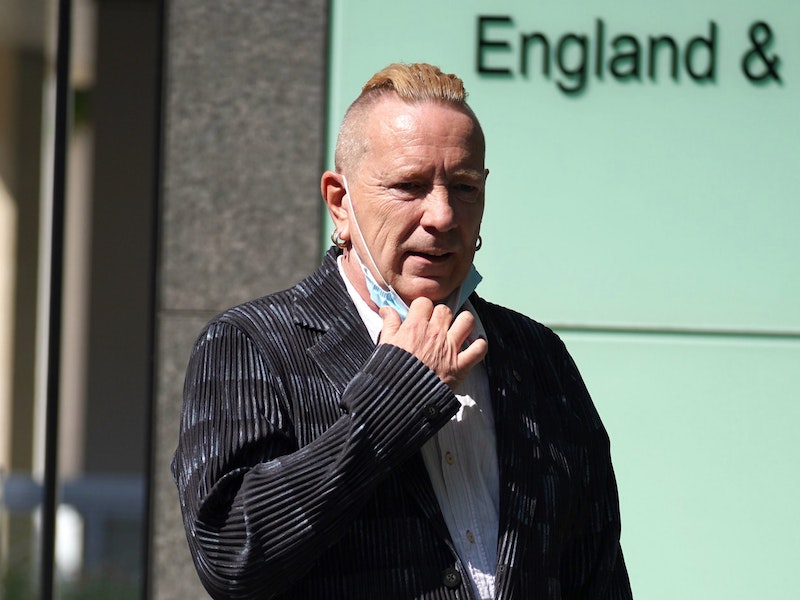 On August 23rd, ex-Sex Pistols’ front man John Lydon, aka Johnny Rotten, lost a court case against two of his fellow band members, Paul Cook and Steve Jones, about the use of their material in the forthcoming Disney miniseries, directed by Danny Boyle.

Read that sentence again. In less than 50 words I’ve managed to sum up all that’s gone wrong with the British punk scene. As if punks using the courts to settle disputes amongst themselves is not enough, it’s over a miniseries being paid for by the Disney Company.

Lydon’s been going downhill for a long time now. In 2004 he appeared in the reality TV series I'm a Celebrity...Get Me Out of Here! in which generally minor and failed celebrities compete with each other to eat Kangaroo’s testicles and the like, while isolated in the Australian jungle. In one live broadcast he referred to the show’s viewers as “fucking cunts,” showing that he still had the capacity to shock. It was a cheap stunt, probably planned months in advance, which helped to revive his flagging career as a professional controversialist.

In 2008 he took part in a TV advertising campaign for Country Life butter, dressed in the kind of clothes that are usually reserved for the squirearchy, the British landowning elite. Was this meant ironically? It’s hard to say. The campaign was a great success and earned Lydon enough money to restart his post-punk band, Public Image Limited.

In 2012 he appeared on an episode of Question Time, a long-running BBC current affairs program, in which members of the public ask questions of a panel of guest speakers and politicians. He came over as embarrassing, self-promoting, loud, pointlessly argumentative, frequently talking over other guests, and expressing attitudes which would certainly have upset his former self.

In 2018 he was photographed wearing a MAGA t-shirt, and in 2020 said that he was planning to vote for Trump. (He became a US citizen in 2013.) He told the BBC’s Newsday: “Yes, of course, I'm voting for Trump. I don't want a politician running this world anymore.” In November that year he was interviewed for Good Morning Britain, saying that his support for Trump was meant as a rejection of “intellectual, left-wing ideas.” Many viewers were puzzled as to why the political views of an ex-pop singer, now living in the USA, would be of interest to them.

It hadn’t always been this way. The Sex Pistols are regarded by some as one of the most important bands ever. They came out of the London pub rock scene of the mid-1970s. Influenced by the pared-back aggression of such bands as Dr Feelgood, and the style and stage-posturing of Ian Dury, as well as by the burgeoning New York scene, they brought a new attitude to rock, at that time burdened with an overweening sense of self-importance. Prog rock and pomposity was the order of the day, with long, technical guitar solos and pretentious lyrics wedded to overblown orchestral arrangements and classical themes, in the style of The Moody Blues.

The Sex Pistols blew all that away. They were loud, aggressive, in-your-face and thrillingly raw. The songs were at once concise and musical, with a political edge. Anarchy in the UK, with its descending power chords, and Lydon’s demonic laugh at the beginning, marks a turning point in British rock. It hit the 70s music scene like a slap in the face to the industry. It woke everyone up.

There followed months of controversy, with the nation firmly divided. The band appeared on an early evening TV programme and, with encouragement from the interviewer, began swearing on live TV. It caused a storm. Later, with the release of God Save the Queen, timed to coincide with Queen Elizabeth II’s silver jubilee, they gained even more notoriety. The song was banned by the BBC, workers at the pressing plant downed tools over the record’s contents, while the plate makers, tasked with producing the famous cover, had to be persuaded to finish the job. There were protests at their gigs and members of the band were physically attacked. The young loved them, the old hated them. They were riding the zeitgeist like surfers on a tidal wave come to bring vengeance on the old regime.

It didn’t last. They sacked bassist Glen Matlock, one of the band’s premier songwriters, in 1977, and replaced him with Lydon’s old friend Simon John Ritchie, known as Sid Vicious, who couldn’t play an instrument. The ostensible reason for Matlock’s removal is that he liked the Beatles, a crime against music in Lydon’s eyes. It left the band bereft of its former cohesion. Vicious was chosen for his looks and attitude. Pale, skinny, spiky-haired, with a permanent sneer, he looked the part, but exposure to the rock ‘n’ roll lifestyle went to his head and he soon found himself in a self-destructive relationship with heroin addict Nancy Spungen, which eventually lead to his premature death. That story is well told in Alex Cox’ Sid and Nancy (1986) in which Vicious is enthusiastically portrayed by Gary Oldman.

Matlock later claimed that the tensions between himself and Lydon were deliberately exacerbated by their manager, Malcolm McLaren, as a way of creating chaos in the ranks in order to stimulate creativity. McLaren saw the band as a Situationist art project rather than as a rock group. He had observed the Paris uprisings in May 1968 and was attempting to bring about his own rock ‘n’ roll insurrection, using the Sex Pistols as his means. He succeeded. Punk became a brand as more and more young people throughout the British Isles adopted its style and attitude. We were soon in the throes of a full-scale punk revolution, with punk combos cropping up in every corner of the land, with punk style and punk haircuts usurping the earlier hippie look. Long hair gave way to spiky hair, great coats to leather jackets, flares to straights.

What McLaren failed to recognize was that the Sex Pistols were a formidable band in their own right: tight, energetic, with a fierce rhythm section, they could carry themselves before any audience. Also, the country was ready for the change. The punk revolution didn’t spring into life because of the machinations of one Svengali-like manager on the King’s Road, as McLaren liked to portray it, but because there was a weariness in the heart of the nation, and we were all looking for something new.

The word “punk,” by the way, has an interesting history. It originally referred to rotten wood dust used for tinder. Later it came to mean any worthless thing, later again, to a worthless person. It can also mean a male prostitute, or, in prison slang, someone forced into sex by a stronger partner. It was used in relationship to music first to define rockabilly, then adopted to describe certain characteristically aggressive bands, such as the MC5 and the Stooges, coming out of Detroit. It was that raw, fast, unadorned style that British punks chose to emulate.

The Sex Pistols were no sooner here than they were gone. They were on the scene for a total of two-and-a-half years, and, looking back, it was mostly nonsense. Lydon’s lyrics, for example. In “Anarchy in the UK” he gives examples of what anarchy means to him: “give a wrong time, stop a traffic line,” and “get pissed, destroy,” he sings in his howling voice. This isn’t really anarchy, it’s juvenile delinquency, petty vandalism, and nihilism. Also, while they derided the hippies as “boring old farts,” they were living off the back of what the hippies had achieved previously, living in squatted properties, and playing in pubs which had been commandeered for the London pub rock scene, of which they were only the latest incarnation.

This is why Lydon’s latest noisy intervention into our collective consciousness is so irritating. Steve Jones called Lydon an “annoying little brat” in his 2016 autobiography, Lonely Boy: Tales from a Sex Pistol, on which the Disney series is based. That just about sums it up. Lydon called the series “disrespectful,” which shows a lack of self-awareness. Since when has Lydon shown any respect for anyone but himself?