Sorkin’s Newsroom Is All Easy Answers

It feels good to be right, especially when you don’t have to work for it. 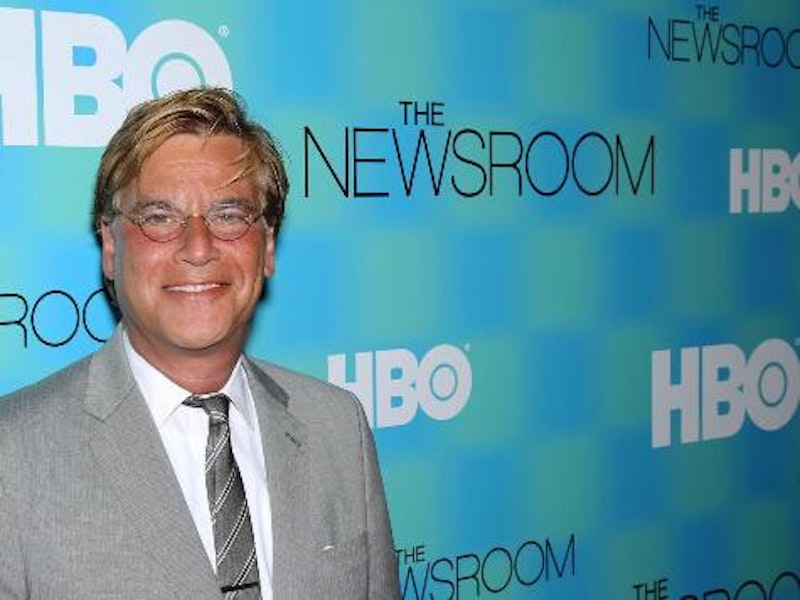 How good is The Newsroom? Depends what you mean by good. Maybe the worst thing about Aaron Sorkin, the show’s writer and auteur, is that he gives us a reason to use the disgusting phrase “guilty pleasure.” His work is brainy but vapid, and he draws from a bag of tricks that are surefire but endlessly repeated. Worst of all, he’s smug. Of course, being smug is a blast when you can get away with it, and part of Sorkin’s stock in trade is to give us that chance.

The Newsroom is no exception. Its shtick is to demonstrate how landmark breaking news stories (for example, the BP oil spill) could’ve been covered if only newsrooms had two years’ hindsight and a scriptwriter who churns out zingers. The trick works, but what a way to be entertained. To enjoy the fun you have to admit that your soul is not quite as big as you might like. In fact it has to be just the right size to enjoy seeing characters floor each other with trivial facts. In the show’s first episode, the Gulf of Mexico’s liquid volume and the year Man of La Mancha was written both get sprung on the unwitting.

The show centers on a self-absorbed, mean-tempered cable newscaster (Jeff Daniels) who suffers a mini-breakdown during a college forum. The breakdown takes the form of a Sorkin speech on America’s low standing in the world vis á vis math scores and so on, plus a wind-up about our past greatness and how we can get it back. Oddly, the greatness has nothing to do with math scores, just a general nobility of character that, we’re told, used to pervade America’s public life.

The newscaster is prompted into his flight by a mysterious woman in the audience who writes out cues for him and holds them up. (“Not greatest country, can be again” or words to that effect.) The pilot episode’s climactic twist is that she’s his ex-girlfriend and ex-producer (Emily Mortimer). She’s been off hunting news in Iraq and Afghanistan, but once on U.S. soil she rushed to a public appearance by her ex so that, unasked, she could guide his remarks.

Apparently she goes everywhere with a Magic Marker and an oversized pad of blank, unlined paper. She had them at the college forum, and she's got them in the suitcase she lugged from the airport to Jeff Daniels’ newsroom. It’s the damnedest thing. Sorkin figures that feeding lines to somebody else is such a basic activity that people always carry equipment for the job.

Emily Mortimer is at Jeff Daniels’ newsroom because his boss (Sam Waterston) has decided to shake him into greatness by rehiring her. She brings along a sloppy-haired young protégé (John Gallagher Jr.) who turns out to have a college roommate who’s high up at BP and a big sister who’s high up at Halliburton. They phone him with the tips that bust the story wide open while CNN, Fox, The New York Times and other real-world losers stumble about. There are also a stammering blonde girl (Alison Pill) and a young man with a face like cream cheese (Thomas Sadoski) who work for the newscaster and who will obviously form a triangle with the protégé.

But all right, the show is fun. Sorkin is a master of golden gimmicks, most of which come down to the momentary fakeout. Momentary because his scenes and plots don’t wind up anywhere surprising. Instead it’s a matter of sentences. A character asks a point-blank question, the other character reverts to some half-important factoid that was planted a few minutes before. And so on. They work, and so does the air of white-collar frenzy that his characters give off. His people are always very busy, busy as the flashing lights and ringing phones that tend to surround them. That they can choke out their stop-and-start, phrase-heavy sentences, each one a treasury of bulls-eye verbal gems and a bomb site of syntactical dilapidation, merely demonstrates how good they are at what they do, whatever that happens to be.

In Newsroom, naturally, they gather and relay news. But they also redeem America’s soul. Doing so is just a matter of squaring the chin and marching forward. “About 10 minutes ago, we did news well,” says the Waterston character. “Why? Because we just decided to.” His attitude these days? To hell with ratings! After all, it’s not like he’s running a business. But all of this is a shuck. It’s not like exposing BP and Halliburton would be bad for ratings. The other news shows didn’t do it because they didn’t have Aaron Sorkin phoning in answers from the year 2012.

A final note. The Emily Mortimer character is supposed to be well past 30. She’s also supposed to be an American citizen, the reason being that she was born here while her father was British ambassador to the United Nations. More specifically, he was Margaret Thatcher’s ambassador. But that means the Mortimer character could, at the very most, be 30 going on 31. The reason is that Newsroom’s first episode is set in April 2010 and Thatcher became prime minister in May 1979. Excuse me. I wouldn’t have brought it up except for the business about Man of La Mancha and the Gulf of Mexico.