Nostalgia, legend and history on UHF. 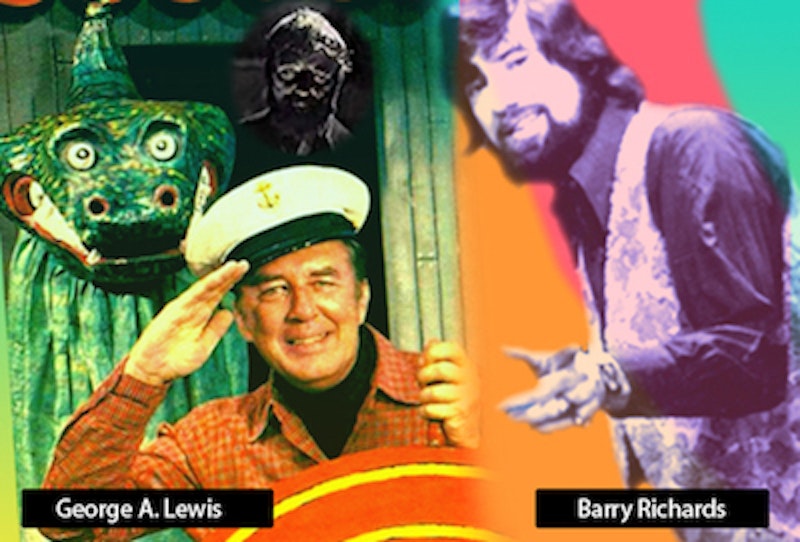 During the 1970s in Baltimore, a fair part of my youth was spent watching television. There were three major networks ABC, NBC and CBS. If you were bored with the traditional shows, which happened a lot, you dialed the above 13 channels and entered the “ultra-high frequency zone.” The UHF experience was a chance to explore pop culture outside the mainstream landscape—a forum for religious televangelists, cheesy infomercials and other surprises.

Many local television personalities inhabited the world of UHF, and two of my favorites were George A. Lewis as Captain Chesapeake and Barry Richards, host of Turn On. Both were positioned on opposite sides of the spectrum. But together they produced some mesmerizing television shows, each with distinct style and substance.

A typical Captain Chesapeake late-afternoon ritual starts with laughter and voices filling a room. A group of elementary schoolmates scramble for seats in front of a Zenith black and white television. After the defiant behavior calms down, one lucky person gets finger-pointed into fixing the TV’s fuzzy reception by repositioning the aluminum foil flags on the antennas. There’re moments of silence before a familiar “Ahhhoooy crew members!” greeting. In unison, all the kids in the room pricked up their ears.

The enduring Captain Chesapeake role was George A. Lewis at his finest. The show aired from 1971 until 1990 on WBFF channel 45. It was the second longest running children’s show in Baltimore television history. Pinbusters rolled a strike in lane one.

Lewis, an Atlanta native, embraced Baltimore as his home. To kids, he was a gracious storyteller, whose show started the show with a poem: “A shipwrecked sailor found himself in a plight. Lost at sea he was really a sight. He swam and swam ‘til he thought he’d die, when a wondrous sight appeared to his eye. A derelict boat that saved his life and put an end to his watery strife.”

An unpretentious Chesapeake Bay tugboat set framed the Caption’s crew. The cast included a sea monster puppet named Mondy, pronounced Moan-dee named after Lewis’ daughter Remonda. Positioning the towlines starboard at a 90° angle was Little Mo’, Missy the Mermaid and Bruce the Bird. They helped guide the tug while crewmembers watched The Three Stooges, The Little Rascals and Speed Racer shorts. The family show’s agenda, “Be somebody important; be yourself.”

However, stars can’t shine bright without darkness. Lewis played a duel role on channel 45 every Saturday transforming into the ghoulish host of Ghost Host Theatre. There was a coterie of late night horror show hosts working the graveyard shifts across the US that specialized in showing low-budget horror and science fiction B movies: Los Angeles’ Vampira, Detroit’s Sir Graves Ghastly and Washington, DC’s Count Gore.

The Ghost Host Theatre’s introduction had a static painting of a haunted mansion totally covered in moving white dots; you couldn’t tell if it was raining or snowing. A lone wolf howls, then a slow drawl announces, “Gooood Evening. This is your Ghost Host inviting you to watch if you dare!”

During the show’s commercial breaks, a dark figure walked across a fake graveyard set, complete with John Scare-A-Deen and Frank E. Stein cardboard tombstones. The show repeated the same opening footage every week with new dialogue added in. Lewis retired in 1990 and died on December 18, 2000.

Youth’s eternal sense of freedom works at light speed, so by the time I was a teenager, things changed. Rock ‘n’ roll was entering the mainstream. The devil’s music was quickly adopted and Barry Richards’ hand delivered it to your door. Please come in, don’t tell mom.

A typical scene on any given Baltimore night involved high school males with long greasy hair, staging kitchen raids looking for Goetz’s caramels and Bergers fudge cookies. After a massive face stuffing, the red-eyed teens plop down to watch some television.

Turn On was on, broadcasting from Washington DC’s Channel 20. Host Barry Richards is often described as the creator of live “free-form” television. A balance of spirit and passion combined with a devotion to music had this “The Boss with the Hot Sauce” pull out all the stops.

Always sporting groovy attire, like a Nehru jacket and bell-bottoms, Turn On was live rock ‘n’ roll, extra strong and extra raw, which was the point. With a long career as a progressive radio DJ, Richards brought some of the biggest names in rock music to the Baltimore-Washington area during the 1970s.

Back to the late night TV party with those high school teens, now in a dazed sugar coma—get ready to be blown away boys. Barry Richards introduces the original Alice Cooper Group. Young skinny Alice saunters around on stage in full eye make-up and glitter pants.

The group drop kicks a loud, hard pounding E minor guitar riff. Alice swishes around a bit before ripping into a blistering harmonica. Growling into the microphone, he pants, “Lines form on my face and hands,” performing the teen nail-biting anthem “I’m Eighteen.”

During a much different time on television, Richards made up his own rules presenting this kind of electrifying live music with a bold blend of guest performances. Good golly, seeing Little Richard hang out and rap with Barry while sitting on a swing set is priceless. Turn On presented a tremendous amount of versatility, with many R&B and soul performers. Segments featured the talents of Muddy Waters, Fats Domino backed by the Byrds and Humble Pie with Steve Marriott.

I couldn’t believe it when I heard the rarely-seen studio tapes of these performances survived and they do justice to the show. Richards has them on his website, Turn-On, Groove-In, Rock Out! The Barry Richards TV Collection. Barry Richards keeps on rolling, lives in Los Angeles and continues to have a major presence in the music industry.

Is it nostalgia, legend or history? Call it all three. So even if you’re not a kids show or rock fan, please pardon my senior moment with the willies remembering a few things: Rock music will never be mainstream again. It’ll be a sad day when Mick gets his satisfaction. Nostalgia catches fading dreams and floods your consciousness with the past. The contributions from trailblazers George A. Lewis and Barry Richards helped shape the history of television.