When Great Actors Settle for Roles in Crummy Movies

Walken, Pacino & Arkin are wasted in the amateurish Stand Up Guys. 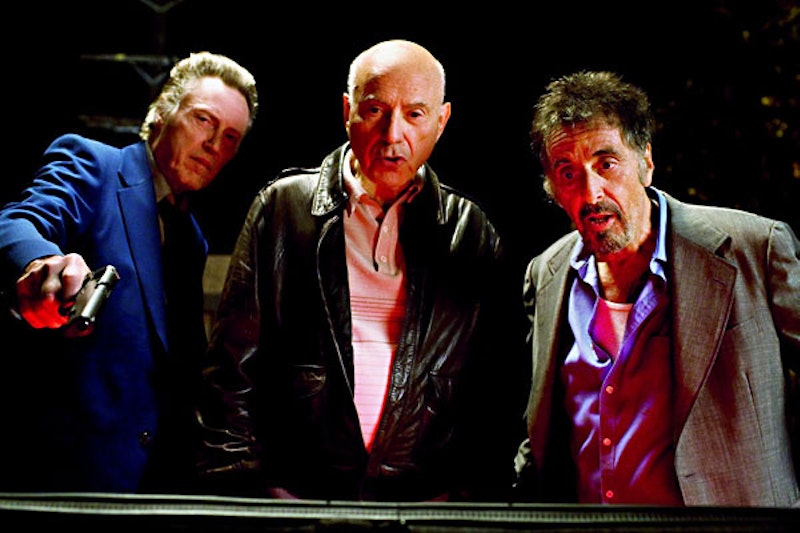 Imagine this as a hell: you’re a successful film actor, with decades of quality work under your belt, and well into your golden years you keep making movies. Sure, you start playing a lot of dying and ailing old men, men who take 45 pills a day, scuttle about, and impart wisdom to every young person who comes across. Your impending death or dementia might even be the crux of the movie. It can be a noble way to end your arc, and you might even get a token Oscar (Christopher Plummer in Beginners. He was 82, gay, and had cancer). You’d think after 50 years working in Hollywood guys like Christopher Walken, Al Pacino, and Alan Arkin would know a good script from a shitty one, or at least their agents would. Their latest film, Stand Up Guys, is very confusing. It’s a malnourished, underdeveloped undergrad kind of project, a movie that feels like a poorly executed and dispassionate writing exercise than a movie starring three of the most revered elder American actors still working today.

It’s a great set-up, though: Walken’s best friend is Pacino, and he’s getting out of jail after 28 years. Walken has an impossible choice: kill Pacino to fulfill a crusty mobster’s decades-old hit, or have him and his granddaughter get taken out themselves. Pacino knows full well what Walken has been ordered to do, so they spend one last day together: going to whorehouses, stealing cars, eating multiple steaks, picking up Arkin from a nursing home and get chased by the police, bury Arkin after he’s had a heart attack in a stolen car, somehow get his grown daughter’s blessing, buy some clothes, then eventually go on what looks like a suicide mission into this awful mobster’s compound.

The movie ends on a confusing, half-baked note: the whole time we’re led to believe Walken will shoot Pacino in the head at 10 a.m. sharp. Of course that won’t happen—the syrupy sentimentality won’t let it happen. The movie ends literally mid-shoot-out, we don’t see the mobster die, and the way the thing is shot and edited honestly make it look like a bad car commercial. I don’t know how anyone could describe this brick of a script as “Mamet-esque” (which my dad did).

So, maybe a bad script isn’t confusing. What makes zero sense is why these three would step foot anywhere near this picture. Like, I know Burt Reynolds has a fucked reputation and has to star in parody-parody-parody fecal dreck like Not Another Not Another Movie, and somehow the mole people that made Movie 43 convinced all the Oscar winners in it that it was a good idea, but Walken, Pacino, and Arkin are arguably still at the top of their game. Walken’s role as a cellist losing touch via Parkinson’s in A Late Quartet last year was brilliant and haunting, and Arkin continues to have great taste in scripts even in his post-Little Miss Sunshine haze (see The Thin Ice, an excellent dark comedy starring Greg Kinnear that went unnoticed last year). Even so, I can’t say Stand Up Guys is laughably bad or interminable. The film is actually emotionally on point, and you feel the quiet desperation of two men past their prime, both very close to death. It’s just a shame the script sounds like something a 14-year-old might write after seeing Reservoir Dogs for the first time.