Give Netflix Half a Hurrah for House of Cards

A numbed- and dumbed-down audience “binges” on the show. 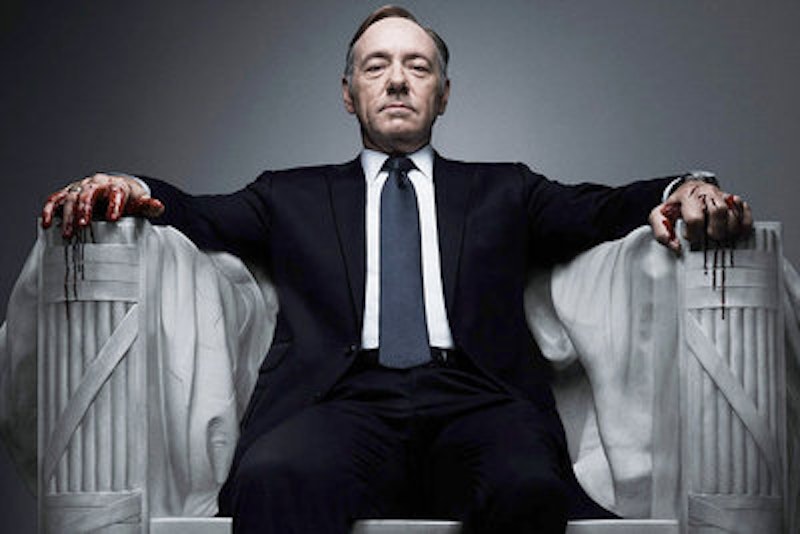 When I last wrote about House of Cards, Netflix had just released the first official trailer for the show and announced that all 13 episodes would be available for streaming all at once, a move that HoC showrunner Beau Willimon boldly proclaimed would be the "future of TV in five years." Now that season one is online, critics agree that HoC joins the ranks of the best TV shows, at least in style, and why not, with superb performances from Kevin Spacey and Robin Wright, and artful direction from David Fincher (among others).

A number of critics have admitted to "binging." Over at Huffington Post, Frazier Moore writes: "I proved incapable of saving some for later, devouring all 13 hour-long episodes over the weekend. Then I licked the bowl." Kelly Faircloth of BetaBeat followed up: "I didn’t expect I’d stretch the show out over the next 13 weeks, like I was watching Dallas circa 1982. But I also wasn’t planning to find myself awake at 2 a.m. last night, polishing off the last episode and frantically googling 'house of cards season 2 please oh please tell me it’s coming soon.'"

Why so many critics equate watching all 13 episodes in a day or two to a kind of sad girl, ate-a-whole-gallon-of-Haagen-Dazs weakness I'm really not sure. Netflix hasn't released any official stats on viewership but weekend traffic analytics from Procera, a traffic management and tracking company, found that 11 percent of Netflix subscribers had watched at least one episode, and that roughly 1/3 of all HoC fans had finished up season one within a day or so of its release. I don't particularly have any problems with this, and I doubt we'd judge anyone who spent a whole Saturday watching a season (or more) of Lost or Breaking Bad or Friday Night Lights, or any number of other TV shows that are already available on Netflix.

The show itself isn't particularly amazing. Yes, watching Kevin Spacey manipulate everyone around him (and address the camera directly to describe his Iago-like ploys) is a lot of fun, but for all that's been made about the revolutionary release of a whole season at once, the show itself is the same old dirty politics that we've seen in a hundred different movies and TV shows. Blame Watergate and Iran-Contra and the Lewinsky affair and 24-hour "news" stations that sensationalize everything that can be sensationalized and I guess you can come to some rough understanding of why Americans love watching anything rife with corruption and political scandal. Spacey delivers his lines with characteristic charm, but even he can't turn bad writing into good, and here's he given altogether too much bad writing. Unlike some critics and commenters, I actually like the direct-to-camera address. I'm just not a huge fan of lines like, "I love that woman. I love her more than sharks love blood." I'm not saying this isn't quality TV, and worth watching, I just wish Willimon & co. had toned down some of the folksy, good ol' boy slang.

Still, as Faircloth pointed out, maybe HoC is set to lower standards:

House of Cards doesn’t have to be the most brilliant thing you’ve ever seen. It’s just got to be good enough to keep you clicking, then leave you wanting more... If I hadn’t crammed the whole show into just 72 hours... it might have gotten laughable real quick.