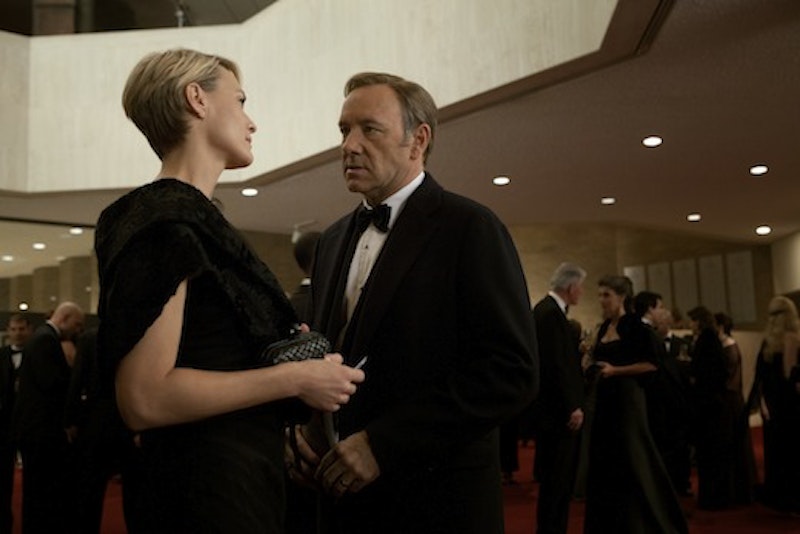 “Who never dreamed that he would finish as... chitlins.” That's a freehand version of what Kevin Spacey says to the camera when gloating over an enemy's fate in House of Cards. It's not much of a line. Watch the first episode of the Netflix House of Cards and you'll run into a few would-be corkers of this sort: “Give and take. Welcome to Washington.” And “Tough as a two-dollar steak.” And “Check, check, check,” a flourish meant to liven up the description of the two-dollar steak person, a Latina who is the new president's chief of staff.

The writing is weak, and this shows up when Spacey breaks the fourth wall to confide something devilish to us, the viewers. He's a scheming monster of a politician out to pull down a government because he's been shorted when it comes to winning high office. Same premise as in the original series, produced in Britain 23 years ago. The to-the-camera bits were a highlight of the old series, and are meant to be a highlight of the American version. That's a sad effect: the highlight that isn't. The new House of Cards is full of them.

Something we must be clear about. The old House of Cards was not a great series. But it was solid and it worked. You could watch it and have fun. A quarter of a century later it's still doing business, now in the form of Internet streaming. Netflix took note that the series was in demand, and that the customers demanding it also streamed movies directed by David Fincher and movies starring Kevin Spacey. But the customers didn't signal any preferences as to who wrote their viewing. So when Netflix assembled its creative package, the company could line up a star, director and vehicle just by following the numbers.

A writer was something else. Viewers don't care about writers, except for Aaron Sorkin, who's busy. So Netflix roped in Beau Willimon, the man who wrote the screenplay for a George Clooney movie called The Ides of March. That was about politics, so close enough. Judging by the first episode, he did a flat-footed job. The dialogue is flat and the premise is weak. The anti-hero of the British series, Francis Urquhart, was an aristocrat thwarted by political circumstance, namely the rise of middle-class democracy. He figured he deserved to be in charge, and as a member of the old ruling class he was ruthless enough to put his will across.

His American counterpart, Francis Underwood, is by comparison a social blank. We know he's from South Carolina, and Spacey plays him with a Southern accent. We know he grew up poor and likes spare ribs. So far that's it. I predict they’re going to make him gay, just to thicken things up. That still won't locate the character. A thwarted aristocrat is a man with a motive, one that (in Britain) plays into a powerful stereotype. A gay Southerner may be a bit pissed off, but possibly he might see a therapist and work with his problems a little. Overthrow a president? No, that seems a bit extreme.

Spacey looks like a Basset hound that has had a lot of work done: an ear-lop and a really thoroughgoing facial tuck. Or he looks like a shoe. He could still put something across: a little slug like Bobby Darin managed, and so did Spacey when he played Darin. But this time, no. He did all right filling his space in a long 56 minutes of exposition and drama preliminaries. Maybe the series dealt him a bad hand, so to speak.

David Fincher, the director, did his usual backlit furniture-and-shadow scapes. Without a good script his style very quickly starts looking like nothing but a style, like a trick anybody can do. Somebody was doing a catalog shoot in the school of David Fincher and somehow this became the show's footage—that's the impression.

Robin Wright, as Mrs. Underwood, has a calf that could gouge open a dinner roll. The young girl role is played by Kate Mara. I wondered if she was her sister, then found out there's two of them. I think their looks fit them for a particular slot: the chick who's supposed to be looked at by men without signaling hotness in the usual ways. People always talk about “not conventionally pretty.” Eventually they have to wonder what they mean by that, and then the Mara sisters come to mind.