What If Superheroes Were Reactionary Dullards?

The new Disney+ series has a very narrow idea of infinite possibilities. 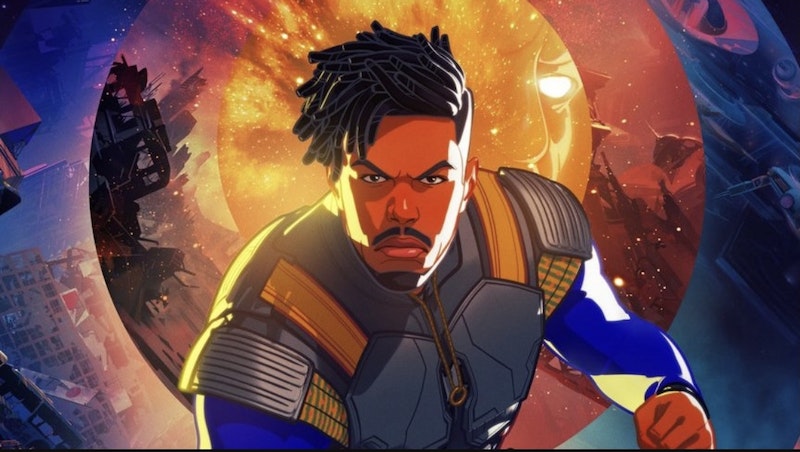 “Enter the multiverse of infinite possibilities!” the trailer for the Marvel Cinematic Universe’s animated Disney+ series What If…? enthusiastically declares. But with six of the nine slated episodes released, it’s clear that the possibilities may be infinite, but they aren’t very adventurous. What If…? imagines heroes with slightly different powers punching slightly different people through slightly different walls. But the nature of the genre remains largely untouched by the titular question mark. Good is the status quo, evil threatens it, and you defend the first by blasting the hell out of the second. Even the Marvel Zombies riff tamps down the bleak gruesome glee of the comics (no Hulk biting off the Silver Surfer’s head in this version).

The first two episodes suggest the strict limits on all that limitless imagination. The first asks what if Peggy Carter became Captain America instead of Steve Rogers. The second asks what if T’Challa became Star Lord instead of Peter Quill. Both are in part about displacing white men from the center of the Marvel Universe, and that does result in some important changes. Peggy defies military patriarchy as she rushes off tothump the Red Skull, while T’Challa’s Afrofuturist optimism is a more effective universe-saving tool than Peter Quill’s egocentric narcissism.

The two episodes function as a critique of the MCU’s sexism and racism in casting. But they’re cautious about broader ideological engagement. Peggy is British, but the show is still heavy on the celebration of the American military machine. It’s also carefully coy about the content of its anti-fascism, as Carter fights the not-quite-Nazi secret society Hydra, obviating any need to discuss or think about anti-Semitism or fascist racism. T’Challa is figured as a unifying, Obama figure in a post-racial galaxy. The issues of global white supremacist imperialism raised in the MCU film Black Panther are carefully avoided.

They’re sidestepped more noticeably in episode six, "What If... Killmonger Rescued Tony Stark?" In Black Panther, Killmonger is an ambivalent figure. He’s supposed to be the villain because he tries to conquer the advanced hidden African nation of Wakanda and destroy the hero Black Panther. But his call for global Black revolution resonates.  Killmonger argues Wakanda should reveal itself, violently overthrow global white supremacy, and free Black people worldwide. He thinks superpowers should fight for rather than against disruption. That’s a very different vision of superheroing than the standard MCU approach, and led many fans to argue that “Killmonger was right.”

Black Panther made “Killmonger” the villain but ended up endorsing a compromise of reformist charitable work rather than revolution. The “What If…?” episode pulls back even from that half-measure. In the shorter half-hour timeframe of the show, Killmonger doesn’t have any space to explain his motivations or make the case against Black oppression. He becomes a much more standard-issue criminal mastermind, whose machinations are indistinguishable from a quest for personal power. In addition, his main enemy in the show is multimillionaire arms dealer Tony Stark, rather than Wakanda’s Black ruler T’Challa. The white imperialist is the standard of goodness, as Black revolutionary thought is erased. Rather than exploring “infinite possibilities,” the show retreats from the questions raised in the MCU’s most adventurous film.

“What If…The Earth Lost Its Mightiest Heroes?” is also an exercise in squashing critique. It’s perhaps the best written episode, built around a clever murder mystery as some invisible force murders the core Avengers before they can get together to fight off arch-enemy Loki.

Spoiler: the villain turns out to be Hank Pym, aka Ant-Man. Pym’s enraged at Nick Fury for recruiting his daughter Hope into his fight against super national security threats. He accuses Fury of being a selfish egotist, and implicitly questions the logic of fear, violence and death which powers Fury’s shadowy and endless post 9/11 Cold War.

But, again, Pym is mad. The goal is to show that only a deluded homicidal jerk would balk at the marshalling of superpowers against an as-yet-unrevealed but supposedly overwhelming threats. As the Killmonger episode is designed to neutralize the film Black Panther, this one squashes the mild ambivalence about American righteousness raised in Captain America: Civil War.

The episode that comes closest to pushing beyond the superhero genre default, though, is "What If... Doctor Strange Lost His Heart Instead of His Hands?" In the Doctor Strange film, world-class surgeon Strange is in a car crash and injures his hands; this leads him to embark on a mystic quest and become the Sorcerer Supreme.

In the “What If…?” episode, though, the car crash kills Strange’s girlfriend Christine Palmer. Even after he becomes Master of the Mystic Arts, Strange continues to grieve, and refuses to accept her death. Determined to go back in time and change history, he ends up obsessively seeking power and ultimately destroying the universe in his quest to bring back his love.

You could read this as a parable about the persistence of grief, and the way that dwelling on trauma can destroy a life. The problem is that the show does little to make you feel or care about Palmer’s life or death; she’s barely a character. WandaVision has the time and the inclination to make you understand what Wanda lost when her husband and her hopes for the future died. But “What If…?” isn’t interested in that kind of alternative worldbuilding. Strange’s relationship with the giant Cthulhu-like tentacle thing he consumes for power is more defined than his relationship with the supposed love of his life.

The demand for drama and super battles means the emphasis shifts away from Strange’s sadness and trauma. Instead, the plot revolves around an arbitrary taboo against change. Strange can’t alter the past because it would undo the universe; things have to stay as they are. A different kind of story about love and loss is drowned out by power blasts, mystical bombast, and the blaring fear of too many possibilities.

Power blasts and bombast are the genre, of course. If you want a brooding love story about loss, why are you watching the MCU? But while that may seem like common sense, the truth is that genres can be stretched and twisted and explored. Superhero stories like HBO’s Watchmen, April Daniels’ Dreadnaught novels, the webcomic “Strong Female Protagonist,” and even WandaVision and Black Panther have challenged the superhero genre’s commitments to violence, the status quo, whiteness, and staid narratives. “What If..,” in contrast, seems to be designed to collapse the horizon of imagination. The series promises infinite possibilities in order to get you accustomed to sadder, smaller dreams.