Boy Bogdanovich on a Female Planet

Voyage to the Planet of Prehistoric Women (1968), Peter Bogdanovich's directorial debut (under a pseudonym), is a Roger Corman exploitation programmer that came out at a fascinating and dynamic time in popular art and culture. 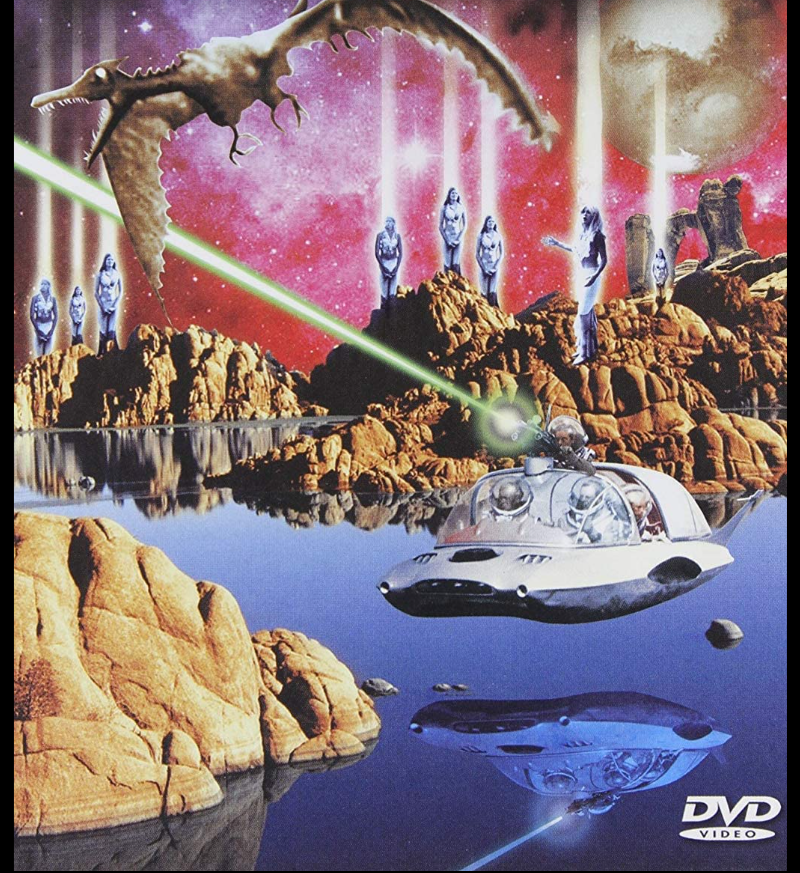 Voyage to the Planet of Prehistoric Women stands at the crossroads of several major movements in film, pop culture, sexual politics, and religion. The movie was distributed by American International Pictures (AIP) and was the final release from The Filmgroup, the influential independent production company run by Roger and Gene Corman. A drive-in programmer with a threadbare plot, technically this was a hack job, albeit one whose cut-and-paste chaos was heavily influenced by the ritualistic art films of Kenneth Anger. The movie’s co-director/narrator was innovative auteur Peter Bogdanovich (for Voyage he used the pseudonym Derek Thomas). Around the same time he completed Voyage Bogdanovich’s full directorial debut was released; this was another cut-and-paste fantasy, the Boris Karloff thriller Targets.

A large chunk of the footage used in Voyage To The Planet Of Prehistoric Women came from the Russian sci-fi epic Planeta Bur. Filmgroup had obtained domestic licensing rights for the 1962 film, but AIP bosses felt it wasn’t lurid enough for American consumption. Roger Corman and co. then took the best bits of Planeta Bur and edited them into extra footage featuring international stars, dramatic voice-overs, spacy music, and steamy/romantic elements. This resulted in the creation of two new, distinctly different works—a pulpy Basil Rathbone vehicle called Voyage To The Prehistoric Planet (1965) and the sexy hallucination Voyage To The Planet Of Prehistoric Women (1968).

Prehistoric Women’s star was Mamie Van Doren. Ten years earlier this bleached blonde femme fatale appeared in several classic juvenile delinquent films. After the 1960s she took a lengthy hiatus from acting. Van Doren and a bevy of nubile co-stars play a tribe of mysterious beauties living on the planet Venus. When they’re not lost in languid daydreams sunbathing in their ocean grotto home they’re casting magic spells that invoke nature’s fury (volcanic eruptions, earthquakes, storms) as a means of warding off evil forces. They wear ornate revealing bikini tops made from sea shells and pearls, and hip hugger bell bottoms that have a scaly/faded teal look. Their appearance is inspired by the traditional garb of the Pacific Islands and the seductive folklore of mermaids.

Themes of witchcraft, ecofeminism, and ”cargo cults" mingle with environmentalist critiques on technology, particularly as they relate to technology’s negative impact on indigenous cultural legacies. Along with the Venusians, the other main characters include an all-male group of Earthling astronauts and their robot who visit Venus on a scientific mission. Scenes involving the Earth men unfold with the sober tone of a nature documentary even though they look more like murky reels of model volcano footage shot at a school science fair. The wild space monsters that appear are just as amateurish. These include a rubbery/lethargic tentacle-beast and several lizard men who probably got lost on the way to a Godzilla audition.

While the women are surrounded by immense tidal pools, thick mists, and blasts of natural light, miniature landscapes and other flimsy plastic flourishes dominate the dimly lit astronaut scenes. It’s a dichotomy meant to emphasize the ways that Venusian magic can dwarf the power of science. The utilitarian astronauts are about as threatening as toy dolls when confronted by the elemental fury of hot space witches.

The Earth robot is carried away in a lava gusher and dumped into the ocean where its wreckage eventually washes up in the tribal grotto. Shortly before this happens the Venusians witness the death of a god (a giant terra dactyl puppet). The charred robot’s sudden appearance on the shore is then interpreted as a good omen, the old god’s demise giving birth to a new idol and a new religion. Some of Voyage‘s most poetic scenes unfold as the electronic flotsam becomes fetishized, thus completing Earth technology’s transmogrification at the hands of a sensual alien mysticism.