Horror in This House

Like a David Lynch or Alejandro Jodorowsky film, one must leave all sense of logic at the door to truly experience House. 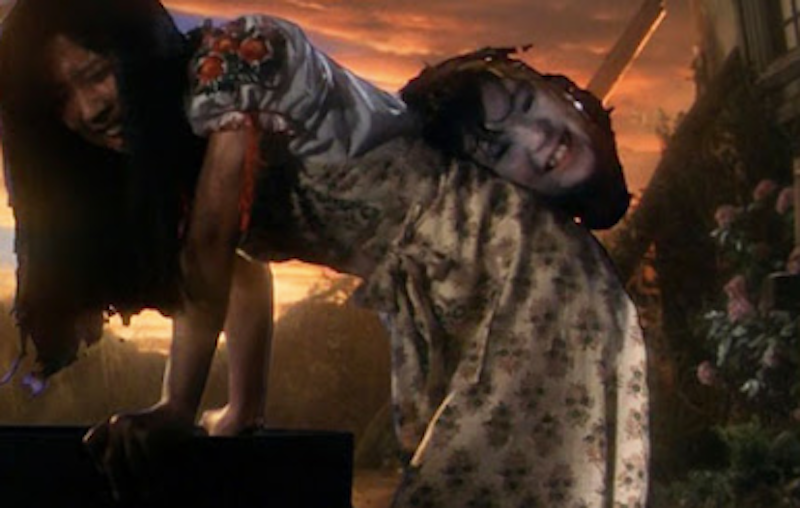 House is a film that burrows itself into the viewer’s subconscious mind and alters their perception of reality. The 1977 Japanese film has been described as a horror, a comedy, and a fantasy, yet none of those labels properly summarize it. House is post-modern; the film deconstructs itself throughout its hour-and 28-minute run time. Scenes of horror are mixed with silliness, making the viewer wonder if they’re supposed to laugh or be scared. Like a David Lynch or Alejandro Jodorowsky film, one must leave all sense of logic at the door to truly experience House.

The film follows seven teenage girls—beautiful Gorgeous, daydreaming Fantasy, musician Melody, martial arts master KungFu, innocent Sweet, logical Prof, and perpetually hungry Mac—as they travel to Gorgeous’ Auntie’s house for summer vacation. As soon as they arrive, though, odd things happen: Fantasy’s camera flies out of her hands and smashes to the ground, crystals from a chandelier fall and impale a newt passing by, and Mac disappears after going out to get a watermelon chilling in the backyard well. When Fantasy goes to pull the watermelon, she instead finds Mac’s severed head, which flies around and bites Fantasy in the ass.

None of the other girls believe Fantasy, until more strange things happen. An eyeball appears in Auntie’s mouth. Mattresses pummel Sweet. Flying logs attack KungFu. Auntie’s mirror possesses Gorgeous. A piano eats Melody. Soon the remaining girls learn the truth about both the house and Auntie, leading to a blood-soaked finale.

Despite the simple horror movie plot premise, the style of the film is anything but. Random uses of irises, double exposure, stop motion animation, background matte paintings, and sound effects repeatedly remind the viewer that this is just a movie. The dialogue, acting, and special effects are so cheesy that it’s easy to assume the film is another unintentionally funny bad movie like The Roomor Troll 2. Unlike those two films, though, the late director Nobuhiko Obayashi intentionally made Housethat way to give it a childlike feeling.

Originally approached by Toho Studios to make Japan’s version of Jaws, Obayashi—whose previous works included short avant-garde films and TV commercials—asked his pre-teen daughter Chigumi for ideas. She listed several of her fears: a house that eats girls, a mirror that attacks people, pulling a severed head from a well, and being attacked by mattresses. Screenwriter Chiho Katsura put Chigumi’s ideas into the final script, which also drew inspiration from Walter de la Mare’s short story “The Riddle.” The result, while not remotely close to Jaws, became a commercial hit in Japan (although critics hated it at the time) and inspired a new generation of Japanese filmmakers.

Underneath the film’s surrealism lie themes of war, grief, and loss of innocence. On the train, Gorgeous tells the other girls Auntie’s story, which is shown as an old silent film, with scratches and fast motion. Auntie had a fiancé who was drafted for World War II. He promised to return but was killed in combat. Later in the film, the girls learn that Auntie was so overwhelmed with grief that she died, and her spirit haunts the house, devouring any unmarried girl who steps inside while still waiting for her fiancé to come home.

The flashback scene also shows how emotionally disconnected the girls are from the war, being born years after it ended. When images of the Hiroshima bomb appear on screen, one girl comments that it looks like cotton candy. Obayashi was seven years old when the US nuked Hiroshima. “All my close childhood friends died because of the bomb,” Obayashi explained in the documentary Constructing a House, “so I wanted to write a fantasy with the atomic bomb as a theme.”

This encounter with the trauma of WWII leads to the girls’ loss of innocence, as well as their lives. Throughout the first half of the movie, everything is brightly lit, the music—by Japanese rock band Godiego—is cheery, and the girls are always giggling. Things switch during the second half; the lights dim as night falls, and the film gets bloodier as each girl is killed. Even after the final battle, the horror isn’t over. Only one girl remains: Gorgeous, who isn’t herself anymore. She has become Auntie, and she’s waiting for the next unmarried woman to arrive at the house.